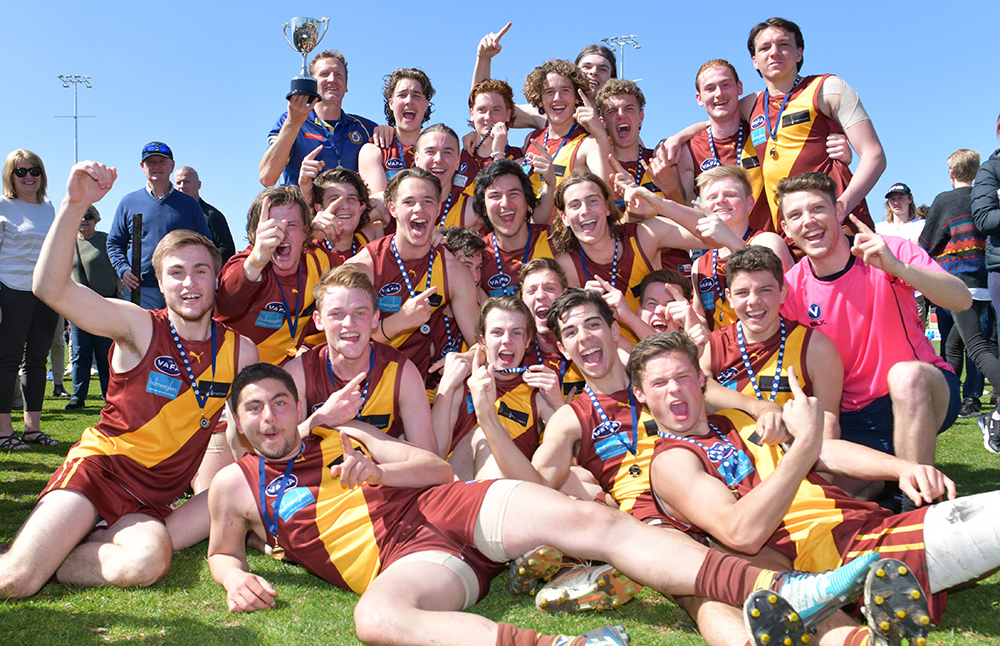 Four goals to one in the final quarter steered Old Scotch to a comfortable 23-point victory over Old Xaverians at Waverley Oval on Saturday 14 September 2019 in the Holmesglen U19 Premier Grand Final. The Cardinals scoreboard ascendancy proved too much for Xavs to overcome, despite them piling on four goals to Old Scotch’s one to cut the margin from 45 points to 23 points in the last quarter. For the premiership winning Cardinals, James Tarrant was the recipient of the Best on Ground Medal, while Connor Goodison stood tall with three goals. For Xavs, Tom Simmons was unstoppable up forward with four majors as teammate Thomas Mckay was adjudged best afield. Old Scotch listed Fraser Morrisby as their best for the day.

Old Melburnians toppled the minor premiers, Old Brighton, by one point to be crowned the 2019 Holmesglen U19 Division 1 Premiers at Trevor Barker Oval on Saturday 14 September 2019. It was a hard-fought tussle with lots of ebbs and flows, with four points being the biggest margin in the match at any break. With only a solitary point separating the two sides at the main break, Old Melburnians kicked four goals to the Tonners three to lead by four points at the final change. Both teams scored two goals apiece in the last term, and OM’s held on by the slimmest of margins come the final siren for the season. OM’s Oscar Dowd impressed with three goals, while Ben Branson (2) and Jordan Segar (2) shared four goals between them. Harry Bede was deemed the most outstanding afield, and awarded the BOG Medallion, but the officiating umpires.

Hampton Rovers were a class above Old McKinnon/Glen Eira in the Holmesglen U19 Division 2 decider on Saturday 14 September 2019, putting them to the sword by 53 points at Elsternwick Park. The match was tight in the first half and looked like it would continue into the second half, but the Rovers had other ideas with a monster six-goal third quarter to the Gryphons two. The Rovers were elite from then onwards, adding four goals to their already significant advantage on the scoreboard in the final term. Max Coughlin starred with six goals for the Rovers in a Best on Ground performance. For Old McKinnon/Glen Eira, Callum Drenth, Xavier Verdnik and Lachlan Roberton kicked two goals each. Claude Elsasser was the BOG for the Gryphons.

Minor premiers Kew finished their season off on a high as the Holmesglen U19 Division 3 Premiers, defeating St Bernard’s by 23 points at Box Hill City Oval on Saturday 14 September 2019. St Bernard’s led at the first change, but in the next three quarters could not stop the Bears as they outclassed them with eight goals to three. Kew’s Matthew O’Dicho kicked four goals in a standout performance, earning himself the BOG medal along the way, alongside a three-goal display from Darcy Twist. Misha Allinson was named best afield. No multiple goal scorers for the Snow Dogs, but Nicholas Vinecombe (1) was the main contributor for his side and was named best accordingly.

Williamstown CYMS took out the Holmesglen U19 Division 4 Premiership, outclassing Peninsula by 113 points at Waverley Oval on Saturday 14 September. The CY’s jumped out of the blocks in the opening term with four goals while keeping the Pirates scoreless. In the remaining three quarters, The CY’s booted through 17 goals to the Pirates one in what was a fine performance from the minor premiers. Hamish Tambourine (4), Jack Walker (4) and Daniel Hatzopoulos (4) combined with 12 goals for Williamstown, with Walker being named best by his team and the umpires in suite. For the Pirates, Daniel Shayler was the only multiple goal kicker with two.