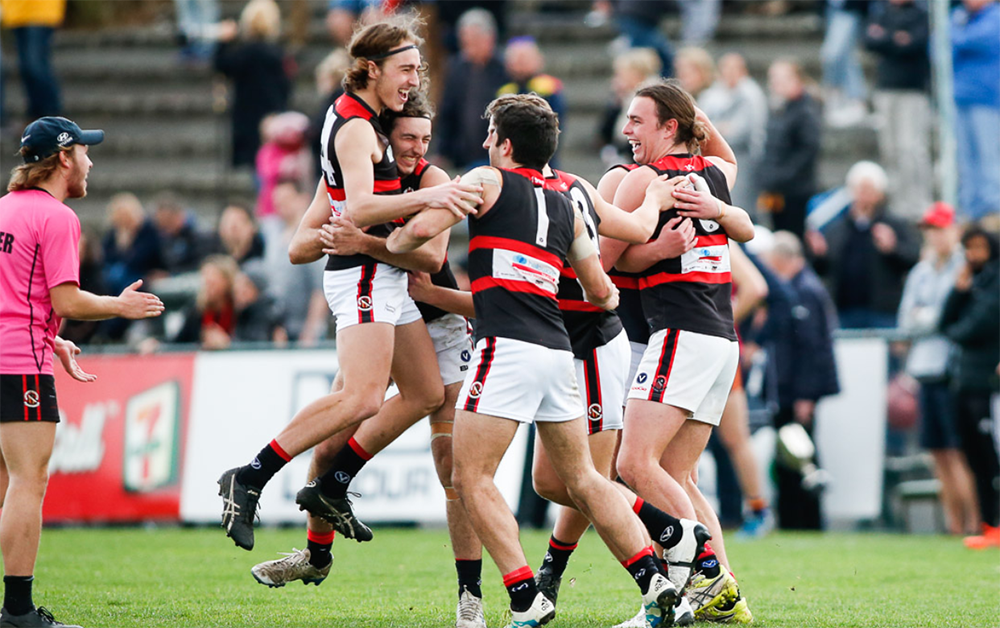 Four goals to one in the final quarter helped Old Xaverians to a thrilling nine-point victory over Old Scotch at Box Hill City Oval. Xavs trailed by as much as 17 points in the third quarter before BOG Medallist Lucas Soccio booted the first two goals of the final term in the opening 13 minutes. Scotch did hit back through a Noah Croes major but another two goals to Ed Ralph and Angus Sheedy helped seal the sensational come-from behind victory. Soccio was named best afield from the officiating umpires, while James Dalbosco and Thomas Hart were standouts. Croes was the only multiple goal kicker for the Cardinals and Tom Blenheim was their most prolific player.

Old Xaverians commenced their day in fine fashion as they took out the U19 Premier Reserve flag with a 28-point victory over St Kevin’s OB. Five goals to one in the opening half set the scene for the Xavs’ win Daniel Amicucci led the charge in a best-on-ground performance. Adam Macisaac was unstoppable up forward with six goals for Xavs, while Joshua Willmott did his utmost for SKOB, kicking five of their six goals for the day.

Old Carey proved too strong for Williamstown CYMS in the Section 2 decider, running out three-goal winners at Box Hill City Oval. The Panthers trailed by two points at the final break but piled on seven goals to four in a blistering fourth quarter. Captain Connor Virgona starred in a BOG display, while Connor Bavage kicked two goals and Nicholas Brewin four. John Desmier booted three of his own for the Panthers, while William Smyth top-scored for the day with a five-goal haul for the CYs. Josh Kellett and Harrison Carter were standouts for Williamstown.

Old Brighton stifled a valiant Mazenod and ran out 24-point victors in the Section 3 Grand Final at Trevor Barker Oval on Saturday. The Tonners opened with five goals to one in a dominant first term, before the Nodders pegged them back with three goals to one in the second. The Tonners, however, answered the call and booted six goals to three in the second half. Jake Turner starred for the Tonners with four goals and was named the BOG Medallist, while Hamish Dick kicked three of his own. Arlyn Khaiyath and Taylor Siwek impressed for the Nodders during their fightback as they shared their seven goals between seven players.

Old McKinnon/Glen Eira kickstarted a successful weekend for the Gryphons when they defeated PEGS by 13 points in their Section 4 Grand Final at Trevor Barker Oval. The Gryphons caught fire early with 10 goals to six in the first half, before the Bombers got on top with four goals to two in the third and fourth terms. Callum Drenth kicked four goals and was named best afield for the Gryphons, while teammate Hayden Bass booted four of his own. Marcus Luisetto kicked four majors for the Bombers alongside a standout performance from Thomas D’Agostino.

Aquinas capped off the minor premiership with the Section 5 flag after they defeated De La Salle by 38 points at Garvey Oval. The Bloods trailed at both quarter and half time before igniting with 10 goals to three in the second half. Adam Reichart kicked three goals in a standout performance for the Bloods alongside a four-goal display from Alexander Mantel. Vice-captain Harry Dwyer put his hand up for the Goal of the Year when he threw the boot to kick one out of the air from the boundary and slot it in the fourth term. Campbell Grech was named best afield and received the Harry Overman Medal after his dominant display. Liam Eldering led the way with three goals for De La while Samuel Mahon and Joseph Horrigan were their best contributors.