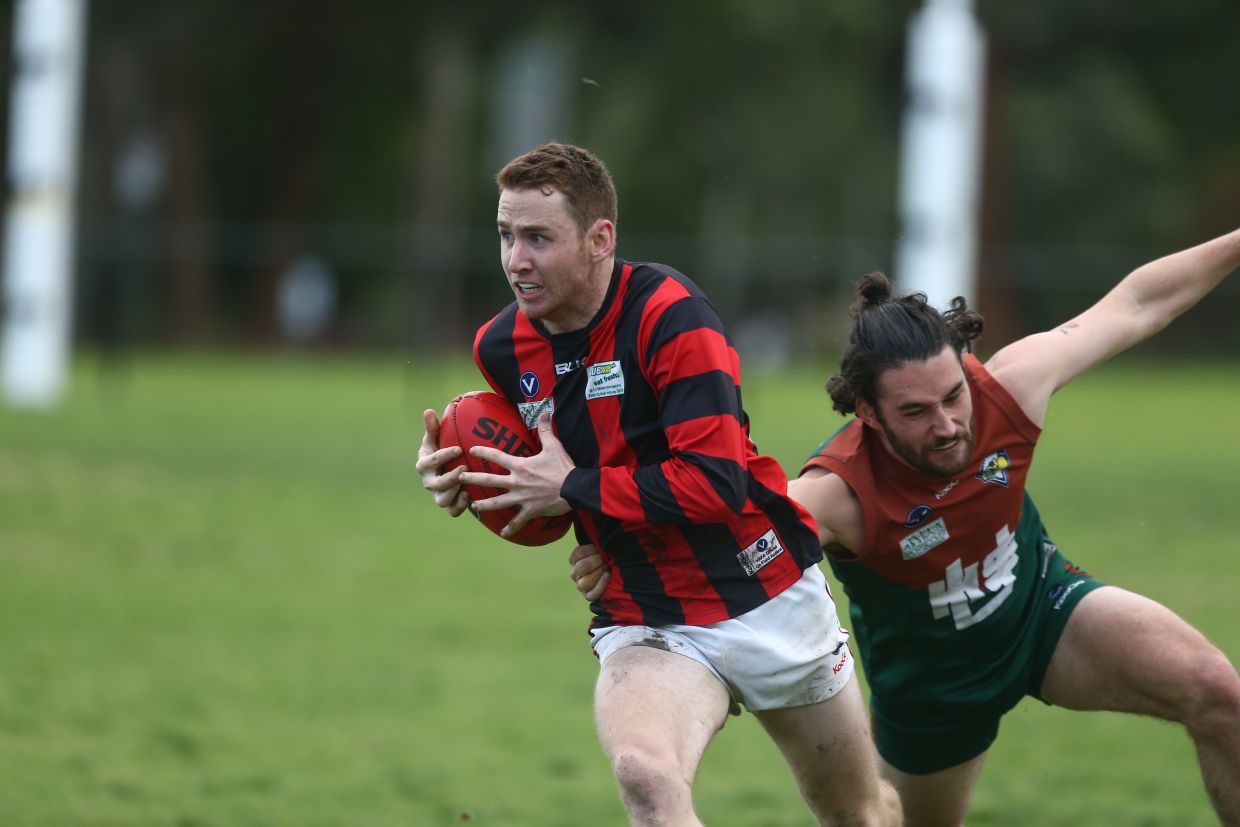 La Trobe University is playing some of the best football of any club in the third division, not named Glen Eira or Hawthorn, as they secured their place as the third best team in the division defeating the Vultures. At the top of the table the Saints and the Hawks remain undefeated with dominant wins. While behind goal-kicking ace Justin Hunter’s bag of seven, Elsternwick surprised with a win over the Cobras. Lets check out the games…

La Trobe continue their superb run of form as they overcame a lacklustre first quarter to defeat the Vultures by 16 points, 75-59. UHS-VU kept La Trobe goal-less in the first quarter and held a slim 3-point lead heading into half-time. However La Trobe rallied in the second half kicking six goals and escaping with the victory at Brens Oval. Liam Guy was fantastic for La Trobe, kicking five goals in a man of the match performance. Aaron Pincott tried all day long for the Vultures as their best player but it wasn’t enough to get the win. With the win La Trobe cement their third place on the Division 3 ladder, averaging a winning margin of 64 points during this most recent winning streak, an impressive run of form.

The Wickers overcame a second quarter slip-up to defeat a reeling Canterbury by 18 points, 92-74, behind a Justin Hunter bag of goals. Elsternwick held an 11-point lead after a dominant first quarter however the Cobras used a five goal second term to take a 13-point lead of their own heading into half-time. Inaccurate kicking cost Canterbury though kicking seven behinds along with their five goals that meant the Wickers remained within striking distance heading into the premiership quarter. Elsternwick turned to league leading goal-kicker Justin Hunter. The forward delivered with seven goals, as the Wickers dominated the second half eventually winning the game and sending the Cobras to their fourth straight defeat.

Albert Park rebounded after a tough loss last week to defeat Swinburne by 17 points, 64-47, at Beaurepaire Pavilion. The Falcons led at every change en route to the victory holding Swinny to a solitary goal in the second quarter and a single point in the third in a dominant defensive display. Tyson Cattle starred for Albert Park, while Jack Amies and Michael Brannelly chipped in with two goals each upfront to allow the Falcons to record the win. Now winners of four of their last five, the Falcons have rebounded after a disastrous opening to the season. Albert Park will look to make it two in a row with Parkside up next, while Swinburne will travel to face Aquinas hoping their goal kicking acumen returns as they failed to score atleast nine goals for the first time this season.

Glen Eira’s incredible defence again showed why it is the best in the Division, as the Saints held the Bloods to only 38 points as they dominated the Bloods, 117-38, winning by 79 points at Packer Reserve. Alex Erwin-Ross was stellar upfront kicking a five-goal haul, while it was Michael Fletcher who was the best for the Saints who remain undefeated on the season moving to 8-0. Philip Jurkovsky provided the greatest resistance to the Saints for Aquinas, however the Bloods didn’t have enough this day to challenge Glen Eira who are playing at a different level at the moment. Next week’s contest against a revitalised Swans outfit will gauge their premiership aspirations.

South Melbourne made it two wins in a row as they used a second quarter scoring barrage to gain control over a pesky Parkside side escaping from Pitcher Park with a 30-point victory, 90-60. The Swans trailed after the first siren however used a seven-goal second quarter to wrestle back the lead from the Red Devils who are getting more competitive as the season progresses. The Red Devils remained in the contest heading into the final term as they seek their maiden victory on the season but a late charge by South Melbourne sealed the win. Louis Beanland was the star of the day leading the Swans’ fightback adding to Elliot Costello kicking three goals in the victory. The Swans will have to find another gear during the week though if they stand a chance against Glen Eira in round 9.

The most devastating team in Division 3 continued their winning ways as Hawthorn remained undefeated beating Power House by 78 points, 132-54. An outstanding opening quarter that saw the Hawks score eight goals to Power House’s single behind broke the game wide open and the win was never in doubt. Justin Raiti was phenomenal kicking three goals and dominating the park, with David Kennedy and David Tremewen each booting four goals to add to Hawthorn’s enormous score total. The Hawks are tearing through sides at the moment and remain on pace to shatter Yarra Valley’s 2012 season total of 2336 points, the most by a third division side since the turn of the decade.

Swinburne need a solid win to revitalise their season and should get it over a disappointing Aquinas. La Trobe and Hawthorn should both continue their winning streaks, while Glen Eira will need to rely on their suffocating defence to fend off the Swans. Albert Park should be too strong for the Red Devils, and the Wickers will hope their win over the Cobras wasn’t a fluke as they look to make it two in a row and win over a struggling Power House.