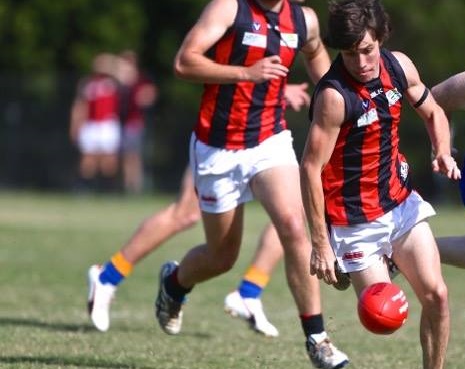 Glen Eira’s undefeated run to commence the season continued this weekend with a 13-point win against Canterbury. Julius Waras-Carstensen was named BOG on the back of three goals and a bevy of disposals for the Saints, and Rohan Walmsley and Brett Johnson combined for eight for the Cobras. The Saints sit second behind the Hawks on the Division 3 ladder, while fall one spot to fourth with their second loss for the season.

UHS-VU were relentless in their clash with Elsternwick, defeating the 11th-placed Wickers by 95 points at Elsternwick Park. A combined 10 goals from John Clarke and Nick Devereux gave the Vultures the ascendancy and targets to kick to forward of centre, while Justin Hunter did his utmost for the fourth consecutive week for the Wickers with four majors. The win gives puts the Vultures into fifth position on the ladder.

Nine goals to nil in the fourth term has helped Albert Park come from two points behind and defeat Aquinas by 54 points at the home of the Falcons. Stuart Maunder was the main recipient up forward with four goals for the Falcons, while Kirk Murray recorded his second strong performance in as many weeks. Albert Park now sit sixth and one win outside the top four, while Aquinas linger in ninth with two wins for the year.

La Trobe University flew into third position on the Division 3 ladder with a ruthless 149-point win over a Parkside unit completely devoid of confidence. While the goals were shared among 11 La Trobe players, Mitch Gleeson did the bulk of the damage with six and took his 2016 tally to 22. Alex Lockett and Liam Guy chipped in with four each, while Aaron Eastlake was the best for the last-placed Red Devils.

Hawthorn continued their unbeaten run on top of the Division 3 ladder with an unrelenting 70-point victory against South Melbourne Districts in the battle of the birds at Rathmines Road Reserve. A 10-goal opening term set the scene for the big win, with Sam Gold and Luke Piccolo combining for eight goals on the back of their match-winning 16 two weeks ago. Nathan Raiti starred in a best afield display for the Hawks, while Jordan Heis bagged three for the Swans.

Power House returned to the winner’s column after two straight losses as they defeated Swinburne University by 10 points at Ross Gregory Oval. They trailed by 27 points at the main break, but through improved effort and four Fiachra O’Deasmhunaigh majors, Power House were able to peg the Razorbacks down with eight on the ensuing 11 goals. Ben Lewis was the ebst for the Razorbacks, who sit 10th and two spots below Power House.