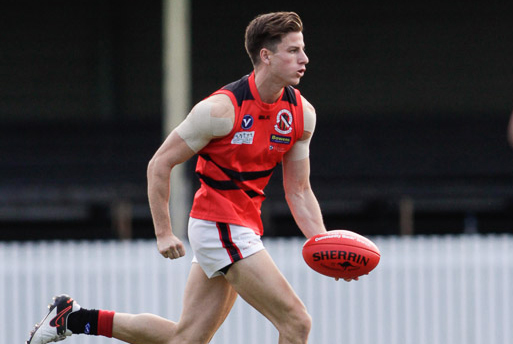 Old Xaverians fought off a relentless St Kevin’s and improved their record to 6-5 as they ran out 26-point victors at Xavier College. Trailing by one point at the main break, Xavs piled on eight goals to four in a fiery second half, with Brendan Goss leading from the front and kicking five of his six in that time. Dan Noonan consistently repelled SKOB forward thrusts for the duration of the match, while Josh Anderson, Tomi Johnston and Denis Symeopoulos starred. Jordan Gysberts and Rohan Bail were SKOB’s best and Jack Holden was the most impressive player on the field at half time. The win puts Xavs just half a game outside the four, while SKOB fall to eighth on the back of the loss.

St Bernard’s proved the reigning premier should never be written off as they defeated Old Melburnians by nine points at the Snakepit for their second win for the year. A nine-goal to two opening half set up the win for the Snow Dogs, with OMs fighting back with eight goals to three in the last two quarters. Nathan Kazuro dominated in a best-on-ground display for the Snow Dogs, who were still missing star onballer Tom Sullivan. Darren Colaco kicked four, while Michael Caven chipped in with three. Matt Thomas and Tom Paule were at the forefront of OM’s comeback but they now fall to fourth on the William Buck Premier ladder.

A nine-goal fourth quarter has helped University Blues blow Old Carey out of the water to the tune of 54 points at Carey Sports Complex. Leading by just eight points at three quarter time, the Blues hit the accelerator and booted 9.4 to the Panthers two straight. Tim Geappen was the main destroyer up forward with seven goals in his second game back from injury, while Tom Quinn kicked four and Jeremy Mugavin dominated from the midfield. Julian Rowe gave his best game for the season with five of the Panthers’ nine goals, and Luke Crozier was their best.

University Blacks kept Old Trinity to just two goals for the match in their 48-point victory at Uni Oval this afternoon. Trailing by four points at quarter time, the Blacks kicked nine of the next 10 goals as their defence stood strong and allowed the T’s just one more (in the fourth term) for the remainder of the match. Josh Steadman was outstanding yet again for the Blacks and earnt best-on-ground honours, while Nick Batten, Lochie Dornauf and Tom Sharp combined for six goals. Doug Morris was the best for the T’s, who have now fallen outside the top four after losing four of their past five.

Collegians came from 23 points down at half time and ran over the ladder-leading De La Salle for a stunning 24-point victory at Harry Trott Oval. Three goals to one in the third term reduced De La’s margin to just six points before the Lions stormed home with five unanswered majors in the final quarter. Tom Penberthy continued the standout form he’s showcased all season as BOG for the Lions, while Julian Eimutis, Dom Russo, Will Tardif and Malcolm Neiwand kicked two goals each. Hugh Nicholson was the sole multiple goal kicker for De La and Brendan Close fought hard all day. The win puts the Lions two points outside the four, while De La lose their third for the year but remain atop all others.