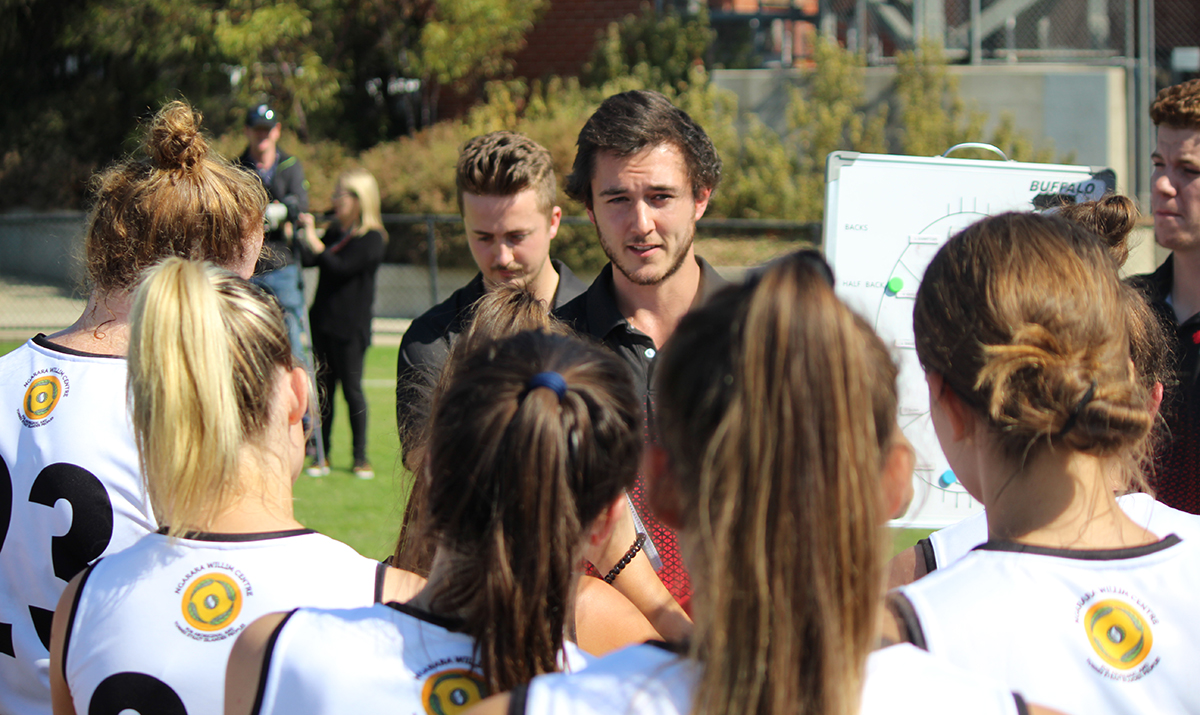 Mitchell Lower has signed on as senior coach at the RMIT University Redbacks for 2021 as clubs begin to emerge from the lost year of COVID-19.

25-year old Lower was the inaugural senior coach of the Redbacks in their maiden VAFA season in Premier C Women’s in 2019. Following an encouraging season in which RMIT claimed five wins including four in as many matches to end the season, he was reappointed for 2020.

Although the cancellation of the VAFA season put the brakes on the development of the Association’s newest team, Lower, who has been mentored by Collingwood AFLW assistant coach Scott Gowans and worked alongside Gold Coast player Sarah Perkins, believes RMIT will be “really well positioned” to capitalise on their first year upon the resumption of pre-season training.

“Our goal was to win a premiership, as is every team’s goal at the start of a season. But we were quietly confident that our momentum from the end of our inaugural season had carried over and we were on our way to something special. We are lucky we have those building blocks still intact. Season 2021 is going to be fun.”

In the eight months following the initial shadow of COVID-19 restrictions and distancing, RMIT’s players have maintained connection via Zoom meetings that have combined fitness sessions and general catch-up chats. Lower encouraged the sessions not only to maintain retention across a long and uncertain period in which footballers could have lost interest but also to keep together the camaraderie of the growing team.

“I’ve missed the social aspect a lot. Football is underrated in its ability to bring people together. We all share one purpose whether we are at training or on game days. It’s special.”

In speaking on what he is looking forward to most about the return of football, Lower touches on the culture and mood around RMIT.

“As a coach, I want to say that it’s going to be football related, but to be honest it would be good just to get the girls together again and see the happiness that brings. There will be a focus on drills and getting a baseline of fitness, but I just want it to be fun for them. They have missed out on a whole season and Melbourne has gone through a pretty dark period. So they deserve to have some fun.”

The announcement of Lower as senior coach comes as RMIT also confirms the re-signing of specialist coaches Chris Falcke and Chris O’Connor to the positions of Kicking and Acceleration Coach and Assistant Coach respectively.

RMIT President Sally Tanner says the three coaches will continue to be “a driving force” behind the club’s growth.

“To retain RMIT Alumni Mitch Lower is a great vote of confidence for our executive, given he is now one of the most experienced senior women’s coaches in VAFA.

“Despite all the challenges of 2020, as a new club we couldn’t wish for more than to retain both these key personnel and the backing of RMIT University. We are also excited that announcements around our Medical and High-Performance programs for 2021 are imminent, as is an open invitation to our students and the broader community to join us for a kick!”