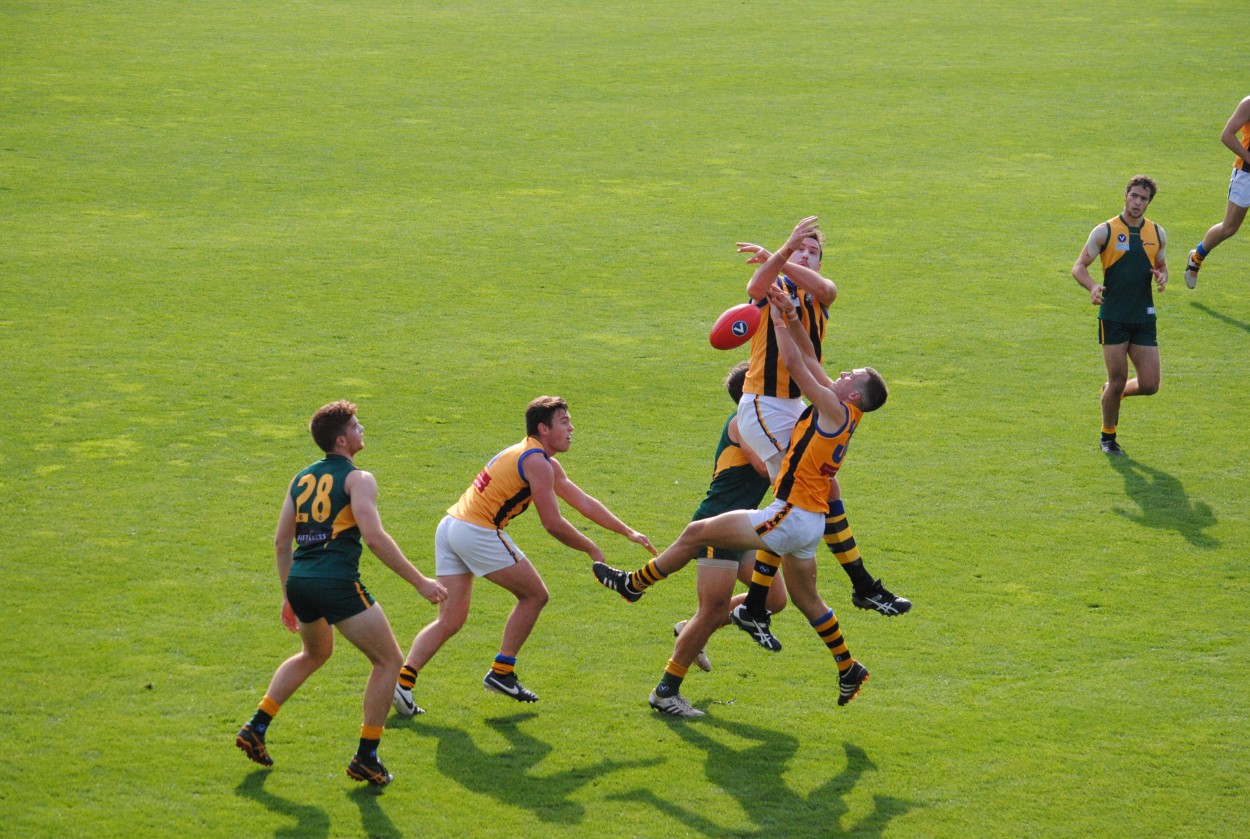 It was a typical winter’s day in Melbourne; wet, arctic like conditions greeted all on Saturday, but the footy must go on, and the results were big this weekend.

St.Kevins took on Old Trinity at T.H.King and made up for their poor performance the previous week against the Old Xavs with an outstanding display of footy. They blew Trinity out of the water with 5 goals to 1 in the first term and were never troubled on their way to a 21 goal rout of the hapless Old Trinity side. Webb followed on his good form from last week with another BOG performance and was closely followed by Spence and Massey who were very good in the big win. For Trinity, Thuring played a good game as did Robertson, but it was a tough day for all against a definite flag contender. Lewis and Dicintio were the major goal kickers for the match kicking 5 and 4 respectively.

Old Scotch would have known a tough day was on the cards at St.Bernards, but their slim hope looked improved with the wet weather. That wasn’t the case. A 5 goal to 1 first term set them up for their 171 point demolition of the struggling Scotch, who have played some decent footy all year without reward. They came up against a beast on Saturday and there was no stopping the Snowdogs. They kicked kicking 17 goals in the second half and kept Scotch goalless in the final stanza. Sibbald has had a big year and he kicked 5 while Martin got 4 of his own. Delzoppo was unstoppable for Bernards and Larkin had a big day as well. Holding and Daggian were the best of a bad bunch for Scotch, who will need to fight hard to avoid relegation this season, with OMs leap frogging them and Uni Blacks only below them on percentage.

Beaumaris continue to fly under the radar this season, going about their business quietly, claiming wins and looming as the biggest threat to the top 3 teams. They sit 4th, 2pts off top spot but have a tough draw to end the year. With SKOB next week, Xavs the week after and Bernards to finish the year, they will need to win at least two of those to really stamp their authority on this comp. They got the job done against Uni Blacks by 105pts on Saturday, with Gibbins (3) and Zagni (2) performing well up forward, while Gregory played a great game in the big win. Things aren’t looking good for newcomers Uni Blacks, but Chalkely and Mills are having outstanding seasons in what has otherwise been a tough year for one half of Melbourne Uni.

De La Salle took on an in form Uni Blues at Waverly and got the job done. Blues were looming as a potential threat to the top 4 teams but faltered in the wet conditions with accuracy being their biggest enemy. The 68pt win was De La’s 6th of the year evening up the ledger at 6-6 and keeping them in the hunt for finals action. Vawser continued his stellar season putting forward another BOG performance and putting his name in lights for a potential League B&F nod. Curnow and Fry were among the best for Uni Blues who will need to bounce back next week to keep their slim finals hopes alive.

The Old Xaverians went into the game against Old Melburnians worried about what the home side would bring to the park, having been in good form of late. OMs are a dangerous side and with Xavs undermanned, this presented a great opportunity. In the end the Xavs did it easy, winning by 99pts at Albert Park. Sam Cleeve was very good up forward kicking 8 goals with Wynne playing second fiddle with 4. Lucas and Ongarato were among the best. Watson kicked 3 of OMs 8 goals and Lapping and Monk showed some brilliance throughout the day. A tough showing from the Old Xavs who were ultimately far too good for O’Ms in very wet conditions.