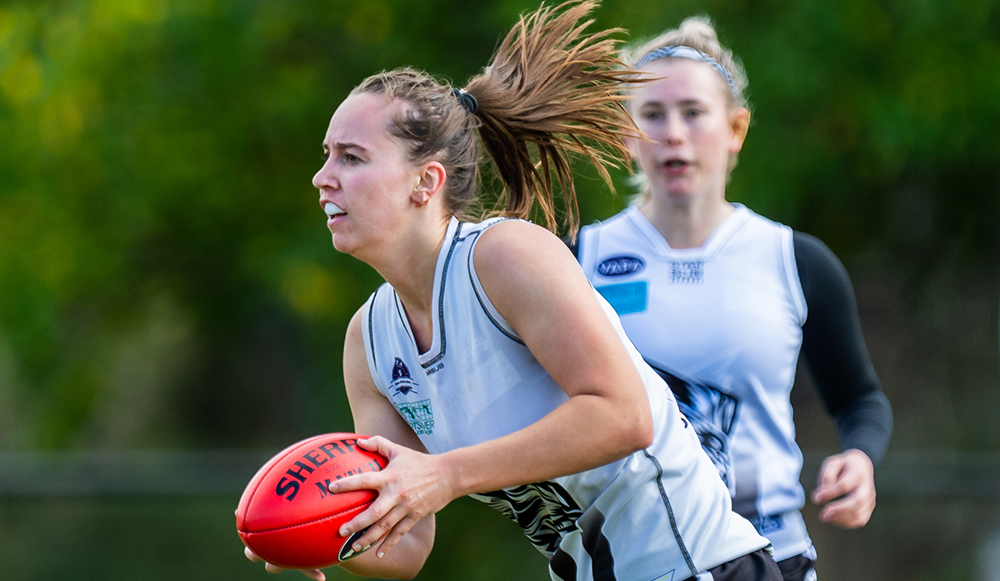 UHS-VU went into the game as hungry as they’ve been all year, after a devastating loss at the hands of Aquinas last week. The Snakes showed some grit against Ivanhoe but were no match in the end, falling short by six goals. This game started how you would have pictured it with UHS-VU flying out of the blocks, kicking four goals to none in the opening term to lead by 26 at the first change. The Snakes showed plenty of heart in the second term as they managed to boot their first major of the game through Stefanie Talarico, although three goals from UHS-VU would mean their lead would be extended to a healthy 38 points at half time. UHS-VU came out of the half time huddle, aiming to kill the game in the third quarter, however inaccuracy only allowed them to add a further one goal whilst keeping the Snakes scoreless. UHS-VU held a 48-point buffer, entering the final term. The Snakes would’ve been proud of their last quarter effort as some excellent defensive work meant that UHS-VU would only manufacture the two behinds. The Snakes were kept scoreless in the second half as UHS-VU cruised to a 50-point victory. The return of Madeline Hince for UHS-VU was massive as she kicked three goals while Marlo Zambelli and Megan Pollock were also amongst their best. Claire Schelske and Stefanie Talarico were amongst the Snakes best. UHS-VU travel to play Mazenod next Sunday in what looms to be a season defining game for both sides whilst the Snakes continue their pursuit for their first win of the year when they host the Renegades.

The Bulls were disappointing last week in their clash with St Bedes/Mentone, going down by 77 points, and needed a strong response against the premiership favourites. Aquinas headed into Round 5 with an abundance of confidence after trouncing UHS-VU last week by 76 points. The Bulls looked lack lustre in the opening quarter as Aquinas piled on early scoreboard pressure to take a 26-0 lead into quarter time. More of the same ensued in the second term with Aquinas adding a further four goals as well as keeping the Bulls scoreless to take a 52-0 lead into the half. Some slight inaccuracy in the third quarter saw Aquinas manage three majors and five behinds as they were able to extend on their half time lead by another 23 points. Some further inaccuracy in the final term had Aquinas kicking four goals and six behinds in what was their best quarter of the game, all while keeping the Bulls scoreless as they ran away to a whopping 105-point win. Aquinas had nine individual goalkickers with Monique Elliot and Melanie Hogg kicking three each as Laura McHugh and Sophie Patterson were able to add two of their own. The Bulls will look to transform their fortunes next week when they play away to the in-form Ivanhoe. Aquinas will march into Round 6 undefeated as they host a tricky Tigers outfit.

It was very difficult to pick a winner from this fixture with the Tigers sitting pretty in second on the ladder and Mazenod hot on their tails in third. The Tigers thrashed the Bulls last week by 77 points as Mazenod had a lazy 39-point win over the Renegades. The Tigers applied pressure early but were unable to capitalise on the scoreboard as they managed three behinds to Mazenod’s no score to quarter time. Both sides hit the scoreboard in the second term as the game began to shape as one of the best that we’d seen so far in the competition. Mazenod kicked two goals to the Tigers one as they held a minimal three-point lead into the main break. The third quarter was almost a complete stalemate with the only score being a behind from the Tigers as they were once again unable to capitalise on a good quarter of footy. Mazenod lead by just two points heading into the final quarter. Missed opportunities galore in the last term left the door open for either side to pinch the four points but it was Mazenod who held on in the end over an inaccurate St Bedes/Mentone team as they won by just three points. Adele Kerley kicked both of Mazenod’s goals as Tia Pastore was the Tigers lone goalkicker. The Tigers have a huge challenge against Aquinas next week in a game that will definitely tell them where they’re at. Mazenod host UHS-VU in what will also prove to be intriguing contest.

Ivanhoe entered this game as the favourites on the back of two wins in a row as the Renegades were outclassed by Mazenod last week. Although, the Renegades started the game ferociously, being dangerous in front of goal, but also being strong defensively, as they kicked the only goal of the opening term to hold a six-point lead into quarter time. Ivanhoe brought the heat in the second term as they kicked two of the three goals for the quarter, trimming the Renegades lead to just four points at the main break. Ivanhoe’s accuracy was proving the difference in them staying in the contest. They added a further goal in the third term whilst the Renegades conjured one goal and two behinds, pushing their lead out to six points at the final change. The Ivanhoe girls knew this was a crucial game in terms of them staying in touch with the top four. With this, they brought inspiring effort in the final term to kick one goal and two behinds all whilst keeping the Renegades scoreless as they scraped home, after being behind at every break, by just two points. Emily Taylor kicked two goals for the Renegades as Nolene Kingi also managed to hit the scoreboard. Caitlyn Cowie booted two for Ivanhoe as Rachel McLean and Charlotte Toussaint rounded out the rest of their goalkickers. Ivanhoe host the Bulls next week as they look to continue their good form and the Renegades will play away against the winless Richmond Central.