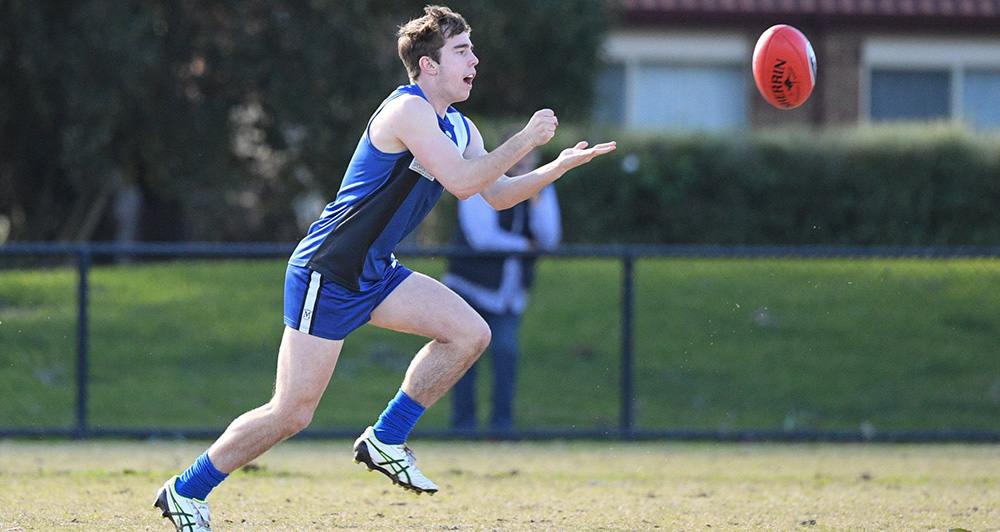 It was a tough day out for UHS-VU as they felt the full force of Hampton with the Rovers cruising to a 165-point victory. It was going to be a long day for the Vultures after they found themselves down by 110-points at half time and things did not improve as the day went on. Hampton is showing themselves to be a real contender early as they have put up a second impressive win in consecutive weeks. Max Coughlin was instrumental with six majors in a best on ground performance for Hampton who will be encouraged by 11 individual goal kickers. Their biggest test will face them this week as they face an undefeated Monash at home. UHS-VU will look to be much more competitive when they play Old Mentonians at Keysborough Playing Fields.

In the match of the round, Old Geelong beat Old Ivanhoe by two points at Chelsworth Park. After kicking 2.6 in the first quarter, Old Ivanhoe had all the play but could not capitalise allowing the Oggers to stay in the game at the half. A tight third saw the two powerhouses tied entering the fourth and it was four goals from Christian Hatzis and a dominant display from Joe Griffiths (who booted three himself) that got Old Geelong home by two points in a thrilling final quarter. Old Ivanhoe star Michael Mitris had a shot from 40 metres out directly in front after the siren, but an unfortunate miss just left of the target ensured the Oggers took away the crucial win. Harrison Reid was terrific all day for Old Ivanhoe who will look for a well overdue first win against Mazenod this week. Old Geelong will look to stay undefeated as they host Preston who will be yearning for their first win.

Ormond walked away comfortable 82-point winners against Preston at E.E. Gunn Reserve. Inaccurate kicking from the Monders kept the Bullants in the game early, however, in the end, Ormond kicked away with an impressive 40 scoring shots to 13. Youngsters Max Kennedy and Joe Nowell impressed, while Callum Cathcart continued his impressive start to the season kicking four goals taking his season total to 12 after the first two rounds. Sean Battistello played a terrific game in a long day for Preston. The Bullants will travel to face the unbeaten Old Geelong this week in search of their first win in 2021. Ormond will be tested this week when they face a strong Marcellin outfit at Marcellin College.

Five goals from Nick Darling allowed Monash to comfortably run over Old Mentonians by 88-points. An 11 goals to three first half was enough for the Blues to hold on despite an impressive showing from Kyle Conlon who kicked three goals for the Panthers. Macgregor Cameron continued his strong start to the season with another best on ground performance. Monash will look to move to 3-0 as they take on a red-hot Hampton side in what looks to be the match of the round. Old Mentone will host UHS-VU in a must win game for the Panthers.

In what was the other scintillating matchup of the round, Mazenod walked away 4-point winners against Marcellin at Marcellin College. In a back-and-forth game all day, the Nodders held on after entering the fourth with a nine-point lead. Josh Atwell and Jordan Perry were impressive in the Eagles’ late push; however, it was three goals from Mitchel D’Angelo and best on ground performance from Damian Byrne that got Mazenod over the line in an impressive win that will put the league on notice. The Nodders will look to make it two on the trot as they take on a feisty Old Ivanhoe team who will look to secure their first win of the season. Marcellin will look to bounce back against Ormond in what looks to be an interesting matchup.