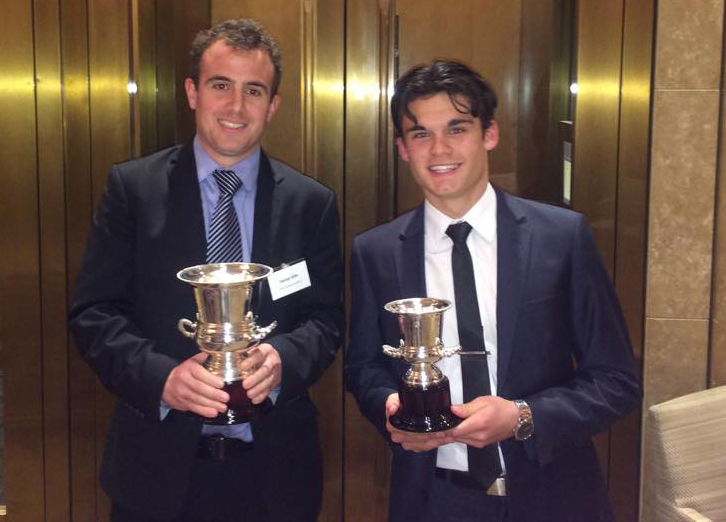 While all players are making their return to pre-season training following a well-earned holiday period, our VAFA umpires are no different as they prepare for the upcoming season.

Umpire of the Year, International Rules umpire and two-time William Buck Grand Final appointee, Daniel Silfo, knows as well as any umpire the effort needed to succeed after he enjoyed his most successful season to date last year.

VAFA Media caught up with the whistle-blowing star and discussed all things from his recent successes and future goals, to the pre-season campaign undergone by all VAFA umpires.

What a season 2015 was for you personally. You umpired in the William Buck Premier Grand Final, toured Ireland/England and won the VAFA Umpire of the Year at the VAFA Woodrow Medal and Awards Night. How did it feel to be recognised as the VAFA’s best umpire after such a big year?

Yes 2015 was a big year for me personally after being injured for the entire 2013 and finishing with the D1 Grand Final in 2014. My main aim for last year was to really enjoy umpiring, to achieve a high level of consistency from week to week and for there not to be a massive difference between my best and worst game. There are many umpires that could have won the umpire of the year award. To be recognised as umpire of the year was unexpected but something that I was certainly happy to receive. Umpiring my second Premier Grand Final, four years after my first one with Matt Oakley and Peter Bailes in such a close, tense and hard-fought game and not being talked about or noticed was the most satisfying part of 2015.

I spoke with Jeremy Mugavin earlier about the VAFA Ireland/England tour late last year, of which you were selected to represent the VAFA as the sole umpire. How does an experience in a different country and umpiring a foreign sport with a different set of rules assist your development?

Being able to officiate with Ireland’s top GAA referees (all of which have refereed All Ireland Finals and Australia (AFL) v Ireland in International Rules) was a great learning experience. To be able to see how they prepare, manage a game and relate to players and officials in such a calm and relaxed manner was extremely beneficial. At local league level we understandably don’t get the chance apart from the odd attendance at training from AFL umpires to learn from them.

You wrote a blog on the Ireland and England tour titled ‘Silfo takes on Ireland’ and highlighted everything you had the opportunity to experience. What were your favourite moments and experiences from the trip?

As part of being selected to tour it was expected that I write a diary about the trip. The VAFAUA webmaster took a bit of poetic licence with the title of the diary! I don’t really have a favourite moment or experience from the trip other than I enjoyed the whole experience. It allowed me to get to know players, officials and parents away from the combativeness of a Saturday afternoon. The players were fantastic and it was great to get to know most of them away from the brief hello you might say on a Saturday.

Looking ahead to the 2016 season, what does pre-season training involve for a VAFA umpire?

We start back as a group on Monday 1 February and will train every Monday and Wednesday night until around Easter time. Essentially most of our pre-season training involves running, running and more running. Most of the senior squad of field umpires would have commenced their own running programs last November/December. We usually have a two km time trial and a beep test in March.

From a field umpire point of view Head Coach Tony Hales will run a number of coaching sessions. We will watch a lot of video examples in regards to understanding the laws of the game including any rules changes which may be introduced for 2016.

After achieving so much last year, what are the goals you hope to attain in 2016?

It is going to be hard to replicate 2015 however the obvious goal is to umpire a third Premier Grand Final. No field umpire has umpired consecutive Premier Grand Finals since Luke Holmes in 2011/2012 so it is not an easy task. Over the past two or so seasons we have lost quite a number of experienced umpires (mainly as they were promoted to the VFL) which has resulted in less depth in Premier sections. One of my main goals along with the rest of the senior squad will be to continue to assist and encourage young/new umpires to get the best out of themselves. The stronger we are as a group can only benefit the competition as a whole.

I would encourage anyone thinking about taking up umpiring to contact Woody and come down and give it a go. It is amazing how many former players take up umpiring and love it.