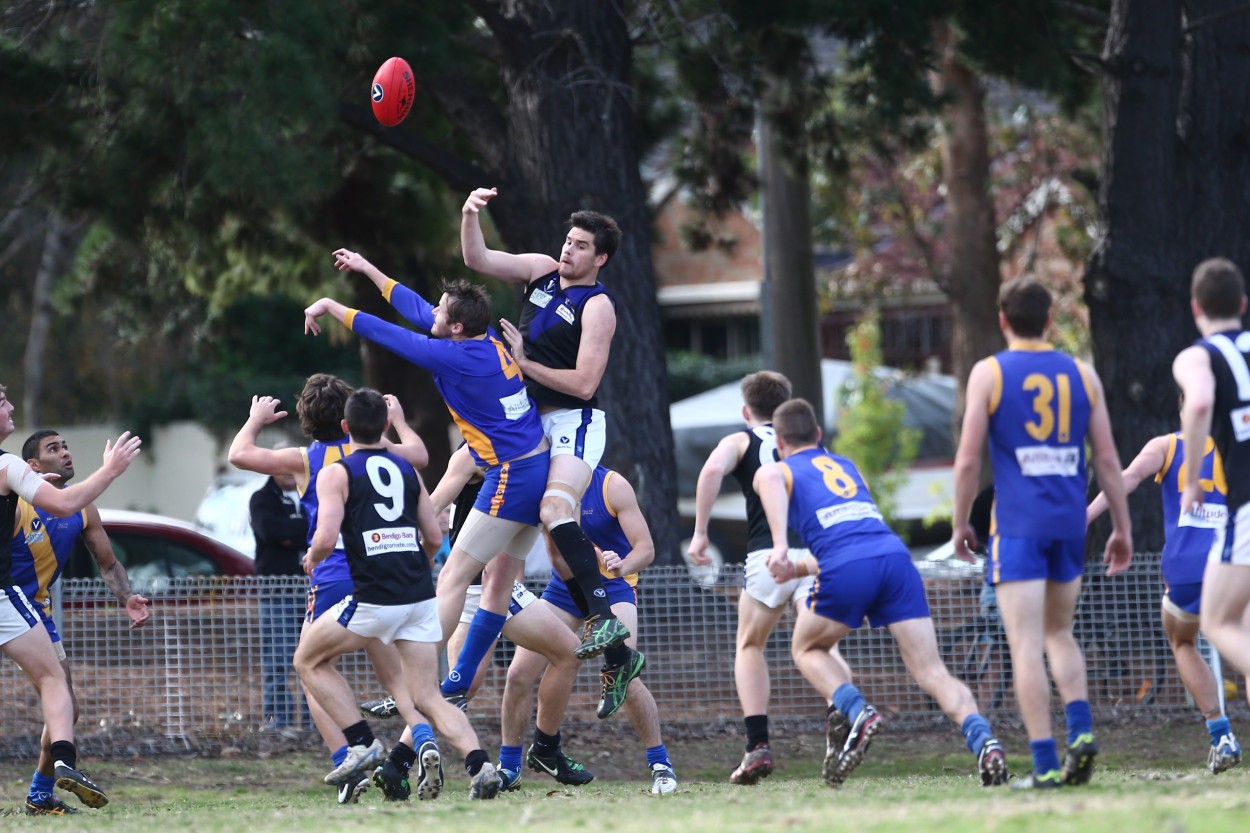 OLD BRIGHTON OFF THE MARK

In Premier Section, half way through the third term, Old Trinity looked beaten against Old Scotch, but the T’s rallied to almost parity before kicking out to a match winning lead in the final term. Weatherson’s four goals saw them home as Seed also booted four for the Cardinals in a losing side. Old Scotch kicked lates goals before the margin rested at a 10 point Old Trinity win.
St Bernard’s took their season to five wins and one loss and in the process saw that Old Xaverians were the reverse of those numbers as the Bernies won by 31 points at Toorak Park. Merrington kicked six goals in the win as Matt Handley added another four goals. The loss sees Xavs make their worst start to a season since 1996.
Uni Blacks join both Old Trinity and St Bernard’s in equal top spot, all three sides have five wins after Blacks proved too strong for Beaumaris at the Aquarium. Blacks trailed at quarter time but gained control in the second before extending their lead at each siren after that. Blacks triumphant by 57 points.
Collegians overturned a 20 point half time deficit to defeat De La Salle on their own turf by 8 points. In a tight second half, Harry Croft’s three goals contributed to Collegians third win of the year that sees them a game outside the four.
Old Brighton has broken their duck in 2014 with a resounding 56 point win over St Bedes/Mentone Tigers at Brindisi St. Dan Anthony bagged five goals in a much deserved win for the Tonners.
It is amazing to see last year’s Premier Grand Finalists in the bottom two spots with just two wins between them after six rounds, but Xavs (10th) and St Bedes/Mentone Tigers (9th) have made any chance of a grand final appearance very difficult from here.
So a third of the way through, Blacks are top from St Bernard’s and Old Trnity on percentage with Beaumaris holding fourth from the chasing Old Scotch and Collegians.

In Premier B it was a day of statements. Uni Blues continued to do what they have done to most of the competition – barring Old Ivanhoe – with another huge win at home over Caulfield Grammarians. The margin was 106 points as McKenzie’s four goals led the line as Blues again kicked more than 20 goals as a team.
Old Carey bounced back in the best possible fashion with seven goals straight to stun St Kevin’s at Bulleen. The Panthers never let up either as they celebrated skipper Cam Howat’s 100th game in style. Karageorgiou kicked four goals for SKOB, but so did Evans and Fordham for the home side. Old Carey had 12 goalkickers in the 79 point win that sees them join St Kevin’s on five wins each.
Old Melburnians won a crucial game against Old Ivanhoe at the Junction Oval by 50 points. The OMs jumped out of the blocks well, but were pegged back before responding in the second half. Adrian Delmonte kicked four goals for the Hoes, but OM’s had too many answers at the other end as they shared the load. Old Ivanhoe sit on the bottom of Premier B just seven matches after a magnificent Premier C flag.
Old Haileybury fell into difficult territory by going down to Mazenod by 29 points. Three goals from veteran Ben Phibbs and a couple from Heath Black saw the Nodders win their second game of the season. The win doesn’t lift them out of the bottom two, however, Old Haileybury in 7th are just half a game away.
Fitzroy had a monster 101 point win over AJAX at Brunswick St Oval. Bisetto and Fenton bagged four goals each in the rout that saw the Roys replace the Jackers in the four.

In Premier C, Marcellin continued from where they left off last week with another 20 goal win, this time over the hapless Banyule. Three Eagles kicked give goals each Bolger, McPerson and Millsom all snaring a handful whilst Gasparini fell one short with four. These two sides sit at opposite ends of the ladder and it wasn’t hard to see why as Marcellin went on their merry way with the 123 point win.
In the match of the day, Hampton Rovers prevailed over Oakleigh by two points at Scammel Reserve. All square at half time and the Krushers leading by a point at three quarter time this was the definitive nail biter. Paola kicked five in a losing cause.
PEGS returned to the winners list with a 24 point win over Ormond at the Runway. Forrest kicked four goals in the win as PEGS moved to outright second. Ormond find themselves in 9th.
The wheels continued to fall off for Peninsula after their promising start to the season took another backwards step with their 50 point loss to Monash Blues. The result is magnified by the fact Peninsula were at home and Blues were never really troubled. Whilst both teams are 4-3, it’s Blues in 3rd that have the momentum and the Pirates are 7th wondering how they can rediscover it.
Parkdale Vultures secured a very important win at home, holding out Old Camberwell by four points. Both sides are now 3-4.