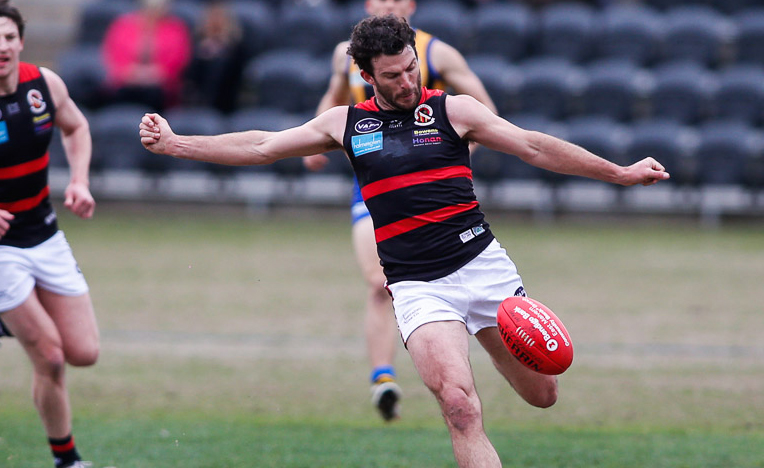 Old Melburnians kick-started their 2021 campaign under new coach, Paul Satterley, with a comprehensive 54-point win over Caulfield Grammarians at Elsternwick Park. The Fields started strong with the first two goals of the game, but OM’s took control thereafter with 18 goals to seven. Sam Dunell was a class above with three goals and BOG performance, while Gus Borthwick and Josh Freezer were outstanding. OM’s newbies, Will and Ned Nichols and Ben Haysman, provided plenty of dash, while Caulfield was served well by Nathan Peterson and Isaac Morrisby. While others were falling to cramp late in the game, Peterson put his hand up for an early contender for mark of the year with a screamer in front of the clubrooms, while Julian Debosz will be watching his goal from 60m on repeat.

Old Scotch sit on top of the William Buck Premier ladder after they defeated Old Trinity by 66 points at Camberwell sports Ground. Leading by 32 points at half time, Scotch kicked four unanswered goals in the third term before outscoring the T’s again in the last. Andrew Jelbart top-scored with three goals for the Cards, while Sam Dawborn was best afield in just his second senior game. Jack Lefroy and Oliver Scott each kicked two goals for the T’s.

10 goals from Rohan Bewick led Old Xaverians to a 32-point Round 1 win over St Bernard’s at the Snake Pit. Xavs, who had 10 wins from their 10 games today, kicked 17 goals with Bewick catching fire from the first bounce. Alex Trigar and Jack Noone were named next best, while Marcus Holland did his utmost for the Snow Dogs by booting six of their 11 majors. The win is the perfect start for new Xavs coach, James Byrne.

Three unanswered goals in the fourth quarter helped St Kevin’s OB to their first win of the season, defeating Collegians by 30 points at TH King Oval. SKOB led by 12 points in a seesaw battle between the two powerhouses, before Bulldogs premiership player Tom Boyd secured the win with his four goals on debut. Nick Wood kicked two in a standout display, while Viv Michie and Josh Prudden – also on debut – led the charge for the Lions as their best players.

University Blues and Old Brighton will face off at Elsternwick Park tomorrow.