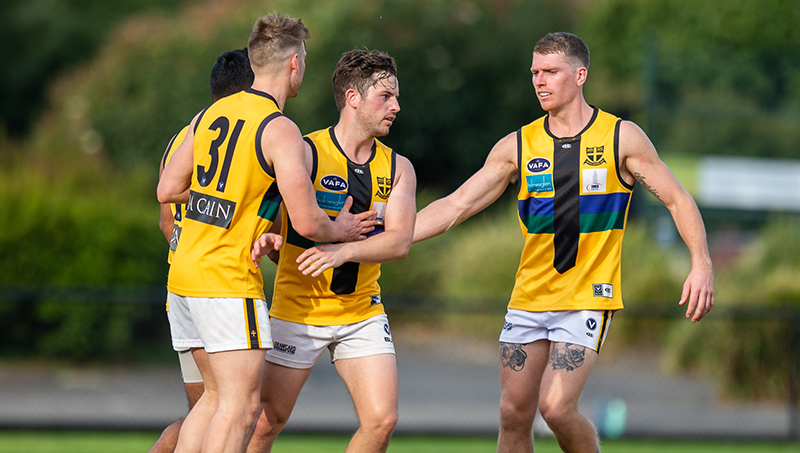 Old Peninsula caused the upset of the round in Division 1 Men’s when they defeated Prahran Assumption by three points at Harry McDonald Oval. Despite kicking just five goals from 22 scoring shots, the Pirates were sensational as they held off the fourth-placed Two Blues with two goals to one in a thrilling final term. Angus Groves and Thomas La Brooy were outstanding for the Pirates while Brett Macaulay kicked two of their five goals. It was the Pirates’ second win of the season, but they’ve now drawn equal with Oakleigh (8th) with two wins. Jack Matherson and Matthew Clifford were the best for Prahran as they still sit comfortably in fourth spot with a two-win buffer over the Saints in fifth.

After losing their first four games of the season, St Mary’s Salesian have climbed into fifth spot on the ladder following their 16-point win over Brunswick on Saturday. The Saints trailed by nine points at the first break before kicking into gear with five goals to two in a match-winning second quarter. Louis Holmes and Thomas McDermott top-scored with three goals each for the Saints, while William Coten was best afield for the second week in a row. Ben Wilson and Maxwell Naughton were standouts for NOBS as they edge ever closer to their first win of the year.

Kew made it four wins in a row and eight for the season, but it wasn’t without a significant fright, as they edged past PEGS by four points at Victoria Park. The Bears kicked five goals to four in the opening term and led by one goal which would end up being the highest margin at any break throughout the day as both sides went goal for goal until the final siren. Michael Henderson was named BOG for the Bears for the second time in three games, while Michael Hannan (4) and Peter Couvalias (3) were the main contributors in front of goal. The three votes though will likely end up with Riley Simmons after he kicked eight majors for the Bombers and almost single-handedly dragged them over the line.

The ladder-leading Old Camberwell had very few issues in their Round 11 clash with Therry Penola, running out 60-point winners at Gordon Barnard Reserve. The Wellers trailed by one point after a tight first half but knuckled down and piled on 13 goals to three in the second half.  Ben Hart was a clear BOG for the Wellers on the back of his five-goal haul, while Josh Holding and Riley Verbi slotted three each. Jacob Gough and Kane O’Halloran were the best of the Lions and chipped in with two goals apiece.

Whitefriars continued their hot run with an eighth consecutive victory, this week defeating Oakleigh by 70 points at Whitefriars College. Five goals to one in the opening term set the scene for the Friars’ day out as they went and booted another 14 goals to six thereafter. James Connellan was unstoppable in front of goal and finished with nine in a dominant performance, while Jordan De Zilwa and Thomas Johnston were also standouts. Ethan Faragher and Jett Murphy impressed for the Krushers.