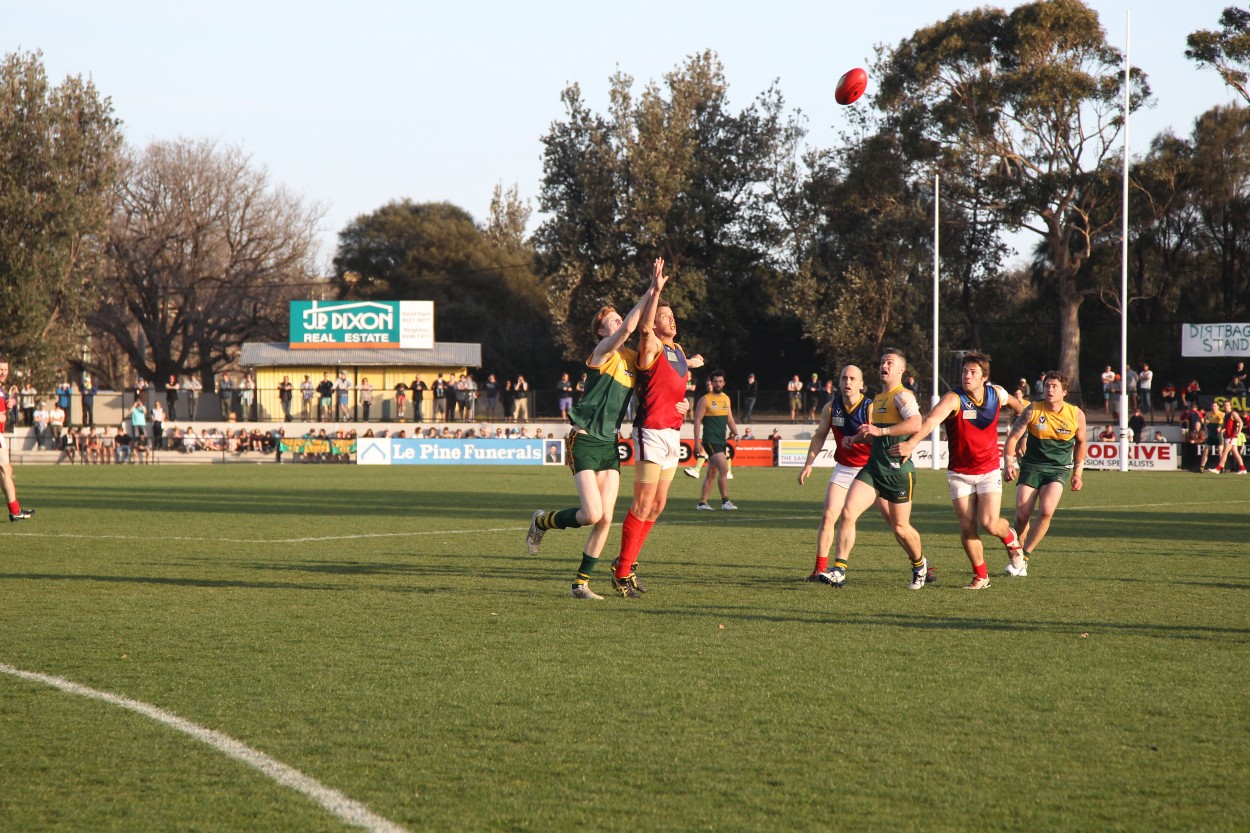 Four new teams and quite possibly a return to Premier B being one of the most competitive sections in the VAFA. Relegated are St Bedes/Mentone Tiger and Old Brighton who won this pennant in 2013. The promoted sides are Hampton Rovers and Parkdale Vultures giving this section a huge influx of sides from the South. With Fitzroy the longest road trip for almost every club, does this mean the Roys will hold a larger home ground advantage?
Opening day is set to be a beauty; Caulfield Grammarians will start the season at home to Parkdale Vultures, Old Brighton venture North to battle Fitzroy, whilst neighbours Old Melburnians and AJAX will clash on the OM’s turf.
St Kevin’s will travel to St Bedes/Mentone Tigers with these two sides having not met since 2007. Hampton Rovers will unfurl their Premiership flag at the Boss James Reserve against Mazenod with the clubs set to meet for the first time since 2012.
Round 2 has St Bedes/Mentone Tigers hosting Hampton Rovers for the first time since 2006, whilst St Kevin’s  are at home for the first time against Fitzroy. Caulfield also start with two home games, their visitors will be Old Melburnians.
The Vultures are away at AJAX whilst Mazenod get their first outing at home to Old Brighton. The Nodders and Tonners will lock horns for the first time since they were both in Premier B in 2006.
Round 3’s ANZAC Day clashes see Fitzroy hosting AJAX, Rovers hosting Old Brighton, Mazenod at home to Caulfield Grammarians, Old Melburnians hosting St Kevin’s and Parkdale Vultures will visit St Bedes/Mentone Tigers.
In assessing how a club fairs in the opening six rounds we will use finishing position from 2014 with the promoted sides to be ranked 9th and 10th respectively. An average ranking of the matches against a club’s first six opponents combined with the number of home matches will give each club a mark.
AJAX
The Jackas will be under new leadership in Marty Pask and it will be a relatively tough initiation. AJAX play both Premier B finalists from 2014, plus also the relegated St Bedes/Mentone Tigers (home). This is mixed in with teams ranked lower than AJAX and given the way the Jackas normally start a season it is a pretty good first six weeks. Average opponent ranking is 5.33, giving them a mark B.
Caulfield Grammarians
The escape artists of 2014 have a very welcoming fixture for the first six weeks. Although the fields do face the relegated Old Brighton at the Beach Oval and the promoted Hampton Rovers (away), their other fixtures provide an opportunity to get off to a great start in 2015. Three at home and three on the road. Average opponent 6.2, mark B+.
Fitzroy
As already mentioned, the Roys need to make Brunswick St a fortress as every away trip has them crossing the river. If they can do that they should be ok, but with matches against most higher ranked opposition it’s a tough start for Fitzroy. Although this is balanced by being at home four times in the first six. Average opponent 4.33, mark of C+.
Hampton Rovers
Rovers are in far better shape on this ascension to Premier B than the previous time, although they will have a tough start to the season. Rovers play both relegated Premier sides, then the Premier B preliminary finalist, St Kevins in consecutive weeks. Their Premier C Grand Final rematch with Parkdale Vultures follows. A fourth home game in the first six is against Caulfield Grammarians. Average opponent 4.83, mark of B.
Mazenod
The Nodders will be looking to out perform their horrendous start last year. Heath Black’s initiation as coach include matches against both relegated Premier sides, and a matchup against the promoted Premier C champs, Hampton Rovers. Three at home and three on the road sees the Nodders every chance to get off to a better start in 2015. Average opponent 5.33, mark of B+.
Old Brighton
Come back into this section as one of the favourites. Having won the premiership here only two seasons ago, Old Brighton were certainly competitive in Premier last season despite being relegated. Start with three away matches but each is certainly winnable. Only play St Kevin’s (home) of the Premier B finalists last year, but are away four of the first six. Average opponent 7.2, mark of A.
Old Melburnians
With the Cricket World Cup commandeering the Junction Oval for their pre-season, OM’s should be well prepared for when they have to travel. Three games at home and three on the road all to sides they have had success at in the past couple of years should provide a good platform for 2015. Average opponent 5.83, mark of B+.
Parkdale Vultures
Much like Rovers who they jump with, the Vultures are in superior shape compared to their last one season sojourn in Premier B. The Vultures young squad will soon know how far they have come as they face both relegated Premier sides and have a re-match with Rovers in their first six. Split their games home and away. Average opponent 4.5, mark C+.
St Bedes/Mentone Tigers
Tigers faithful were tested at times during the year, but this proud club is keen to respond with actions on the field. For so long accustomed to weekly trips North, St Bedes/Mentone can look forward to plenty of local travel this year. They play both promoted Prem C sides, but face the challenge of both Premier B finalists. Average opponent 6.2, mark of B+.
St Kevins
The pain of recent finals campaigns should be wiped clear by the time SKOBs round one opener against St Bedes/Mentone rolls around. This should give a good indication on where both sides are, but surely 2015 is the year of the SKOB? Matches against both relegated sides, plus finalist OM’s, SKOB will be tested early but the chance to make a statement should have them up for the early rounds of 2015. Average opponent 4.66, mark of B.
The 2015 Premier B fixture will be released on vafa.com.au on Thursday 4 December.