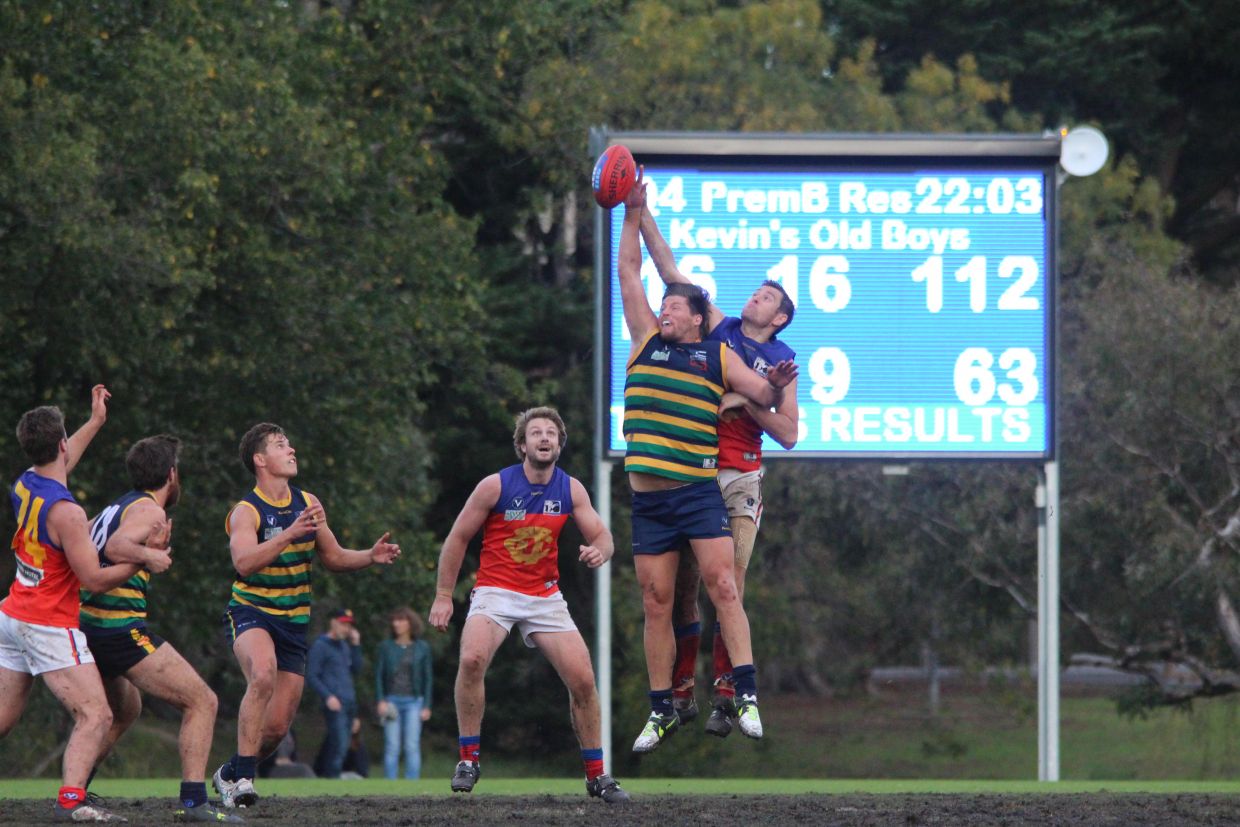 Premier B: SKOB rise and rise again as the dismantle Tigers

Round 11 saw some old-fashioned beltings handed out in Premier B, as three of the four top sides flexed their muscles. Now that we are entering the latter half of the season, teams are starting to play each other a second time around, and it is always fascinating to watch to see if the result will be any different. So far, out of ten rematches, eight have been won by the same team twice.

Mazenod and Hampton faced off at Central Reserve, having both lost their last three games. The Nodders were looking to avoid a repeat of their previous meeting, which was a 69-point victory to the Rovers in Round 1. Mazenod went into the game missing two of their regular goalkickers Jarrod Dalton and Jeremy Devlin. The Rovers got off to a dream start, posting their highest first-quarter score of the season and setting up a seven-goal lead. The Rovers debuted four players and got good value from Harry Hill (two goals) and Christian Carnovale was also among the best. Unfortunately for the Rovers, they were unable to follow up their big first quarter. They only managed one goal in each of the next three quarters and the Nodders slowly chipped away at the deficit but could not quite bridge the gap, leaving them in ninth position, one game clear of Caulfield. Ben Phibbs (three goals) and Josh Cowan again stood up for the Nodders.

I’d imagine the folks at Brunswick Street would have been in good spirits during the week after the Roys fantastic, yet unsuccessful, effort against Premier B leaders St Kevins in Round 10. Having said that, they would have been keen to back it up when they travelled to take on AJAX, who have had an inconsistent month and are proving hard to tip. The Roys fell three points short of the Jackas when they met in Round 3. Geoff Measey and Richie Simon, both of whom had good fortnights, were out of the Jackas team but they had a couple of handy “ins” in Adam Caplan and Jake Lew. Lew ran riot against the Roys on this day and kicked six goals. Fitzroy struggled to find an avenue to goal, and failed to kick a goal in the first half while the Jackas kicked nine, to lead 57-3 at the main break. The Roys narrowly won the second half but finished on the wrong end of an eight-goal result, which would have been disappointing as it stopped the momentum they had been building up over the last month. David Fayman and Alex Wollan were influential again for the Jackas, and the win moves them up to sixth.

Old Melburnians had won two in a row coming into Round 11 and looked to continue their winning form at home against Parkdale, no doubt keen to atone for their Round 4 match, which saw the Vultures triumph by two goals. The game looked like being a shootout, as the two teams went to quarter time having kicked 11 goals between them. The rest of the game belonged to the OMs, thanks largely to a season high eight goals in the second quarter. They added ten goals to four in the second half to run out with an 87-point victory and outright second on the ladder. Gus Borthwick (3), Tom Hywood (2), Josh Freezer (1) all returned for the Redlegs and made an impact, while Tim Taranto and Nathan Peterson contributed four goals for the Vultures in their first games for the season.

St Kevins hosted their nearest challenger St Bedes/Mentone in a top-of-the-table clash, the return fixture of the Round 1 game where SKOB claimed an exciting four point victory. The ladder leaders opened up a small advantage at quarter time, and unleashed an eight-goal blast in the second quarter to hold a six-goal halftime lead. The Tigers won the third quarter but were still a long way back at the last change. Unfortunately for the Tigers the SKOBs did what they have done so often this season and found an extra gear in the final term, kicking nine goals to one to claim a 92–point victory. The SKOBs again had multiple contributors with twelve individual goalkickers. There were also several handy inclusions, with Steven Salopek returning to be best-on-ground and big man Gerard Gleeson kicking three goals. Pat Tyquin and Tim Doherty (three goals) were again among the Tigers best.

Making light of their injury list, Old Brighton Grammarians dined out on a similarly undermanned Caulfield Grammarians and claimed a mammoth eighteen-goal victory in their Round 11 clash at Glenhuntly. After piling on eight goals in a highly impressive second quarter, the Tonners produced a withering ten goal assassination in the third term. It was a SKOB-esque performance, with fourteen players finding the score sheet. The first quarter was a competitive affair, with the home side grabbing the early lead after Michael Dewar kicked the first goal of the match. From that point however, the Fields simply couldn’t match the Tonners’ speed and efficient ball use. The defence won first use of the ball with timely interceptions and better judgement. Tim Fogarty again quietly locking down his opponent, while Dylan Verney and Riley Cummin stayed involved, linking up as though programmed to know each other’s every move. The second quarter launched the onslaught from the moment Stewy Hooy brilliantly burst from a pack to thump through the first goal. Although held early, Charlie King nailed a couple as did young Michael Slater, and Ben Jakobi cleverly snapped a goal that sent us to the sheds with a 49 point advantage. After halftime, three times Ollie Cavallaro charged forward, marked strongly and drove the ball through, his opponents unable to cope with his brute strength. Nick Coroneous dobbed his third from a tight angle, and kicked four for the day in his first match in 2015. All of a sudden the Tonners had kicked ten straight goals before a minor score. A hapless home side returned from their oranges to face the music again and finally the Tonners missed a few, but still ran away with a 108-point victory heading into the double-bye. Caulfield were missing in-form contributors Dominic O’Keefe and James Shanahan, and were well served by William Barker (three goals), Tim Nixon and Hugo Gates.