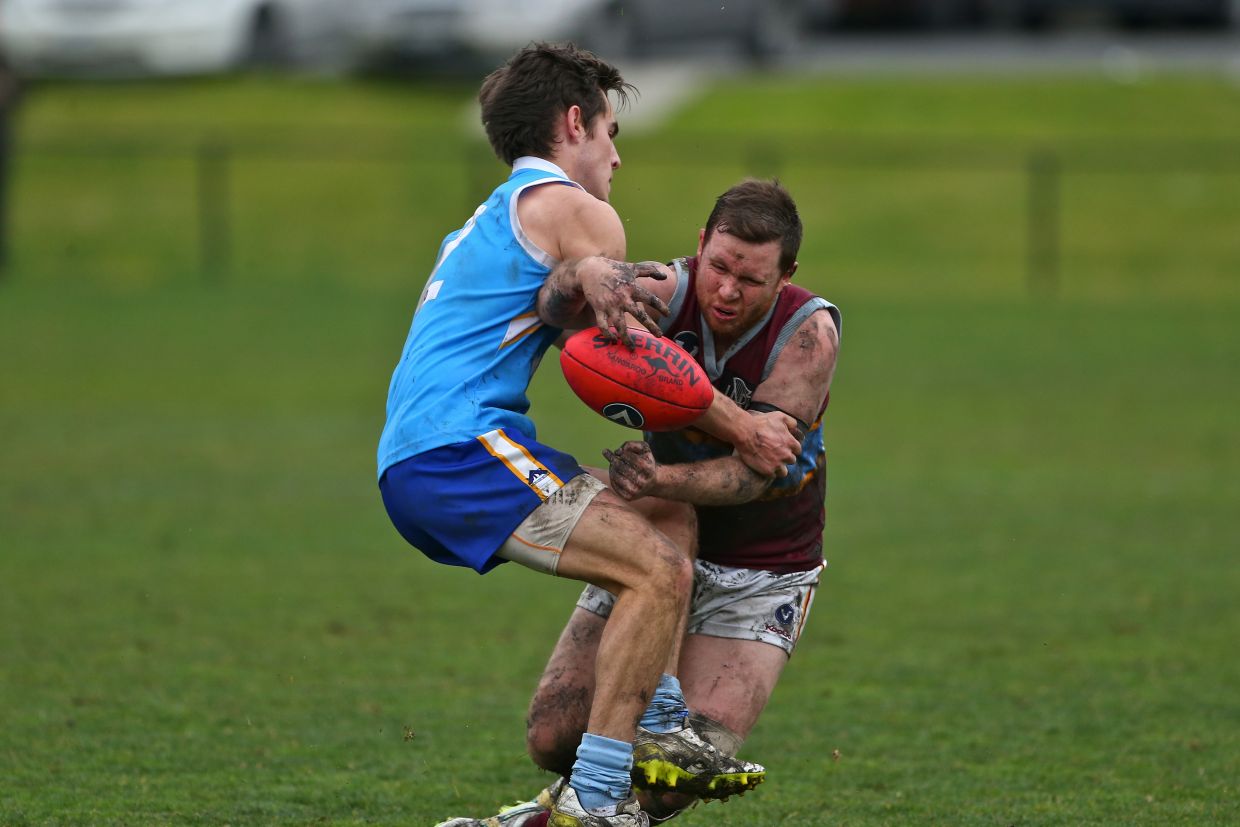 Marcellin came out on top of the battle between them and second placed Monash Blues at Frearson Oval to move one game clear of their fellow finals rivals. A second half rampage from the Eagles turned the tide and gave Marcellin breathing room in top spot, whilst Monash sit even with Old Ivanhoe on 12 wins. The Hoes kept their chances alive to claim second with a win over Peninsula at home. Elsewhere, Old Haileyburians slipped up again, this time against Therry Penola, and now have a real task ahead of them to hold onto fourth. Old Camberwell moved out of the relegation zone and got the points against Williamstown CYMS on the road in a high scoring affair. And Oakleigh did it comfortably against PEGS at W.A Scammell Reserve.

After an even first quarter Monash Blues jumped Marcellin in the second term, booting four goals to one to take an 18-point buffer at the major break. But Monash’s offence completely died off after halftime with no more goals kicked by the Blues. Marcellin put six unanswered majors past Monash in the second half to run away with a season defining 22-point win. Nicholas Petering’s three first half goals weren’t enough for Monash to hold on, while Andrew Kay led Marcellin’s tally with two. Ashley Viney was best on ground in the victory for his effort and also contributed a goal.

Peninsula came out firing against Old Ivanhoe with a point to prove in the race for a finals berth with three quick goals in the opening quarter. The Hoes answered the call and still managed to take out the term with five goals to four. The scoring dried up in the second as a result of Ivanhoe unable to take its chances as the Pirates closed the deficit to one goal. The Hoes got a much-needed gap by three quarter time of 22-points. But Peninsula didn’t drop off going into the last as they outscored Old Ivanhoe. It wasn’t enough however as Ivanhoe held off the fanatic Pirates by 13-points. Ollie Parks was B.O.G for Old Ivanhoe as a great marking target up forward.

Therry Penola continue to scrap in what formerly appeared to be a fruitless attempt to remain in Premier C next year, and at the same time hurt Old Haileyburians’ finals aspirations. The two fought out a tight three quarters with no one able to take the ascendancy with confidence. The Bloods led by five at the final change but a spark from the Lions in the fourth quarter pushed the game in their favour. Two quick goals from Matt Costello to start the fourth quarter gave Therry the lead, while a goalless term for Haileybury ended their day. The inclusion of Jarrod Bannister proved pivotal with his five goals being the difference in the 23-point win.

In a high scoring meeting between Williamstown CYMS and Old Camberwell, accuracy proved key. The Wellers’ had one more scoring shot than the CY’s but ran away with a 21-point win. Williamstown looked like they could’ve ended the game in the first quarter, with eight goals to start the game. Old Camberwell reeled in the deficit at half time but it wasn’t until the last quarter that the Wellers managed to take the lead. In a shootout between forwards, Old Camberwell’s James Howells came out on top against CY’s known goal scorer Nicholas Ebinger. Howells finished with nine goals and won the game for Old Camberwell off the back of his performance.

Oakleigh’s last minute effort to play finals remains a mathematical possibility having knocked off PEGS at home. It will require some luck as external results have to fall their way but with a better percentage than fourth placed Old Haileyburians, it is possible. Trevor Bromley led the charge at home and bagged seven goals against the Bombers as the Krushers made light work of PEGS. Aaron Cloke was also strong in attack with five majors whilst Jack Davidson was named best afield in the 59-point victory.

This week, rivals Marcellin and Old Ivanhoe do battle, and if the Hoes are to prove a real finals contender they have to win, although I expect the Eagles to hold onto the points at home. Old Camberwell host Therry Penola, both coming off promising victories and both 4-11, with one bound for relegation. I’m tipping Old Camberwell to jump to safety with the win. Monash Blues travel to Peninsula where I expect the Blues will rebound and take the chocolates. Old Haileyburians play off against Oakleigh and the Bloods will break their three game losing streak and knock off the Krushers. PEGS play home to Williamstown CYMS and the CYs should bring home to victory here.