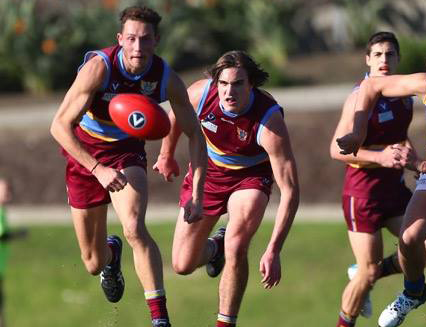 Marcellin maintained its one game advantage at the top of Premier C over second running Monash Blues with a crushing 54-point win over Old Ivanhoe. The Eagles wasted no time taking the ascendancy and then booted past the Hoes in the fourth quarter. Elsewhere, Monash Blues bounced back after last weeks defeat, coming back after halftime to edge away from Peninsula. Old Haileyburians returned to the winners list by defeating Oakleigh at home following three consecutive defeats. Williamstown CYMS outgunned PEGS in the second half in a come from behind victory. And Old Camberwell bested Therry Penola despite the Lions having more scoring shots.

Marcellin took a five goal to three lead in the first quarter, and held control for the games entirety. Their dominance grew throughout the opening three quarters until the Eagles put their foot down in the last. Another seven goals in Marcellin’s favour ended the contest as they achieved another percentage boosting victory. Jonathan Bortolotto did the damage for Marcellin and proved the difference with seven goals while Jeremiah Antypas and Daniel McMahon contributed with four and three respectively. Ashley Viney continued his stellar month with another best on ground performance and also added a major.

A rampant Peninsula needed victory to have any hope of playing finals this season and tested Monash Blues before falling just short. Peninsula got the slight edge in the first quarter taking a two-point lead and made it eight at the major break. Monash were made to put in a fourquarter effort by Peninsula, lifting again in the second half. The Blues held the Pirates goalless in the third quarter along with kicking three goals of their own to take a 12-point advantage going into the fourth. Another four goals in the last handed Monash the 17-point win with Nicholas Petering top scoring with three.

Old Haileyburians have struggled in the last three weeks but regained some much-needed form against Oakleigh as they head into the finals. The Bloods wasted no time with a six goal to one advantage at home. The Krushers reduced the deficit to 11-points at the half but Haileybury once again extended the margin in the third term. Oakleigh couldn’t reel in the score line in the last as Old Haileybury held onto a 42-point win. Bloods youngsters Corey Connelly (4) and Aaron Toy (3) led the scoring whilst Lachlan Treverton was their best.

Therry Penola’s accuracy at goal may have just cost them a spot in Premier C in 2016 as Old Camberwell defeated the Lions to move one game clear in eighth. Therry had a one-point lead after an even first quarter, but tripped over themselves in the second, kicking seven points while Old Camberwell booted six goals straight. The Lions played catch up from here and slowly made progress. Therry had a real opportunity in the last as they closed within six points but the Wellers held strong to win by nine-points. Dale Angus’ five goals weren’t enough to get Therry Penola the four points – James Howells top scored for Old Camberwell with four. Fraser Wells was proclaimed best afield for his efforts and goal.

Williamstown CYMS were made to earn it by PEGS but came out on top at the final siren. The Bombers took the lead at the first change and carried a 14-point advantage into half time. The CY’s owned play in the third quarter kicking 4.8 to gain the lead but couldn’t fully make the most of numerous opportunities. PEGS didn’t give in in the fourth quarter but in the end their effort proved to be fruitless as Williamstown went on to win by 17-points. Nathan Bratby kicked three goals for the CY’s in only his second senior game of the season. Jake MacKenzie was named the best in the victory.

This week Old Ivanhoe host Old Camberwell, the Hoes can still chase second spot and a win here will help their cause. Therry Penola plays Peninsula and I expect the Pirates to come out victorious despite a rallying Therry attempting to avoid relegation. Top plays bottom as PEGS travel to Marcellin and ladder positions will reign supreme here. Old Haileyburians will take on Monash Blues at home. I simply can’t see how the Bloods can outscore the Blues. Oakleigh faces Williamstown CYMS and I’m predicting the Krushers to hold onto the points at W.A. Scammell Reserve.