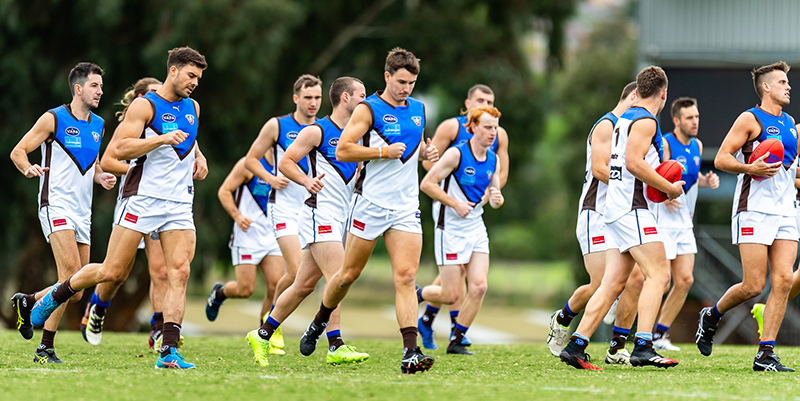 This recent outbreak may have taken Round 8 from us, however, with any luck, there is plenty to be enthused about looking to a massive Round 9 in Premier C.

First, we have Mazenod hosting Old Mentonians at Central Reserve. Sitting at 4-3, the Nodders have been the form side. After sustaining some tough losses at the hands of Old Ivanhoe and Monash, Mazenod has ridden the great form of star midfielder Samuel Michael to three straight wins with an average winning margin of 72! This form has been bolstered by the great play of the backline headlined by the return of Tom Warby. Up front, the Nodders have been hard to stop as goals come from multiple stars in Mitchel D’Angelo, Matthew Fewings and Nick Pascuzzi (37 goals combined). However, the lack of a key forward may hurt them when they face Old Mentone. The Panthers sitting at 3-4 have been anything but predictable. Big losses to Ormond and Monash early had some pundits worried, but comfortable wins against UHS-VU, Preston and the scalp of the year against Hampton have shown Old Mentone has the potential to beat anyone on their day. Jack of all trades Darcy Brown has been prolific all year and Josh Gorman has been just as impressive. The defence has been the Panthers’ strong point with Lewis Oliver and Comrey Edgeworth holding down the fort. This game will be close; however, I expect the Nodders in-from defence to hold the Panthers’ lack of scoring options to make it 4 on the trot.

Our match of the round comes out of Como Park where Old Geelong will host Hampton Rovers. Old Geelong started the year red-hot, winning their first four, but hardly in convincing fashion. The Oggers status as a contender has been shaken in recent weeks after their 49-point loss to Monash and 93-point loss to Ormond. This week is their week to show the competition the Oggers are the real deal. This week will be a battle of the elite midfields and Old Geelong will always be confident when they have Scott Dixon, John Simson and William Sloss at their disposal. Their issues have been up forward, and with Christian Hatzis back in the line-up the Oggers are even more confident. The Rovers on the other hand will back their midfield to the hills. Massive wins against Old Ivanhoe and Ormond and being the only team to get within a kick of Monash, Hampton were early season contenders. However, surprising losses to both Old Mentone and Mazenod have some questioning their current form. Chris Perkins has been dominant on the wing this year, while Christian Carnovale (13 goals) and Nathan Smith (20 goals) have proved impossible to stop in the midfield as they have continued to be options when they move forward. Youngster Max Coughlin has further cemented why the Rovers are the best offensive team in the comp kicking 17 to date. A loss can put the Rovers out of the four and a loss for the Oggers will feed the narrative that they can’t beat a top-four team. After a few down rounds, expect Hampton to get on top in the contested ball and win in a tight one.

Ormond will host the in-form UHS-VU at E.E. Gunn this week. The Monders got off to a red-hot start this year, but a round four loss to Hampton at home was a worrying sign for the pre-season favourites. These worries were put to bed after a 93-point win against Old Geelong in Round 6. A tough loss in Round 7 to Monash will not deter Ormond as they look to flex their muscles this week. With the second-best defence in the competition, Dae Szydlik, Jeremy Simon and Matthew Suckling have ensured the Monders rarely let any through. Max Kennedy, Tom Buckley and Jack McCartney have ensured the Ormond forwards get plenty of looks, however, with Cathcart and Tolongs out, scoring will be their major worry going forward. UHS-VU had a rough introduction back into the Premier sections, sustaining six straight losses before mounting their first win against Preston in Round 7. Their quest for four straight promotions looks to be a tough one, but recent form would say the Vultures may be here to stay. Ben Dimattina has been solid all year for a Vultures defence constantly under pressure, and midfielder Esubalew Ramsay has found some great form in recent weeks. Their issue, however, will be scoring against this elite Monders defence. For that reason, Ormond should walk out comfortable winners at home.

In what is set to be another great match-up, Monash will host Old Ivanhoe at Frearson Reserve. The Blues are undefeated and rolling through opponents at the moment. Wins against all top four teams have proven any doubters wrong. With the best defence in the league, Jake Meade, Daniel Easson and Charles Cosgriff have been beyond influential. However, it is the midfield where Monash beat you. MacGregor Cameron has been as dominant as you can be this year out of the ruck, and Beau Harris, Nick Argento and Billy Robertson have been the beneficiaries as they are all in career best form. Having big Mitch King (15 goals) up forward also helps the case. Their opponent Old Ivanhoe has been much more inconsistent this year. After just missing out on a preliminary final in 2019, the Hoers looked poised to do some damage, however, they have yet to beat a top four team in 2021. Key defender Nick Vacirca has been incredible this year, while Jake Bradley has done more than hold his own in the midfield. Big man Luke Velluto and goal sneak Richard Skok got off to a great start this year but have had troubles hitting the scoreboard in recent weeks. This game will be decided in the middle. Bradley v Harris is a match-up to watch, and if big Alex Mirkov plays Mac Cameron will have his biggest test in front of him. All in all, the Hoers’ lack of scoring options in recent weeks is too much of a worry against this Monash defence and I expect the Blues to get up in a close one.

Our final game sees Preston host Marcellin in a must win game for both sides. Preston has found their time in the Premier sections difficult, as they have yet to register a win in 2021. However, they have been in three of their recent losses and have been marred by inaccurate kicking of late. Jackson Curic (15 goals) has been a revelation up forward for the Bullants, while key back Paul Sansonetti has also been great. They will need more out of the Calcedo boys if the Bullants are going to avoid relegation this year, and it all starts this week. Marcellin has been the surprise of Premier C. Week after week, the Eagles have not been able to put games away as they have been competitive in all of their five losses. Losing by only 10 to Monash, five to Old Ivanhoe and four to Mazenod, Marcellin might be the best team in the entire VAFA to be eighth after seven rounds. The Eagles’ mids have made the opposition worry every week, as Antypas, Howe and Perry have been as clean as you can be. Issac Nolan (16 goals) has also been a welcomed surprise up forward. Marcellin score, and defend well, they just need to start putting wins on the board. I expect they will get their third win this week.