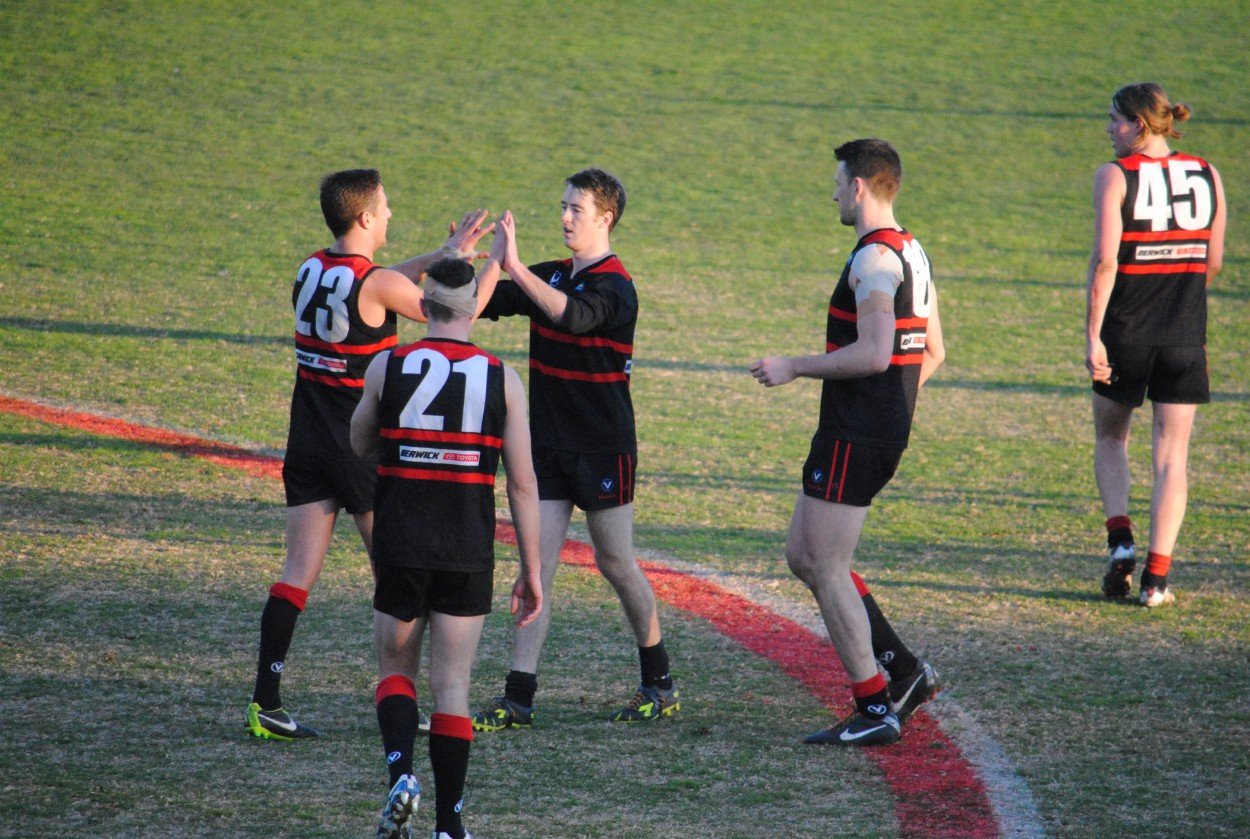 It brilliant winter conditions for football Round 11 was played out across Melbourne.
In Premier there were matches of great consequence all over, however it was St Bernard’s one point win over Collegians that raised the most eyebrows. The Bernies win keeps them out of the relegation places but the subsequent loss to Collegians and Beaumaris has both sides just a game from safety.
St Bernard’s led for most of the day, were caught by Collegians but then found something that allowed them to hold on by the barest margin.
University Blues decamped their home ground to Princes Park Oval 1, the move wasn’t enough to put the Blues off their game as they kicked away to defeat Old Carey by 36 points. The Panthers led at three quarter time by five points but the Blues led by 7 goals from Fergus Watts were able to kick away and secure a vital win, simultaneously all but consigning Old Carey to be relegated. The Panthers are now three games from safety.
Old Xaverians put on a powerful display against Old Scotch as the two sides returned to school days with the match held at Xavier College. The Xavs forward line were unstoppable as Brendan Goss (8 goals), Matt Handley (5 goals) and Pat Ambrose and Lachlan Smith (3 goals) kicked the home team to an 83 point win.
St Bedes/Mentone Tigers continue to build a case that they will be a team to consider in September after they beat top side Uni Blacks by 19 points at Brindisi St.
De La Salle were too good from start to finish against Beaumaris, also winning by 83 points at Dairy Bell.
In Premier B, top of the table Old Trinity held on to win another close game against AJAX at Daley Oval. The T’s winning by 9 points.
At Brunswick St Oval, Fitzroy tightened up the bottom end of the Premier B ladder defeating Caulfield Gr. by 14 points. Both sides now have three wins each.
Old Melburnians won by a comfortable 49 points at home to Werribee Districts.
Travis Ridgeway kicked 8 goals for Old Haileyburians as the Bloods hung on to defeat Parkdale Vultures by 19 points at Parkdale.
St Kevin’s returned to form with a thumping win over the powerful Old Brighton by 51 points at home. White (5 goals) and Edgar (4) were the big contributors to the win for the SKOBs.
In Premier C, Banyule led ladder leaders Mazenod at half time, but a 10 goal to 2 second half had the Nodders comfortably home by 30 points.
Peninsula had a much needed win against NOBs-St Pats by 59 points. The win for the Pirates should give them enough confidence that they can go on to secure another year in Premier C. NOBs-St Pat’s need to conjure something special to get out of their predicament.
In the upset of the round, Oakleigh has beaten Monash Blues in an absolute boil-over. Until two weeks ago Blues were undefeated in 2013, the Krushers inflicting consecutive losses on the Blues, winning by 43 points. Bromley kicked five for the victorious Oakleigh.
Old Ivanhoe crushed Old Camberwell by 106 points. Adrian del Monte kicked 6 goals, Nick Butler 5 goals as the Hoers piled on the misery for the Wellers.