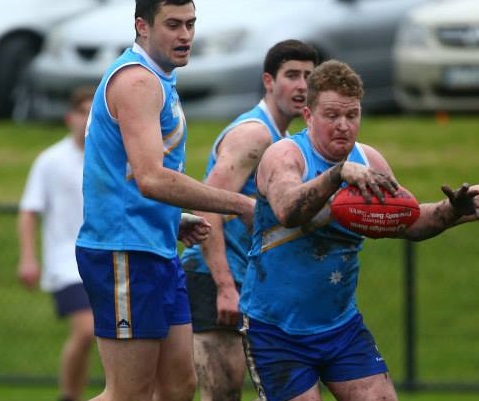 Premiership quarter? Nobody told Premier B.

The saying goes that the third quarter is the ‘premiership quarter’, but in Round 8 it was the final term that proved crucial. The margin in all five Premier B games was under four goals at three quarter time and four out of five games ended up being decided by 30 points or more. In the close one, Old Brighton came from behind against Parkdale and hit the front, only to see the Vultures snatch the lead back late and hold on for a one goal win.

St Bede’s/Mentone were looking to consolidate their top four position and stay in contention with the top two when they took on the Hampton Rovers. The Rovers were going for two in a row after defeating the Bloods for their first win of the season. The Tigers squandered opportunities in the first quarter and went into quarter time with scores level after kicking 1.7. They kicked straighter in the second but Hampton had the edge, taking a narrow lead at half time. The Tigers regained the ascendancy and held a 16 point lead going into the last quarter. Robert Iudica got the Tigers off to a great start, finishing off an impressive end-to-end play involving Barnes, Robertson, Mirams and Denton. James Tyquin added another goal soon after and ten minutes into the quarter the margin was out to five goals. The Rovers hit back through the middle stages with goals to Ed Turner and Trent Dennis-Lane, but the Tigers finished with two goals in three minutes to Tyquin and Patrick Hurst to come away with a comfortable victory. They are now equal second with Old Scotch and two games clear of Parkdale in fourth place, while Hampton remains anchored to the bottom of the ladder with their solitary victory.

After ordinary starts to the season, both Fitzroy and Monash have bounced back over the past few weeks. Since losing the first four games, the Roys have now posted three wins, as well as a draw against league leaders Beaumaris. Before their Round 8 clash, Monash had won three out of four and were looking to continue their climb against the Roys. Tom Cheshire got the home side off to a great start, kicking both their first-quarter goals. Four more goals in the second quarter gave Fitzroy a handy lead at half time. The Blues needed something special to get back in the game. Keegan Mason got them on the board first with a contested mark in the goal square. Daniel Bisetto replied with the Roys only goal for the quarter, but then the Blues kicked three in three minutes close to three-quarter time thanks to Nick Petering and Maddison Hardiman. The margin at the final change was just 11 points and Andrew Hickey kicked the first goal for the Blues when play resumed, bringing the game to life. However, from there it was all the Roys, kicking six goals in 20 minutes. The home side had several contributors in the final term, including Max Davie, Aidan Lambert, Bisetto, Lachlan Henderson and two goals from Emile Pavlich. The win lifts Fitzroy to sixth on the ladder while Monash falls to eighth.

Old Brighton travelled to the Vultures Nest hoping to build on their impressive performance against the in-form Cardinals the previous week, while Parkdale were looking to bounce back from their one point defeat at the hands of the Tigers. The Tonners first-quarter inaccuracy cost them the lead at quarter time, but recovered to hold a narrow lead at the main break. The Vultures regained the lead with five goals to two in the third, but with the Tonners having the wind at their backs it was well and truly game on. Dan Anthony started the Tonners off with a set shot and then Jack Rutter and Mitchell Vandenberg combined for another one less than a minute later. Michael Karayannis joined the action and when Anthony took a contested mark in the goal square and kicked truly, the Tonners had four goals in ten minutes and all the momentum. However, the Vultures weren’t done, replying with three goals of their own through Nathan Papatsanis, Nathan Peterson and Josh Manning. They also managed to scramble a behind in the final minutes to make the margin seven points. Anthony had a set shot in the last minute but was unable to convert, giving the Vultures a six point win. The win lifts the Vultures to fourth, while Old Brighton remains ninth.

I went along to the much-anticipated top of the ladder clash between Old Scotch and Beaumaris. It was a typical Melbourne ‘four-seasons-in-a-couple-of-hours’ day at Camberwell Sports Ground. Both teams used the wind effectively in the first half, and the Sharks held a one-point lead at the main break. Max Van den Broek, Lachlan Byrne-Jones and James Sansom all kicked two for the Cardinals, while Stephen Milne was the main contributor for Beaumaris, with four goals. The wind seemed to die down considerably by the time the third quarter started and Beaumaris took advantage of this. Lachlan Boyd got the Sharks off to a perfect start and Milne kicked another one. The rest of the quarter was goal-for-goal and Beaumaris maintained their slight lead at three-quarter time. The goal kicking was extremely accurate considering the wind factor, and after Robert Cathcart missed a couple, both teams combined for eight straight goals from eight different goal kickers to finish the quarter. For Old Scotch, Andrew Jelbart, Tim Macmillan, Sansom and Byrne-Jones got on the board, while for Beaumaris it was Josh Ward, Scott Braithwaite, Daniel Gribbin and Milne. The last quarter was a “Shark Attack” as Beaumaris blew the contest away with four quick goals from Boyd, Gribbin, Milne and Matt Lovejoy in quick time to start the quarter. Old Scotch managed a solitary behind and Milne and Jack Grange finished off with late goals, as the Sharks took a 51-point win and skipped one and a half games clear on top. Old Scotch remain second on percentage, just ahead of St Bede’s/Mentone.

Ajax ended a three-game losing streak with a five goal victory over Old Haileybury. The win was set up with a six goal to three second quarter, and they maintained their lead in a low scoring second half. Andrew Thurin and Ash Burstin both kicked three goals for the Jackas, while Brad Caplan continued his excellent form and has been among the best players in seven out of eight games so far this season. The Bloods have hit a rough patch, having now lost four in a row. They made six changes to the side beaten by the Hampton Rovers and were well served by Jordan Moncrieff (two goals, best on) and Alex Spencer (one goal) in their first games for the season.