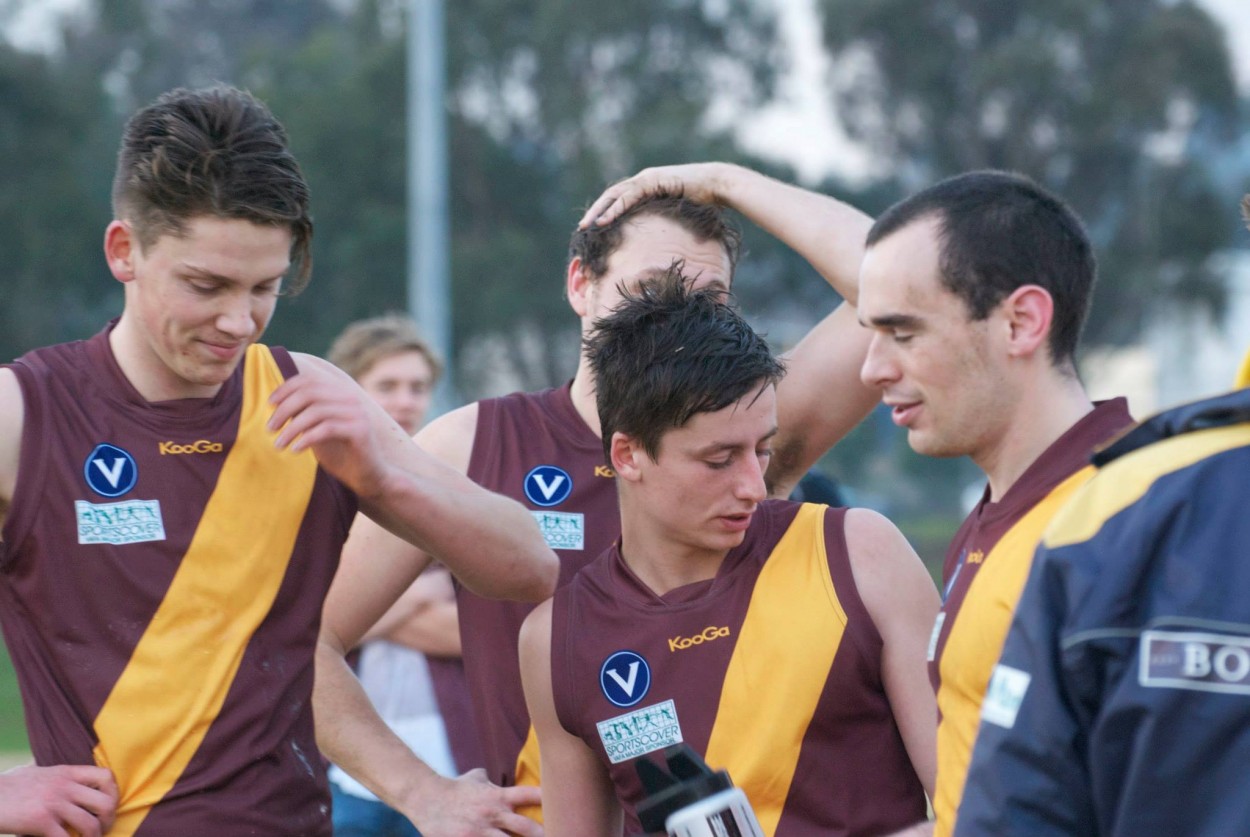 The Division 1 relegation battle heated up with MHSOBs scoring a brilliant away win at Bulleen Templestowe. The Unicorns 21 points better than the Bullants and the win now sees them just a game (and percentage) behind Old Mentonians and Old Geelong.
Old Geelong had a vital home win over second placed Williamstown CYMS (Vanderloo 5 goals). The OGs saluting by 20 points at Como Park and the win keeps them in 8th spot, a game clear of MHSOB.
Ormond and Whitefriars played a belter of a contest at the College in Donvale, with the Monders getting the points courtesy of their one goal win. The win moved Ormond to second and importantly opened the door for fourth spot, the Friars holding on to fourth by percentage.
Chasing hard for fourth is Prahran Assumption who claimed a 97 point away win over Glen Eira.
Turner’s 8 goals helped steer Hampton Rovers back onto the winners list with a 76 point win over Old Mentonians.
Division 2 had a couple of absolute crackers, starting with Old Paradians who managed a goal after the siren to win by a point at at St Johns to move to 6th spot. The loss to St John’s all but ends their bid for finals.
It was another one point thriller as Ivanhoe got over the line against Emmaus St Leos (Beluszar 6 goals). The Animals falling agonisingly short of their maiden win for 2013. Importantly Ivanhoe record a win that keeps them a game clear of the drop zone.
St Mary’s Salesian shocked everyone with the extent of their demolition of South Melbourne Districts. The Saints were victors by 146 points, Gusts had five goals to his name for the Saints who had 12 individual goalkickers.
Jarryd Bannister kicked 8 and Corey 5 goals as Therry Penola crushed Old Eltham Collegians by 78 points. The Lions are three games clear in top spot. Old Eltham’s percentage  took a battering and they are now 4th.
Yarra Valley ran out 39 point winners over Monash Gryphons. The loss for the Gryphons sees them a game from safety.
Division 3 is as wide open as any section after St Francis Xavier drew with Kew. The draw didn’t have any bearing on the ladder positions as SFX stay 4th and Kew stay top but showed the depth of the section and the fact that in a final 6 you can win the premiership from anywhere.
Albert Park had a solid 59 point win over South Mornington. The Falcons still a chance of playing finals, whilst South Mornington need to win all remaining games and hope results go their way to avoid an immediate return to Division 4.
Swinburne University scored an upset win over Aquinas by four points. Aquinas stay 6th, hanging on to their finals spot on percentage from La Trobe Uni.
La Trobe couldn’t take advantage of Aquinas’ slip up though as they fell to Elsternwick (Thornton 6 goals) by 41 points.
Old Westbourne’s miserable season continued at the hands of UHS-VU to the tune of 109 points.
Richmond Central (Demeo 8 goals) were too good for Power House to record the win by 35 points.
Division 4 saw Northern Blues dismantle Chadstone by 147 points. McRedmond kicked a lazy 10 goals and Scott 6 goals in the rout that sees the Blues confirm 5th place.
Falling one point short of that margin and title of the biggest win in the section were Hawthorn who took Mt Lilydale to the sword. The Hawks (Rossoukas 6 goals) won by 146 points.
North Brunswick moved into the six as they recorded a thrilling 4 point win over Point Cook.
Whilst Eley Park Sharks and West Brunswick played out another thriller, the Sharks home by 5 points.
Box Hill North defeated Manningham Cobras by 35 points whilst the Dragons had the bye.