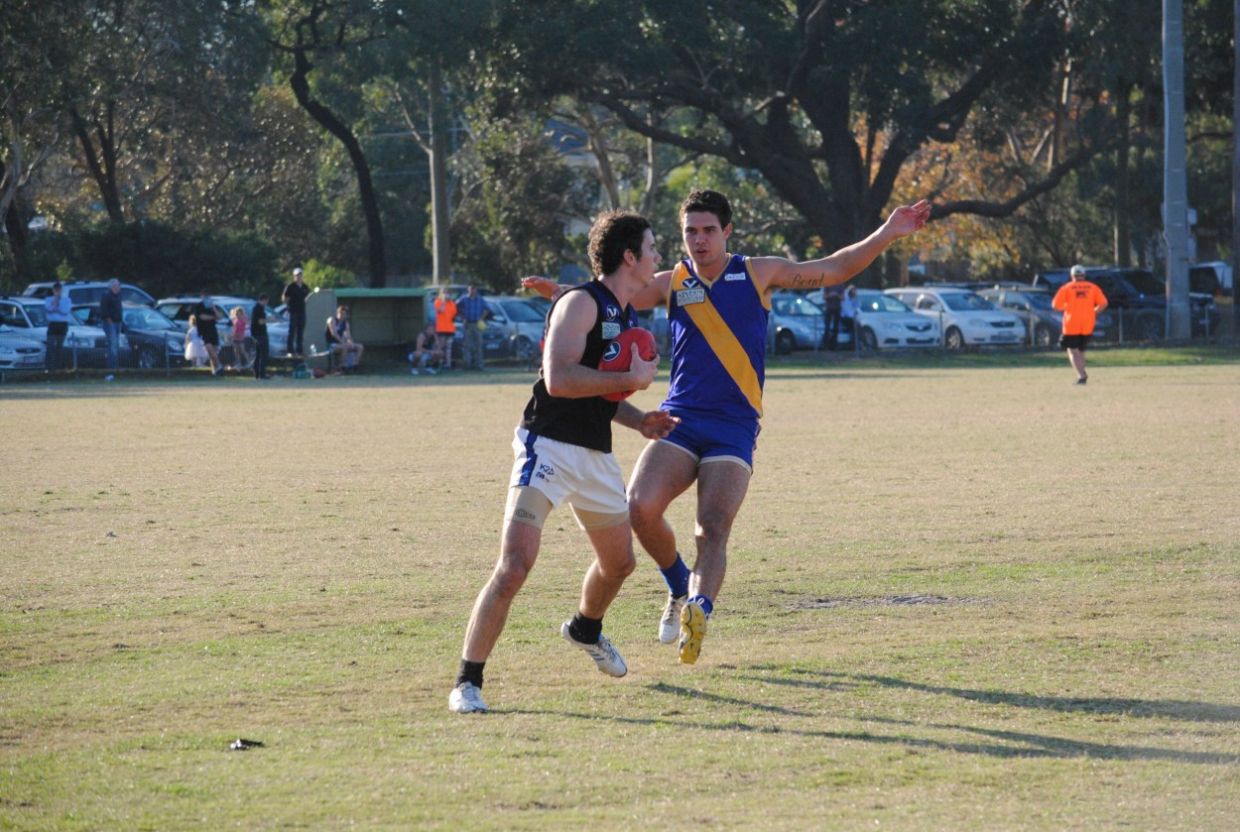 De La Salle continued their winning start to the season holding off a regrouped and more consistent Old Scotch (2 wins-3 losses). The Cardinals led in the early exchanges  but De La  (5-0) showed their class to win by 8 points, Pickett kicked – you guessed it – four goals in the win. Old Xavs should have put the game to bed earlier but the Uni Blues (2-3) are a better side this year than last and they almost pinched a memorable win.They didn’t though as Old Xavs (3-2) regained the lead almost with the last kick of the match to win by 3 points at University Oval, Brendan Goss adding another six goals to his season tally, Nick Smith doing likewise for Blues.

St Bedes/Mentone Tigers provided the upset of the day with a memorable 7 point win over Collegians. The Tigers’ win leaves both they and the Lions at 2-3 after five. St Bernard’s join a bunch of teams on two wins after securing a big 63 point win over Old Carey who have failed to fire a shot in 2013. Shaun Clarke booted six goals for the Bernard’s with Old Carey left to lick their wounds with a winless start from five.
In the Premier B Grand Final rematch between Beaumaris and Uni Blacks, it was the Blacks who reminded the Sharks that they were the superior of the two teams to ascend to Premier with a comfortable six goal win.
If Premier had a few close ones (3 games decided by under 10 points) then Premier B had the blowouts. St Kevin’s (3-2) bounced back to the winners circle dismantling Fitzroy (0-5) at Brunswick St by 70 points.  Henry Parkes kicked five of the SKOBs 15 goals. At half time at Princes Park, AJAX lead Old Haileybury by 61 points. Although kept goalless in the final term, AJAX (4-1) still prevailed over the Bloods by 38 points. David Fayman the star of the day slotting 11 majors for the Jackas.

Old Melburnans (3-2) inflicted back-to-back losses to Old Brighton (3-2) prevailing by 16 points at the Junction Oval. Old Trinity (5-0) kept their dominant season rolling with an 11 goal win over visiting Parkdale Vultures. Caulfield Grammarians (2-3) had another win when they collected the four points over a disappointing Werribee (0-5) by 91 points.  The Fields were served well by Declan Reilly and Will Edwards who kicked seven and six goals respectively in the win.

Premier C contained even bigger winning margins with the three M’s all having big wins. Monash Blues (5-0) stay a game clear in top spot thanks to a 60 point win at Banyule (2-3). The Blues had 11 goal kickers in a brilliant team display. Mazenod (4-1) pommelled the previously impressive Peninsula (3-2) to the tune of 117 points. The Pirates could only managed three goals for the day whilst the Nodders had 10 goal kickers in the rout.

The closest match of the round was at Scammell Reserve where last season’s two relegated Premier B sides met. It was the visiting Old Ivanhoe (2-3) who prevailed by  27 points over the winless Krushers. Aaron Cloke brought his Junior goal kicking talents to the senior side in a shining light for Oakleigh (0-5).