Round ten, and the cat is suddenly thrown amongst the pigeons, mark II 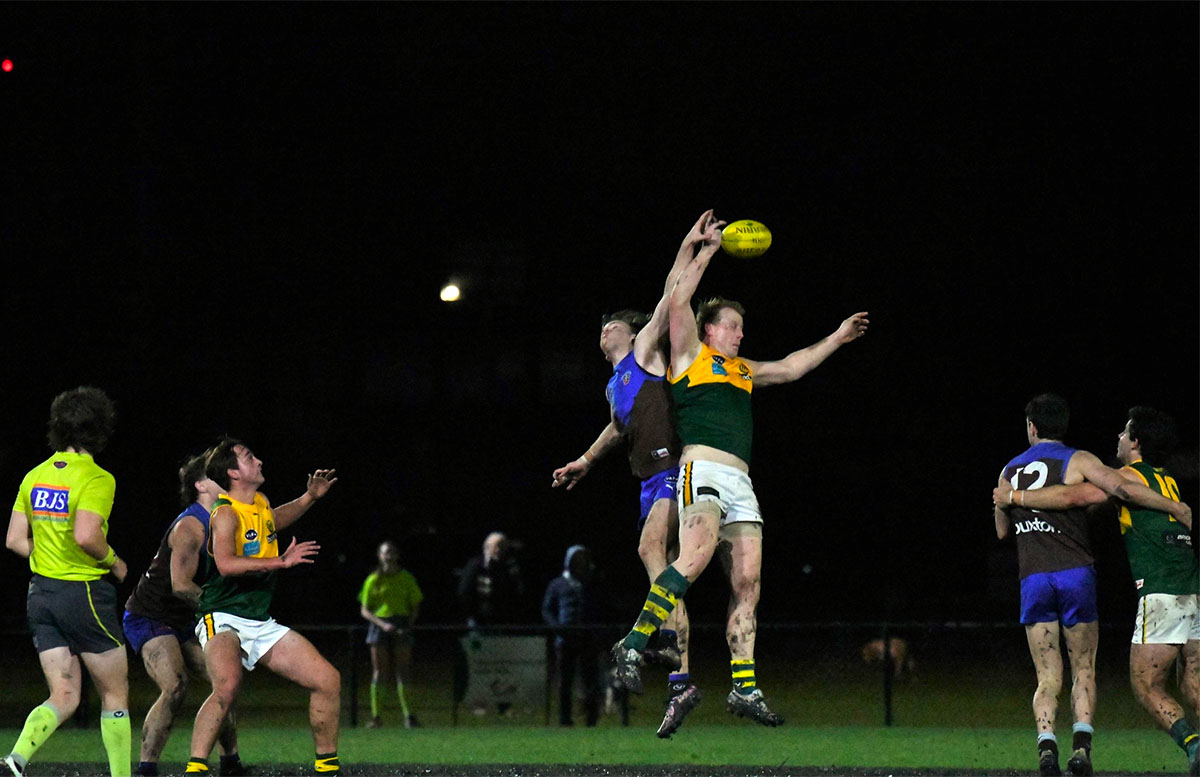 If round nine in Premier C Men’s said, “it’s time I shook this competition up a bit”, then round ten said, “you ain’t seen nothing yet”. Here’s what took place over the Queen’s Birthday long weekend.

Ormond regained form with a resounding clatter under the Friday night lights, scoring a ten-point win over the ladder leaders Hampton Rovers that owed as much to grit and tenacity as it did to style and flair.  Ormond started well enough, taking a two-goal lead from the first quarter and holding that advantage for most of the night.  Rovers being three players down by half-time did not help their cause one bit, but that would be to downplay the fact that whilst Rovers had plenty of the play, Ormond were cleaner when it mattered and capitalised on the turnovers that they created.  Hampton Rovers were in no way disgraced, but the resolute defence and sure ball handling of the brown-and-blues ensured that there was no way back into the game from them.  Tom Buckley kicked three for Ormond, for whom Will and Jack McCartney both did a sterling job.  James Keys kicked two goals for Hampton, with Sam Clements a winner on the night.

Some of the best victories come on days when the team isn’t quite at its scintillating best, but does what it needs to do to ensure that the win is banked.  The win is still worth four points, but it says even more of the team’s character that they can do the hard work when it’s needed.  This was one such day for Old Ivanhoe.  UHS-VU came to play here, there’s no doubt about that, but the boys from Chelsworth Park kicked the only five goals of the first half, and this proved decisive.  Whilst UHS-VU kicked the first two of the second half to reduce the deficit to 18 points, Old Ivanhoe were able to steady from the half-way mark of the third quarter and pull away in the final term.  UHS-VU’s inaccuracy didn’t help them much, but in reality Old Ivanhoe were too solid to let this one slip.  Luke Scuderi with five, and best-afield Harrison Frazer with four contributed all but one of Old Ivanhoe’s goals.  Ben Cracknell and Ben Dimattina flew the flag best for UHS-VU.

In terms of stirring, backs-to-the-wall victories, Parkdale Vultures will see this as one of their very best.  The Vultures gave up four goals before they got on the board themselves, and when Old Geelong kicked the first goal of the second term a long afternoon seemed on the cards.  From there though, Old Geelong were to be allowed only another two goals for the rest of the day as Parkdale clawed back the initiative.  The margin was clawed back to 22 at the half, and 14 turning for home, but it is in the final term where Parkdale really went to work.  A return of 4.6 whilst holding Old Geelong scoreless was enough to seal the points, the final victory margin of 16 ensuring that the club song was sung loudly and proudly in the home rooms at Gerry Green Reserve.  Dylan Glascott was Parkdale’s only multiple scorer with two, with Dan Knowles their best.  Toby Lever and Liam Higgins kicked two goals each for Old Geelong, with Sam Harrison strong for the vanquished.

Old Mentonians hosted Preston Bullants and the game was as good as over at quarter time, as the undermanned Bullants conceded 40 points to a solitary behind of their own.  Nobody can accuse this Preston side of a lack of heart, but they were outclassed here by an Old Mentonians unit determined to create some mayhem.  They had no answer to Tom Morecroft, who kicked a season-high eight goals, nor to a stingy defence that allowed them a mere four goals for the day, half of these coming in a mid-third term flurry.  Morecroft was a unanimous choice for best afield, while Angus Grant and Tom McCarthy were also standouts for the rampaging Panthers.

Monash Blues reclaimed top spot on the Premier C ladder, but not without one heck of a battle from a Marcellin side that for three quarters gave every bit as good as what they got.  After Monash got the jump early in the first term, Marcellin responded in kind to only trail by a point at the first change.  This was extended to eight at the half-way mark, but Marcellin continued to throw all that they had at their more fancied opponents to go to the last break only four points in arrears.  Sadly for them this is where their resistance was broken down as Monash’s twelve last quarter scores netted them 6.6, while Marcellin could only land one goal in response.  The win will look comfortable enough in future years, but that will belie the struggle to get there.  Lachlan Rush kicked three goals for Monash with Matthew Capetola kicking two.  Nick Darling with three goals and Beau Harris two were strong for Marcellin.