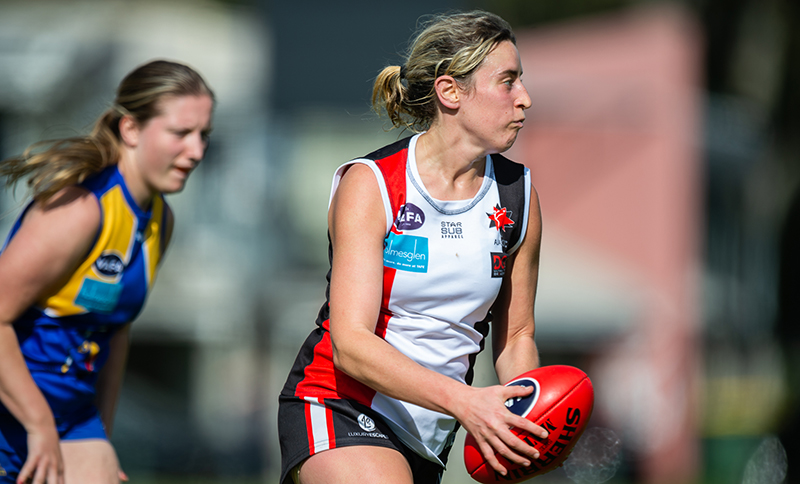 There weren’t too many players in the Power House line up that could be stopped on the weekend, with 7 individual goal kickers and a dominate 48 point win over Preston Bullants. Of those 7 goal kickers, Catherine Bartholomew led the way with 3 majors and Britany Tancred slotted 2. For the third time this season, it was Grace Curran who was best afield for Power House, whilst Alli Fisher and Kaitlin Pike were the shining lights for the Bullants. Preston are still in search of their first victory of 2021, but for Power House, this was an important win, as they now sit outside the top 4 only on percentage.

Three goals from Gabrielle Mendelow and a consistent four quarter performance was the formula behind a convincing 34 point win to AJAX over Bulleen Templestowe. Sending through 3 first quarter majors, then 1 goal in each of the following quarters, it was an accurate display of goal kicking from AJAX, who now sit comfortably in second position on the ladder and hot on the heels of first-placed Hampton Rovers. Josephine Pope added a goal to her impressive season tally (14 goals) but unfortunately that was the only time the Bullants were able to hit the scoreboard. They will now turn their attention to causing an upset against Glen Eira in Round 11 in a bid to restart their season after the covid layoff.

An impressive final term wasn’t enough for Oakleigh, as they fell victim to Glen Eira by 14 points at Packer Reserve. Leading by 18 points at three-quarter time, the Gryphons were held goalless in the last quarter, however Oakleigh struggled to convert their strong defensive efforts into scoreboard pressure, only adding one goal to their score. The break in the season didn’t affect Gryphons star Maddy Lister, as she was best on ground for a third straight game. Mia Fortune and Victoria Wilson Wall put forward significant games for Oakleigh, both kicking a goal and finding themselves amongst the best. A game this week against the winless Preston Bullants provides Oakleigh with opportunity to maintain their spot in the top 4 heading into the remaining few rounds of the season.

The floodgates were open from start to finish at Gary Smorgon Oval, as Hampton Rovers demolished South Melbourne Districts to the tune of 94 points. Sending through 14 majors, 6 of which came in a dominant second quarter, Stephanie Peaccock had a field day with a 7-goal haul. Maegen Miller chipped in with three goals of her own, alongside 4 other individual goal kickers. It’s been a tough campaign for South Melbourne, who have only been able to register one victory so far in 2021. Solid performances from Rohanna Crouch and Tara Whitehead would be encouraging, and with 4 matches left, they will have their sights set on causing an upset along the way.