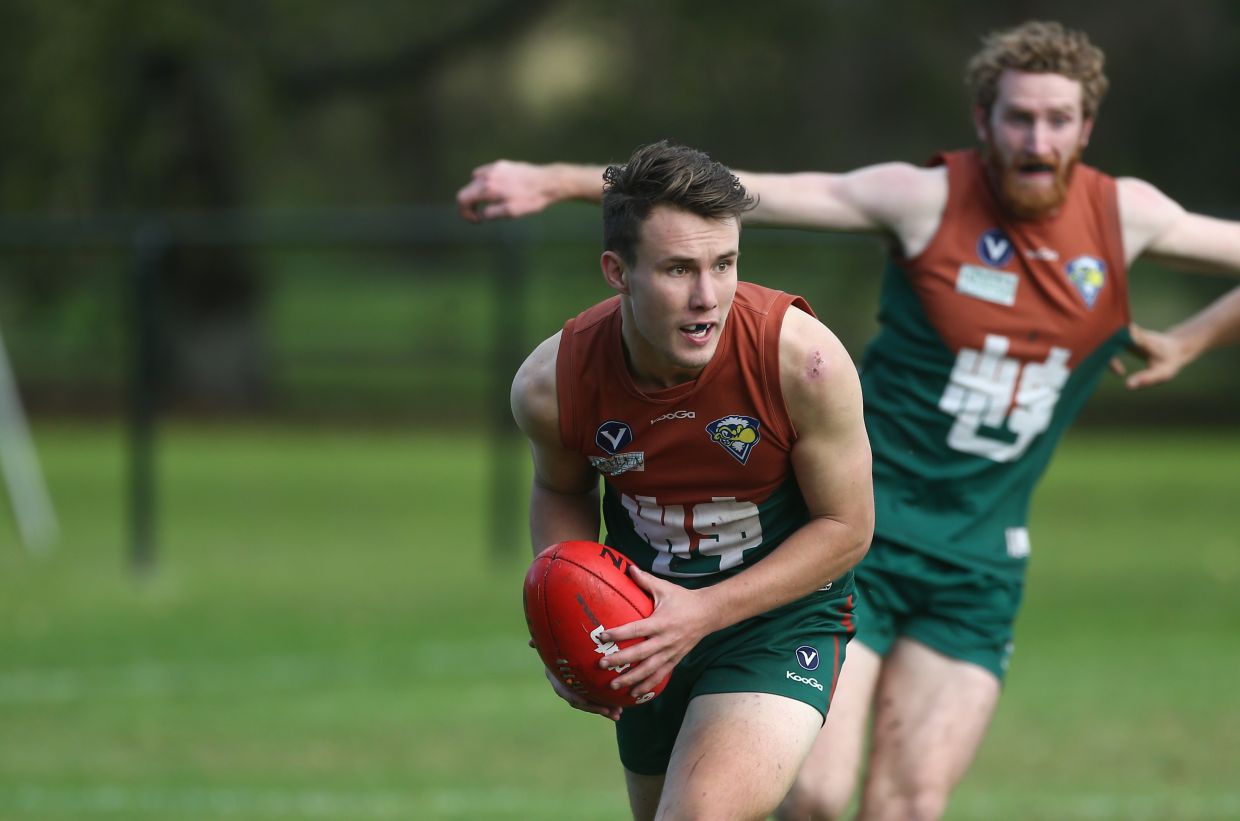 It was the most anticipated game of the season so far and it didn’t disappoint as the two undefeated teams Hawthorn and Glen Eira faced off in round 10. The Vultures had a stirring last quarter comeback over the Swans. Canterbury rebounded, Parkside recorded their maiden victory in a five point thriller over Power House and La Trobe may be the form team of the division. Lets check out the games…

It was a five goal barrage in the fourth quarter that saw the Vultures upset South Melbourne in an eight point thriller, 84-76, at Brens Oval.  In a tightly contested game the Swans held a narrow two point lead heading into the final term but it was in the final term where UHS-VU won the game. Led by Charles Jackson in a best on ground performance, the Vultures returned to the winners’ list after two straight defeats. Jason Clifford was fantastic booting six goals for the Swans but it wasn’t enough to secure his team the win. Both teams are part of the battling pack tied on 20 points chasing the leaders at the top of the ladder.

Canterbury rediscovered the winning form during the bye week as they thumped the Falcons by 50 points, 116-66, at Canterbury Sportsground. In a dominant first half Canterbury booted 12 goals to take a commanding lead that they didn’t surrender for the rest of the game. Rohan Walmsley was the star kicking five goals for the Cobras in a man of the match performance. While Tyson Cattle was the best for Albert Park in the defeat. Canterbury recorded their first win since round 4, and have seemed to found their scoring fire-power that eluded them over the past few weeks.

La Trobe continue their winning streak, now at six straight games, with an absolute demolishing of Aquinas, 113-7, holding the Bloods to a solitary goal. It was domination from the opening bounce as La Trobe kept Aquinas from scoring a goal in the first half while they peppered the scoreboard with 16 scoring shots. Mitchell Gleeson booted six goals in the thrashing and Jacob Christie was the best on the ground. With the victory, La Trobe emerge with a three game cushion for the third place on the ladder and received a huge percentage boost in the process.

In a top of the table clash between the two unbeaten teams, it was the visiting Glen Eira Saints that stunned the Hawthorn Hawks by 13 points, 102-89, at their home ground Rathmines Road Reserve. Put it down to nerves in an opening quarter where the Saints only recorded a single behind, while the Hawks ran out to a quick fire six-goal lead. However the Saints showcased their defence, the best in the division, containing Hawthorn to only two goals in the second while their forwards were able to boot seven majors and bring themselves right back into the contest. The third quarter was hotly contested as Hawthorn wrestled back the lead but a final quarter seven goal blitz by the Saints was enough to secure them the win and remain as the lone unbeaten team. Julius Waras Carstensen was the best on the reserve kicking six goals in the impressive victory. Jason Ince’s three goals were valiant in the defeat for the Hawks but they struggled to unleash their incredible scoring prowess against the tough Saints defenders. The game lived up to the expectations and can’t wait for the return rubber in round 18 where the result may have finals implications.

It was a very nervous last quarter for the Red Devils but they held on to record their maiden victory of season 2016 as they defeated Power House by 5 points, 61-56, at Ross Gregory Oval. Parkside capitalised on a strong third quarter kicking three goals and holding Power House to only three behinds to take a 16-point lead into the final term. They recorded the win however the Red Devils can thank Power House’s inaccurate aim in front of goal to allow them to record the win. Power House kicked two goals but also had five behinds, while Parkside could only score a single goal, that resulted in Power House letting the game slip through their fingers. It was a stirring win for Parkside who will now take this new found confidence into next round’s match-up with Elsternwick.

Swinburne dominated every quarter to defeat the Wickers handily by 31 points, 96-65, at St James Park. In a complete team effort, the Razorbacks had 11 individual goal-kickers in their third victory in the past four weeks. Benjamin Lewis and Charles Carson were the stars for Swinburne with Thomas Kennedy and Richard Lugg each kicking two goals, while Andrew Oldfield was the best for Elsternwick in a tough day for the club. With the win, Swinburne remains in contention for a finals position as our attention switches in the final half of the season but has the toughest test in Division 3 in the next round – a trip to Packer Reserve to face Glen Eira – Elsternwick will look to bounce back next round against Parkside.

Glen Eira will remain unbeaten as they should be too strong on the backlines to hold off Swinburne. Hawthorn will look to take out their frustration of losing their first game of the season against Aquinas. The Vultures and the Cobras will hope that winning feeling extends to a second straight week as they face off against Albert Park and South Melbourne respectively. While La Trobe will look to make it seven straight wins as they host a reeling Power House in what poses to be an exciting round 11.