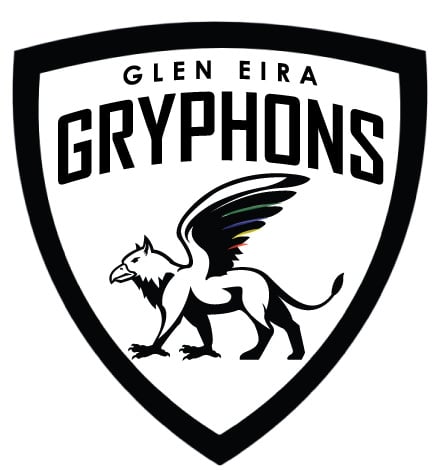 Under 19/Club XVIII: Same as above

Monash Gryphons Amateur Football Club was established in 1991 by members and associates of CIT Staff & Student Union and admitted to the VAFA G Section South competition.  The Club was named the Monash Gryphons Amateur Football Club with the Gryphon originating from the mascot of the Chisholm Institute of Technology (Caulfield Campus previous title before Monash University took control in 1991).

Finishing seventh in their first season, the Club played the ensuing two years in Club XVIII South before being asked to return to G Section where they have gone up and down the ranks of the VAFA sections ever since; albeit without the ultimate success for 20 years.

The Gryphons weren’t able to garner their first flag until 2010 when they swept Division 4 to claim both the seniors and reserves flag. At the beginning of the 2016 season, the Gryphons shared playing resources with Glen Eira as they struggled to field two teams, opting to withdraw from Division 2 and enter Club XVIII where they have remained for three years.

Glen Eira Saints and Monash Gryphons will continue to operate in their own entit...read more

The VAFA has been advised Monash Gryphons AFC and Glen Eira AFC will join forces...read more

Finally… Footy is back – Division 2 Preview

Brenton Mann @BrentyMann After a long and arduous summer, round 1 has arrived ...read more