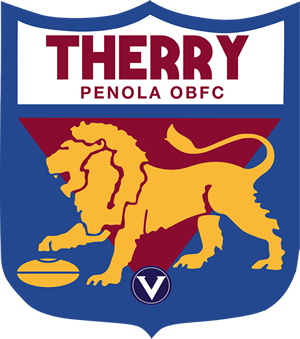 Therry Penola originally commenced in the VAFA in 1974 as Glenroy Amateur Football Club. By the 1978 season the club had aligned itself with Therry College, and adopted the name of Therry Corpus Christ Old Boys. By 1994 Therry College ceased to exist and had merged with another school to form Penola Catholic College, but it took until 1997 for a final name change to Therry Penola took place. Afer finishing runner up in F Section in 1981, Therry broke through for their first senior premiership the next year, the E Section decider against Banyule. A second premiership in 1984 in D Section, followed by a runner up finish in 1985 meant the Lions had climbed four sections in five years. A further runner up finish in B Section in 1989 meant that Therry were now in A Section. Two fifth placed finishes before being relegated was the result before they bounced back via another runners-up position in B Section had them back for just one more season. The club slowly slipped to Division 2, albeit they collected another C Section premiership in 2000 before the slide. By the end of the first decade of the 21st Century, Therry Penola were ready to climb again. The arrival of club legend and 300 Game Club member Denis Castaldi as senior coach in 2013 brought immediate success. The Division 2 premiership was followed by an unbeaten home and away season in 2014, before going down to Williamstown CYMS twice in the finals. In 2017, the Lions fielded a team in Development Division 3 of the inaugural season of VAFA Women’s and won their inaugural flag in 2019 in Division 2.

Peverill to coach Lions in 2019

Therry Penola is pleased to announce that Damien Peverill will coach the club in...read more

By Damien Ractliffe THERRY Penola is excited to announce that former Essendon...read more

Some of Therry Penola's finest will join forces with Brendan Fevola for the Ric...read more

Lions and Bombers set to meet in Division 1 blockbuster

By Damien Ractliffe As the Premier grades enjoy a bye entering the last month o...read more

Therry Penola AFC will face off with Yarrawonga FC in the 'Ricky Bannister Cup' ...read more

This week the Tragics were joined by Division 2 scribe and 88.3 Souther FM's, Br...read more

RICKY BANNISTER CUP IS ON AGAIN

It's on again. VAFA Premier C club Therry Penola are taking on the Yarrawonga Pi...read more