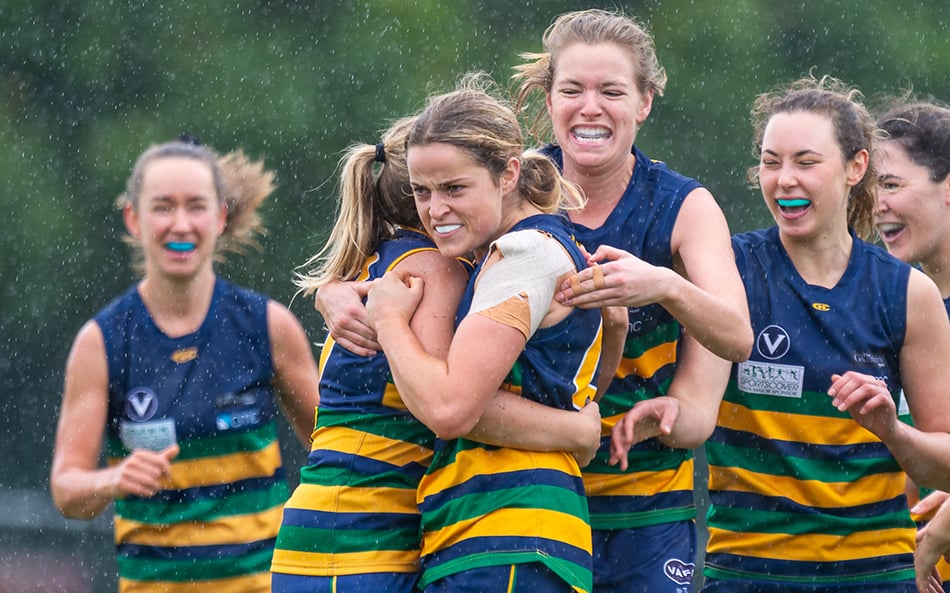 Marcellin well and truly earned the four points on the weekend and maintained their undefeated status in William Buck Premier Women’s, holding on for a gutsy 12-point win over Old Trinity. With no fit players left on the bench in the last quarter, Amber Micallef starred for Marcellin, not only taking best on ground honours, but also kicking the match-sealing goal. She was supported strongly by fellow midfielders Maddie Di Cosmo and Laura Robertson, whilst it was Char Grieve across half back, and Isabella Farchione on the wing who provided Marcellin with drive forward all game. Old Trinity were led well by Madeline Murphy and Sally Peers, but it was not enough to notch their first win of the season.

As both teams entered the round 2-1, the clash between Caulfield Grammarians and Kew lived up to expectations, with Caulfield holding off a second half comeback from Kew to leave Glen Huntly Oval as 2-point winners. Trailing by 13 points at the main break, Kew kicked two goals to one in the third term to cut the margin back to just 5 points at three quarter time. Despite Krystal Shaw kicking 2 of her 5 goals for Kew in the last quarter, it wasn’t enough as Caulfield came up with some crucial scores when it mattered most, including a 2 goal effort from Maddie Wilson. Irena Malliaras put forward a best on ground display in the midfield, and Cheree Peters showed her class, fighting through a tag to have an impact for her team.

Old Xaverians walked away 8-point winners and fourth spot on the ladder, in a tight arm wrestle with St Mary’s Salesian at Ferndale Park. Cassandra Pittard (Old Xaverians) played her best game for the season, alongside Gabby Golds and Sarah Anderson who were also amongst the best for their team. Emily Roos and Pia Hobday hit the scoreboard for St Mary’s Salesians, however two goals from Brodi Harris and one from Madison Sorrenti helped Xavs register their third win for the season, as St Mary’s continue the search for their first points in 2021.

A true epic took place at McAlister Oval, with a goal on the final siren from Saints star Sarah Cameron sealing a 3-point win for SKOB Saints over West Brunswick. The lead changed hands multiple times throughout the day, however the margin for either team never entered double digits. As the Saints took control of the game early, a dominant midfield display from West Brunswick allowed them to take a four-point lead into the main break. A long bomb from Daila Edward (SKOB) was the only goal in a tight third term, as SKOB backs Tayla Nichols and Elle McLindin held firm. Despite a strong showing from Thomay Nicolaou and Nahkita Wolfe (West Brunswick), the game received the grandstand finished it deserved, as the last play of the day saw a long run from Elle McLindin, end in a strong mark to Cameron, who calmly iced the game right on the siren.