Late showers could do little to dampen Hawthorn Spartans’ spirit as they claimed back-to-back Club XVIII (1) flags and their third in four years when they defeated St Francis Xavier by 62 points at Sportscover Arena.

Led by Landrigan/King Medallist, Jason Yap, the Spartans gained the ascendancy early with seven of the first nine goals and refused to allow the X-Men a look in.

Leading by 41 at the last break, the Spartans continued to apply pressure with four goals to one in the final term.

Luke Edwards was unstoppable forward of centre as he sent home four majors, while Nick Gieschen and Sam Armstrong joined Yap with their own dominant performances.

Brent Sheers and Christopher Hughes fought valiantly for the X-Men, while their four majors were spread amongst four individual goal kickers.

They were fantastic in the back end of the season, finishing fourth at the conclusion of the home and away fixture and fighting through the semi and preliminary finals to today’s main event.

Earlier in the day, Old Geelong started what could be a succession of OGs premierships in 2016 when they defeated West Brunswick for the Club XVIII (2) premiership and second-ever flag at that level.

Despite trailing at every break and heading into the fourth term 13 points down, OGs galvanised and used the slight Elsternwick breeze to storm home with four unanswered goals.

Matthew Graver was awarded the best on ground medallion for his starring performance for OGs, while section leading goal kicker, Josh Archer, bagged four majors and captain-coach Lewis Chiodo chipped in with two.

The Westies fought valiantly and a lead for the majority of the match is testament to their talent and determination.

Angus Campbell and Daniel Monacella were outstanding around the ground, while Kyle Oppelaar kicked four goals and took his season tally to 31 from just seven games. 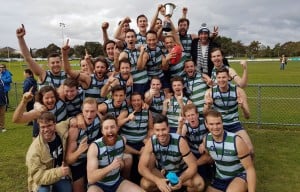