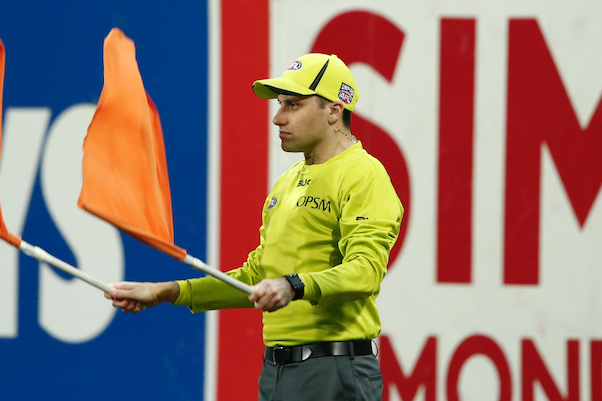 Former VAFA and current AFL umpire, Steven Piperno, was one of the many umpires who spent four months in the sunny state, moving away for that period in order for the game to continue.

Steve or ‘Pip’, has goal umpired 108 AFL games after he honed is craft through VAFA football via the VFL before making the elite level in 2015. Pip has umpired 13 finals and impressively the last three AFL Grand Finals – is a testament to his dedication and talent at the craft.

The VAFA’s Matt Dervan took the time to reminisce with Pip about his months away, his Grand Final experiences and how the VAFA helped him on his current journey.

We all had different feelings and emotions about the unknown that was ahead of us. What was your personal vibe and feeling packing up and moving to QLD on that first Monday in July?

Since we were given only two days notice before leaving for Queensland, it was all very exciting yet chaotic. I had to quickly prepare my home for being empty for 32 days – which was the original commitment asked of players and umpires – and before we knew it, we were on the plane to Queensland. The AFL fixtures beyond that week hadn’t been released and we were heading off to a very unknown environment. We didn’t know what quarantine would be like, how many games we’d be servicing or what footy would look like in the long term.

How will you look back on the experience over the last 4 months?

The whole experience was a crazy ride from day one of quarantine through to the plane ride coming home four months later. I will look back on the last four months as a wonderful opportunity and an experience that I’ll never forget. The experience included forging new friendships, living 100m from the Gold Coast beach during the middle of Melbourne’s winter, umpiring every second day during footy frenzies, missing loved ones back home, umpiring my 100th match in Darwin and all of the laughs fun memories in between. It truly was a bizarre and unique season, one which I am very grateful to have been involved in.

I obviously experienced this for the first time this year, but can you talk me through the range of emotions you feel in being appointed to an AFL Grand Final, and the differences in the build-up to each of your three Grand Finals?

The main emotion I have experienced each time has predominately been disbelief. I admire the ability of every umpire on the list and constantly learn so much from everyone, so to be chosen to represent the group is something that, while I feel very honoured, is still hard to believe. There is also the disbelief that I have the opportunity to be involved in the biggest day in Australian sport, a day that means so much to so many people and a day that I grew up with such special memories of myself. The build-up in 2020 was very different, it certainly didn’t have that Grand Final week vibe in Queensland like it typically does in Melbourne. The night Grand Final was a very different experience compared to my previous experiences. The day Grand Final all happens very quickly and is over before you know it, whereas it felt like there was a lot of waiting around for the night Grand Final, making it very hard to know what to do and how to pass the time in the lead up to the game.

What made this Grand Final unique to you and how will you look back on the 2020 season personally?

The 2020 Grand Final will be one that is talked about for years to come given how unique the circumstances were, therefore, it is quite special to be involved in such a historic moment. To be appointed to the 2020 Grand Final was a fortunate way to end 4 months in the hub. 2020 was a crazy ride and I’ll forever remember the experience of relocating to Queensland for 16 weeks, experiencing hub life with umpires from all over the country, umpiring every second or third day during the squashed fixtures and all the laughs and memories in-between.

At the start of your umpiring career, what originally attracted you the VAFA?

I was a student at Marcellin College when I began umpiring and I had always kept a keen eye on how the Marcellin Old Boys were fairing in the VAFA. Despite growing up in the north east of Melbourne with the Northern Football League on my doorstep, it was the connection to having these school-based teams competing that convinced me to join the ‘Ammos’ umpiring group.

What’s your advice for up and coming umpires?

My advice is to up and coming umpires is to use all resources available to you. The obvious advice is to listen to your coaches and those around you. Beyond that, find the best umpires in your group to study and understand what they do that makes them the best, and watch AFL umpires closely to get a feel of what the expectation of umpiring at the elite level looks like.

Why should umpires come to the VAFA?

The VAFA has a wonderfully friendly and accepting environment. As an extremely shy 15-year-old, I felt welcomed and included from the start and still have some wonderful friendships with fellow VAFA umpires over 15 years later. The footy is of a great standard and the umpiring is of high quality which makes it easier and better to learn from.