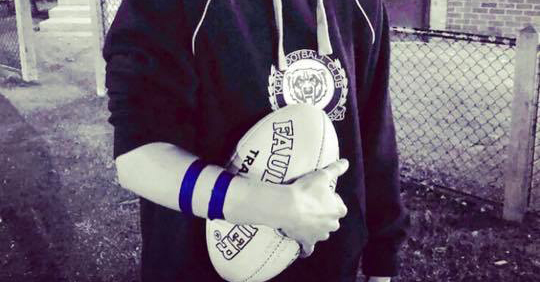 #TapeUpForYourMates this Thick & Thin Round

With around 13,000 men and women playing in the VAFA each week, it is likely that most of, if not all, our clubs will have someone within their ranks who is either dealing with mental health issues personally, or supporting a mate through hard times.

Statistically, one in four young Australians will experience a mental health issue at some point, but unlike some other illnesses, discussing mental health concerns has been a difficult conversation for many people to have.

For this very reason, Simon Hogan, the former premiership midfielder with Uni Blacks, and his mate Scott Sherwin (former skipper at Old Scotch) set the wheels in motion to roll out a mental health campaign within the VAFA community that we all know today as Thick & Thin.

Thick & Thin is a not-for-profit initiative that focusses on the awareness of mental health concerns amongst our community, as well as the normalisation of mental health issues. The initiative also encourages all VAFA clubs to register their players, officials or supporters in specialised mental health first aid training programs at a subsidised cost.

So how did the concept of Thick & Thin come about?

Simon was a budding young footballer, who, for anyone looking in from the outside, would think he had the world at his feet.

He was drafted to AFL club Geelong at the same time as their champion and favourite son Joel Selwood, and he was surely destined for great things. However, something was eating away at him, and at the end of his third season of training and playing at the highest level, Simon suffered from a number of episodes of severe depression and anxiety, that would ultimately cut short his AFL dream after 22 games.

Following on from his stint at Geelong, Simon went on to complete a science degree, majoring in psychology, and returned to the VAFA where he played out the remainder of his career, and in season 2015, he oversaw the launch of the inaugural Thick & Thin round.

In 2019, with the charity now in its fifth year, Simon, along with the support of William Balme, and many other current and past players from within the VAFA club ranks, continue with their great work of raising awareness and smashing the stigma associated with mental health, and making mental health first aid training more cost effective and accessible for all within our community.

This year, Thick & Thin have ditched the socks in favour of tape, and have asked that the players, officials and supporters of all clubs #TapeUpForYourMates with two strips of blue tape on the right forearm in what will be a powerful display of solidarity and support of the cause.