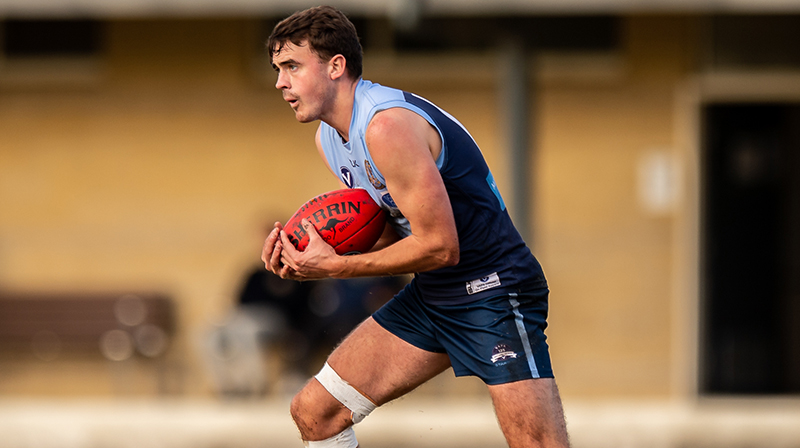 The top 4 protected their chances in the best way possible in Round 12, with all four claiming wins. The Saints, however, continued their winning ways and maintained touch with the Two Blues.

After a tight opening term, Old Camberwell retained top pot with a 19-point win over Brunswick. The Wellers trailed by two points at quarter time but slotted five unanswered goals in a match-winning second quarter. Caine Hillier was a one-man band in front of goal for the Wellers and finished the game with five of their 10, while Cameron Wilson and Robert Deev mirrored their standout performances from two games prior. Maxwell Naughton was the NOBS’ best for the second week in a row and kicked two goals alongside William Nevill. The Wellers are now less than 3% above Whitefriars in the top two spots while NOBS have six games to clinch their first win.

Whitefriars inched closer to top spot following their 45-point victory over PEGS at PEGS Sporting Fields. Scores were level at 24-24 apiece at half-time, before the Friars booted five unanswered in the third and another two in the fourth. Kristan Height led from the front for the Friars with four goals in another dominant performance, while Glenn Ibbott was named best afield. The loss all but ends PEGS’ chances of finals as they now fall four games outside the four. They were well-served by Cam Livori and Thomas Riley.

The third kahuna in the one-loss club, Kew FC defeated Old Peninsula by 35 points at Victoria Park. Leading by 12 points at half-time, the Bears nailed five straight goals in the third to secure their ninth win of the season. Jack Jenkins top-scored with three goals in his second game for the Bears and Peter Couvalias continued his strong form as BOG. Tyson Jackson and veteran star Shaun Payze fought valiantly for the Pirates as they attempt to climb out of the bottom two in the final third of the season.

The fourth-placed Prahran Assumption maintained a two-game buffer over St Mary’s in fifth after they defeated Therry Penola by 18 points at Toorak Park. The Two Blues trailed by 18 points following a hot start from the Lions but edged back into the game with eight goals to two thereafter. Rory Brodie continued to star for Prahran and was best afield in their comeback win alongside Jonathon Simonetta and captain James Musster. Joel Costello and three goals from Glen Widdicombe were the standouts for Therry.

The Saints are marching in Division 1 as they secured their second win in a row and fifth from their past six games, outlasting Oakleigh to the tune of 26 points. The Saints maintained a small buffer in the first half before kicking away with five goals to one in the third. Thomas McDermott was once again a constant threat in front of goal and finished with a season-high six majors, while Jacob McElroy and Louis Holmes each booted three. Aaron Cloke slotted four and took his season tally to 29 for the Krushers, while Ethan Faragher was their best for the second week in a row.