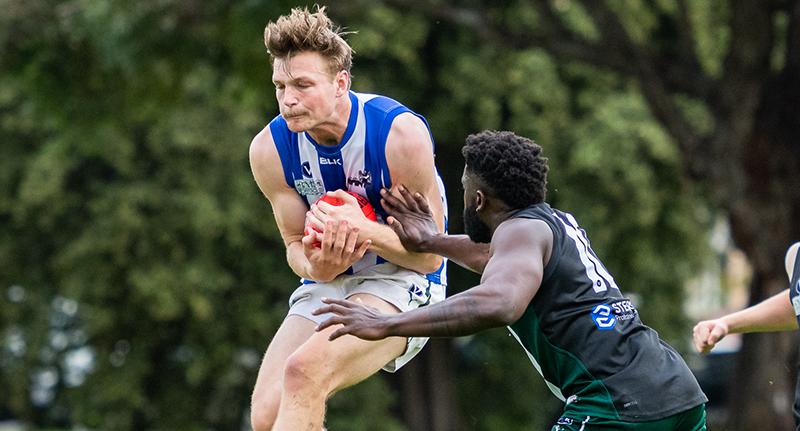 Despite these two sides being at opposite ends of the ladder (3rd vs 8th), they may be better matched than their current positions suggest, with the Bloods going down to Parade by just 34 points in Round 5. In fact, outside of their Round 2 demolition of Bulleen Temp, the Bloods’ 10.10 (70) against Parade was their second-highest score of the season. They’ve since struggled with consecutive losses to Ivanhoe AFC and MHSOB, but don’t count out the boys from Aquinas after an extended break – particularly with the impressive form of Jacob Burdett, Joseph Morrison-Story, Lachlan Barnes, and Russell Foster. As for the Raiders, Marcus Nolan has put in an incredible opening seven rounds as they’ve suffered just the one loss to MHSOB. Anthony Cafari has been one of several standouts with 18 goals from his seven matches putting him equal-fifth in the Div 2 goal kicking race.

Manningham Cobras will be the next side tasked with slowing down the undefeated Glen Eira Gryphons. The Cobras, who sit sixth with three wins and four losses, will be hoping for a far better showing than the last meeting between these two sides when they managed just 1.5 (11) and went down by 140 points. It was the only game this season where the Cobras have given up more than 100 points. On the flip side, the Gryphons have kicked 100 points in four of their games this year, with three of those 140 or more. Callum Drenth has been unstoppable up forward with 29 goals, while Todd Richardson, Daniel McDonald, and Francis D’Agostino should poll well after dominating across the ground.

The Westies and YOG’s will meet at Ransford Oval in their return bout, with the Westies running out 77-point winners when they met in Round 3. The Westies have continued their impressive form with three wins from their four games since, including a 62-point win over Power House in their last outing. It’s been a tough season for the YOG’s so far, with their two wins seating them one above the bottom two. They will, however, enter with confidence after dispatching the Bullants by 84 points in Round 7. Calum Johnston and Rory Chipman have been standouts for YOG’s this season while Abraham Jones, Stirling Reeve and Daniel Yacoub have each been named in the best five times for the Westies.

Ivanhoe AFC will be looking to maintain touch with the top four when they travel to Ross Gregory Oval this weekend. The Magpies – fifth on the ladder – were far too strong for the House in their Round 2 clash at Ivanhoe Park, running out 95-point winners. Wayne Schultz has been unstoppable for Ivanhoe, as had Wes Mayne and Connor O’Brien. Sitting ninth with one win, the House will be looking to end a four-game losing streak and will rely heavily on the in-form Brendan Wright, Travis Scotland, and Ben Circosta.

It’s a real David and Goliath operation at Ted Ajani Reserve, with the highest-scoring team facing off with the winless Bullants. The Unicorns have kicked 918 points this season at an average of 131ppg, while the Bullants have struggled in front of goal with 49ppg. Ashan Wijayakumara leads the competition with 33 goals from his seven matches while teammates James Tran and Will Suhr have been starring through the midfield. Paul Florance has returned to the Bullants with 12 majors from his six games, while Billy Wilson would be leading their B&F count.