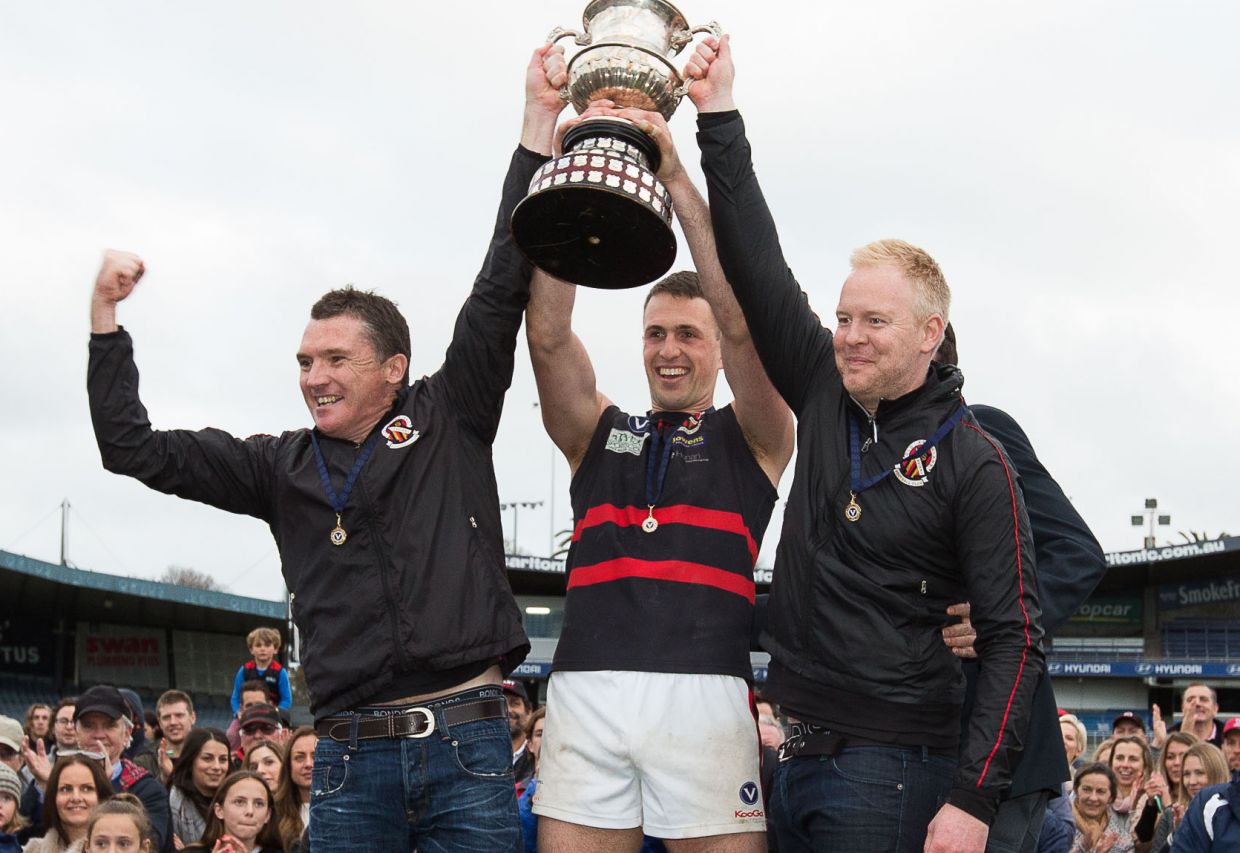 “Apart from Old Xaverians in 2016, no side from outside the top four after Round 11 has won the William Buck Premier Grand Final over the past decade,” – J. Pignataro (2021).

Despite hosting the VAFA FTLOTG Podcast and the RSN Carnival Match of the Day Broadcast, it’s rare that one listens to any statistical analysis from Giuseppe Jr. Granted, it’s often difficult to hear him over Brian Waldron’s groans of disapproval and occasional ranting, but I must admit, the former Big V NZ mascot has a point here. And it’s a good point.

When the final siren sounded at the Uni Oval on Saturday, the odds of the reigning premiers going back-to-back plummeted as they dropped to fifth spot and one game outside the four. Of course, there is the decennial oddity of 2016 when fifth (Old Trinity) played sixth (Old Xaverians) and it was, amazingly, sixth who ended up winning it all. That year, however, only two games separated first from seventh on the ladder after R11 – whereas St Bernard’s (7th) are currently five games behind SKOB (1st). See, oddity.

If we are to look at it from a more current perspective, over the past three seasons, the top four after R12 has not changed. So, if you thought the two games involving Uni Blues and Caulfield this weekend couldn’t get any bigger, recent history suggests the side who is sitting in fourth spot at 5pm on Saturday evening is finals bound.

The Blues will enter their R12 clash with the T’s as favourites after defeating them by 63 points in R7. It was their only win from the past four games, with losses to the Fields, Brighton, and Old Scotch on either side. That R7 victory, whereby they posted their only score over 100, was against a T’s side that had not yet tasted victory in 2021 and the Blues have since lost by 46 and 47, respectively. Speaking to Ayce Cordy on the Saturday Warm-Up, he will be doing his utmost to return from a hamstring injury that has sidelined him for the past two games, while they’ll be without Jay Kennedy-Harris after the former Dee tore his peck in the first half. On a more positive note, Tom Young ran important mileage into his legs through the Reserves while Rhys Hultgren put his hand up for a Seniors recall with a standout performance.

While Saturday did not go to plan for the Blues, the same can’t be said for Old Trinity after they registered their first win for the season. It had been a tough couple of months for the green and gold as they parted ways with their senior coach and blooded young players with an eye to the future. Saturday was but a glimpse of what T’s fans have in store as they outlasted – and out-kicked- Old Scotch en route to a 10-point victory. Harry Thompson, who is joining this week’s FTLTG Podcast and is always worth a listen, was best afield for the second week in a row while fellow ‘vets’ Ed Weatherson and Christos Manoussakis led from the front. There’s not a whole heap of in-between for the T’s defensively with four games of 118+ points against coupled with three of 62 or less. What the win does do is keep the T’s and Lions within touching distance of Scotch and Bernard’s at the bottom end of the ladder.

The Caulfield vs Brighton match is a genuine blockbuster and can be heard across the RSN Carnival airwaves this weekend. The Fields will be looking for a seventh consecutive win and, just as impressively, their sixth score of 100+ points from their past seven. They’re a machine up forward, we know that, but it was their midfield that lifted against the Blues last weekend as Will Edwards and Dane Crognale dominated the clearance and possession battle. They were everywhere, kick-starting everything. Add the class of Jack Wallace and Nick Baltas coming up against Harry Hill, Tom Fisher, and Nick Pavlou – my, oh my. Lastly, before I perpetually salivate over the Tonners, the idea of Jared Risol and Will Lewis going head-to-head is enough to give any VAFA a reason to tune into Tommy Flanagan’s commentary.

The Tonners came from 10 points down against a gallant OMs on Saturday and ran out 25-point winners on the back of a 10-goal-to-four second half. Referring to Will Lewis as ‘Lennox’ in R7 was seemingly one game too early but he has since been putting opposition defences on the canvas with hauls of nine and five over the past two games. He’s stood up in the absence of Jack Watts and become the dominant forward in William Buck Premier. Of course, it helps with the Brighton midfield streaming towards him. And that midfield all starts with Lachlan Filipovic who is having an outstanding season in the ruck. As if Hill, Fisher and Pavlou needed anymore assistance, Filipovic too has taken his game to another level.

There are still seven rounds remaining in William Buck Premier, but the importance of this weekend’s games can’t be understated. To hear the live call of the Caulfield vs Brighton clash + all the Around the Ground scores throughout the day, download the RSN 927 App and tune into RSN Carnival from 1pm Saturday.