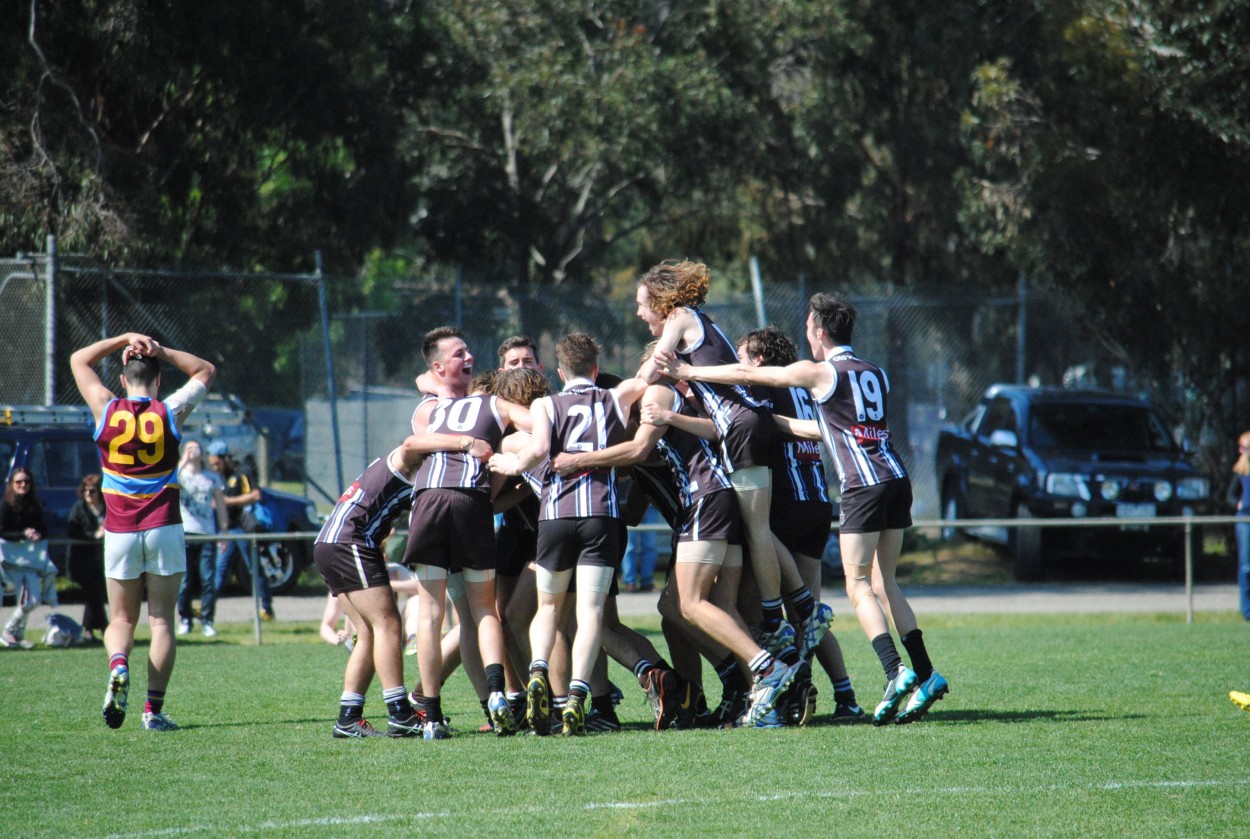 By U19 premiership coach Ray Leetham

As predicted earlier in the season the two powerhouse teams play off for the ultimate prize -the grand final cup .As the season has progressed these two sides have been the pace setters and deserve their place in the grand finale . Who will win? St.Bernards have been very solid all year and beat the Xavs in the  second semi so they are favoured plus they are experienced in September action. The punters are saying “Bernard’s, too powerful, too strong in every position” If the Xavs are a chance they must beat the Bernards at their own game by out smarting them by a different game plan otherwise it will be straight set grand final win to the boys from Essendon. Xavs coach Peter Callinan will certainly look at all options and maybe isolate Cleeve with one other forward plus running mid fielders hoping to score on an open forward line. His other play makers in Fantasia, Troiani, Miorris and Wynne are very important players in the Xavs game plan.

Bernards coach Rocky Ianello has been there before and knows finals backwards. He is pretty relaxed come game day but he takes nothing for granted. This will be a tough match with no second prize.

The dream continues for Caulfield who have come from bottom of the ladder earlier in the season to the grand finale. This team is a credit to the club and a credit to all who coach sides and are winless after the first few rounds. The self-belief has been outstanding and it shows you can come back from the “ropes” and win the most important challenges thrown at you.

Coach McCann has done a remarkable job and should be “coach of the year “ in Section 2.
Parkdale have got a great side in but Caulfield has the wow factor. If The Vultures have a chance Peake, Jayaaselan, Vorbach, Salouris and Austin need to take control from the first bounce. Luke Borella rates his boys highly and on any given day Parkdale would win but this is a grand final of a very different nature and any one can take this out.

Old Geelong have been the team of the year so they go in to this game cherry ripe for a grand final under their belt. Williamstown were really close but could not go with Old Carey so they dropped away. Can Old Carey take the next step ? They finished the season with two less wins than Old Geelong but in the big picture this does not mean much. Old Geelong need Grimshaw, Hutley and Macmillan to fire to take control of this game and OG’s coaches Matt Collister and James Wright have a game plan in action that sees them score quickly.

Grimshaw is the target up forward and he may be the difference between the two sides.

Old Carey will need Aitken, Coull, Quartermain and Clarke to be up and about early otherwise this game will get out of reach. Carey’s coach Michael Tarrant really gives his side a chance and if they play up to their ability it could be really close. Old Geelong play at Como Park so they will be full of run and be ready for a  running last quarter. Well done to both sides making the grand final and it’s a tight call.

This is an interesting game as St.Kevins have climbed the ladder over the course of the season whereas Peninsula have maintained first spot and dropped one game. They have to be favourites but St.Kevins have won both finals easily, are strong across the board and have the addition of some unders from the senior under 19 team.

Peninsula  will look to McLellan, Whitty,  S.Barbour, L.Barbour and Cribben-Rigg to set the tone of this game. If they take control the Skobbers could be under the pump. St.Kevins will base their game plan on the great form shown by Comito, Dimattina, LAttanzio,  Prossewr and Gale. These prime movers have the ability to upset Peninsula in a big way.

Skobber coach Ian Ledder has done a great job with a second unders group. His development has been significant and can’t be under valued.  Peninsula coach Peter Williamson has also done a great job. In a twelve team competition it’s not easy to finish on top. The side with the best mid field usually takes control and on Sportscover Arena the Skobber factor takes this game to a new level.

Prediction- An upset – Skobbers by 24 points