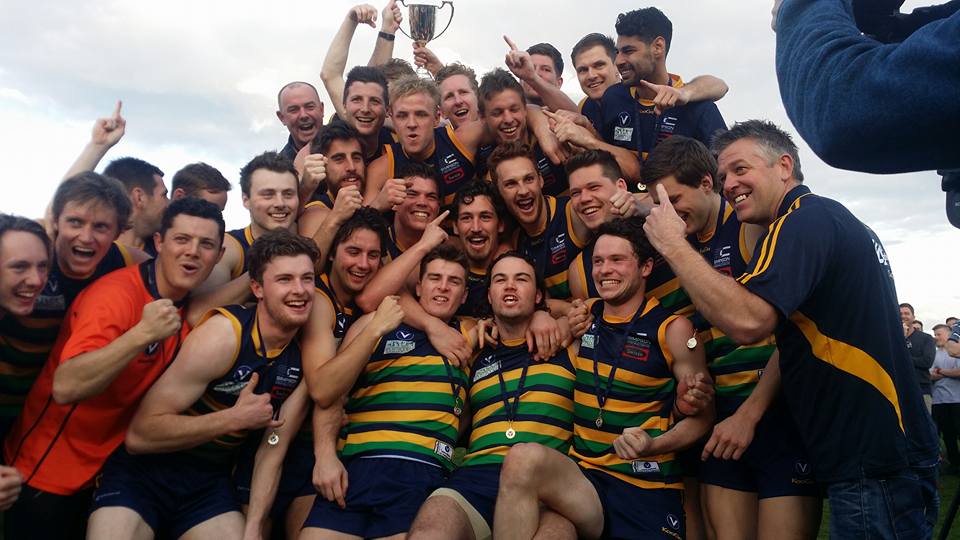 St Kevin’s Old Boys have ended their 2015 season as the undefeated Premier B champions with an unbelievable 11-point come-from-behind win against Old Melburnians at Sportcover Arena.

In front of an excited and extraordinarily vocal crowd, SKOB turned a 35-point half time deficit into one of the greatest wins in the club’s recent history.

Kicking with the Elsternwick wind in the third quarter, SKOB nailed five goals and seven behinds while keeping OMs to just one goal and one point.

Still trailing by five points heading into the final quarter, SKOB peppered OMs defenders with a bevy of inside fifty attacks, finally hitting the front for the first time throughout the match via a Stephen Gilham contested mark and conversion 23 minutes in.

With the momentum behind them, Zachary Ginies was able to put through a 40m set shot to extend the lead to 11 points and send the crowd into hysterics moments before the final siren.

Stephen Gilham starred for SKOB with three goals, earning himself the Ian Cordner Medal as best on ground in the grand final. Nick Meehan and Nick Wood were everywhere for the victors, collecting disposals at will and igniting the SKOB comeback.

Stuart Watson was the main destroyer in front of goal for OMs, snagging three and doing his utmost to swing the momentum back in his side’s favour. Lochie Borthwick continued his red-hot form and could be seen all over the ground as OMs best player.

It was a classic of a grand final and the VAFA congratulates both sides on the effort and talent they showcased on the biggest stage. Both are sure to make inroads into William Buck Premier in 2016.