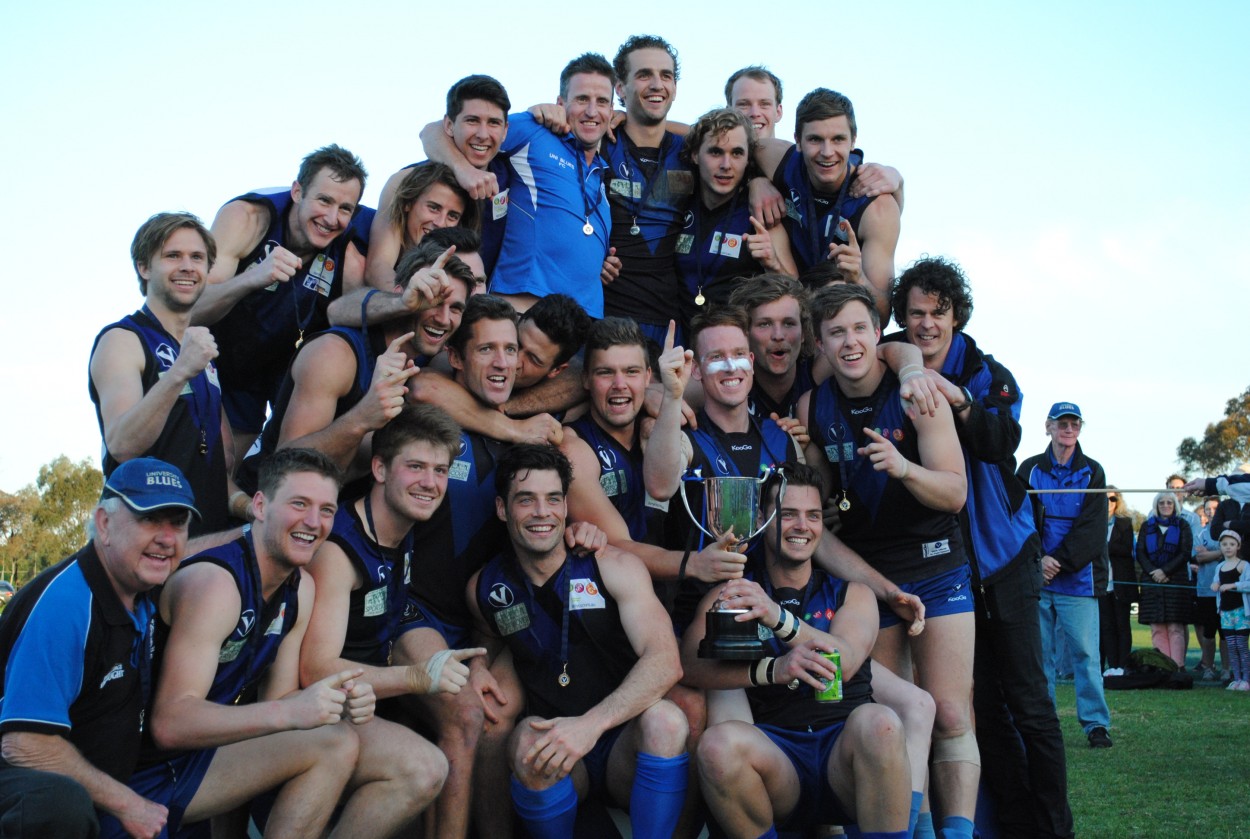 University Blues powered away from Old Carey in the last quarter to win the Premier B Grand Final by 75 points. Tom McKenzie booted six goals and was awarded the Ian Cordner Medal for the player voted as best on the ground in the Grand Final.
Blues led at every change; by 16 at quarter time, 14 at half time, 32 at three quarter time before breaking away in the last. Blues kicked the opening two goals of the last quarter inside a couple of minutes before Old Carey responded, but with the margin beyond six goals already then the floodgates opened up as Blues kicked another eight goals for the term.
Sean Carr was dynamic for Blues across half back and it was a close call with he and McKenzie amongst the votes from the Inner FM commentary team. Also catching the eye of the Ian Cordner judges was Will Cunningham and Jeremy Mugavin from Blues. Ben Smithwick was amongst Old Carey’s best, kicking three goals, but the Panthers looked lethargic and sore from three tough finals.
The game started at an electrifying pace as Blues and Old Carey both had two goals each in the first seven minutes of play. The skill level of both sides was high, the conditions at Sportscover Arena almost perfect for football. A slight breeze favoured the Glen Huntly Road end of the ground and Blues, with first use of breeze Uni took advantage, eventually booting 5.7 for the term.
Old Carey couldn’t make the same inroads when they had the breeze and despite winning the second quarter still trailed by 14 points at the main change.
As the game wore on, the week’s rest for Uni was starting to pay dividends as their players were offering more run than that of Carey’s. Al Stewart-Holmes was winning plenty of ball off the half back line, but with the exception of Smithwick, Carey struggled to get the ball in hands of their better players in dangerous positions after half time.
Blues and Carey become the first two sides from Premier Section to be relegated and bounce back within a season for at least 40 years.
On the form shown by Blues in this year’s Premier B season, they could do great things next year when they return to Premier.
University Blues                        5.7,  7.7,  12.14,  20.22  (142)
Old Carey                               3.1,  5.5,  8.6,  10.7  (67)
GOALS, University Blues : T. MacKenzie 6, R. Eade 2, P. Summers 2, P. Gardiner 2, D. Heinz 1, S. Carr 1, M. Rippon 1, J. Mugavin 1, M. James 1, W. Cuningham 1, J. Caldow 1, R. McMahon 1
Old Carey : B. Smithwick 3, M. Laidlaw 2, C. Howat 2, N. Richardson 1, L. Macleod 1, J. Reid 1
BEST, University Blues : J. Mugavin, T. MacKenzie, J. Townley, P. Summers, A. Nice, C. Williams
Old Carey : L. McQueen-Miscamble, A. Stewart-Holmes, J. Rice, B. Smithwick, T. Roach, C. Howat