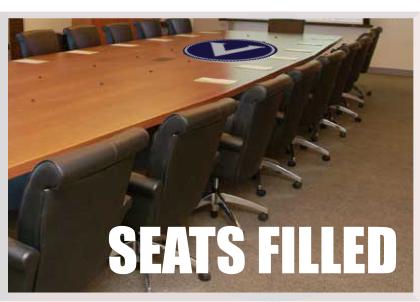 At the VAFA’s 2010 Annual General Meeting held at Melbourne Racing Club last night, former St Bede’s/Mentone Tigers triple premiership coach Luke Beveridge was elected to the VAFA board.
Beveridge was the only candidate for the vacancy brought about by the retirement of life member Dr Ross Booth, who had sat on the Association’s executive since 1986.  He has a background in audit and compliance and has most recetly been the Development Manager at Collingwood Football Club.
Beveridge was elected for a three year term, while President Bruno Conti and Davina Connors-Calhaem were re-elected for the same term.
In addition, 2010 President Bruno Conti announced the appointment of two new board members, who will serve initially for one year, but can be reappointed.
“The restructure of the VAFA board approved last year by the clubs allows us up to two discretionary appointments on top of the nine elected members. Our new members, Tim Nelson and Justin Toohey, bring professional skills and insight to a board that is rich with experience,” Conti said.

Tim Nelson won four premiership medallions with Old Paradians and had some success as a sprinter. He has enjoyed a career in executive recruitment and has developed very strong strategic, financial and marketing/business development skills.

Justin Toohey has a sporting background in cricket and community football. In 1997, he served as president of the VAFAUA. He currently Deputy CEO of the Legal Practice Liability Committee and has strong legal and strategic skills.
The new Board confirmed Bruno Conti as president and Tim Merrett as vice-president for 2011, with George Voyage, Davina Connors-Calhaem, David Scott and Merrett all reappointed as chairs of the sub-committees.