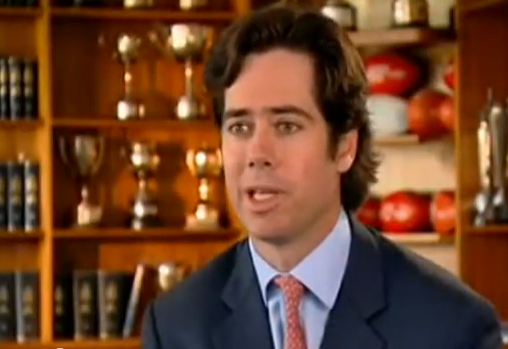 The VAFA is proud that former University Blues player and VAFA Big V Captain Gillon McLachlan has been appointed as the new AFL CEO. Gillon had a distinguished career with University Blues and was the Big V Captain of the VAFA 2001 representative side that played matches against the Victorian Country Football League and the South Australian Amateur Football League. Both matches were wins to the VAFA.
VAFA CEO, Michael Sholly paid tribute McLachlan on his appointment to the top job in Australian Rules football.
“The VAFA are delighted to have one of our representative captains take on the role as the head of football in Australia. Gillon’s understanding of community football will hold him in good stead in ensuring that the game at the top level continues its strong bond with the thousands that work and volunteer in local club football in Melbourne and across Australia.”
Gillon has always been proud of his association to the VAFA and in particular University Blues where he is a regular guest and is also often just another spectator in the crowd supporting his club.
Gillon has also been a regular attendee at the annual Big V Club Lunch, using the occasion to catch up with past Big V team mates and to generally reminisce about days playing in the VAFA.
In total Gillon played five times for the senior Big V and was a decorated player at University Blues from 1994- 2003 where he won a club Best and Fairest in 2000 and was club captain from 2000-2002. In 2003 he was awarded Life Membership of the Melbourne University Football Club.
You can catch more of Gillon talking about the VAFA in the video below.
From everyone at the VAFA – congratulations to Gillon on his appointment.