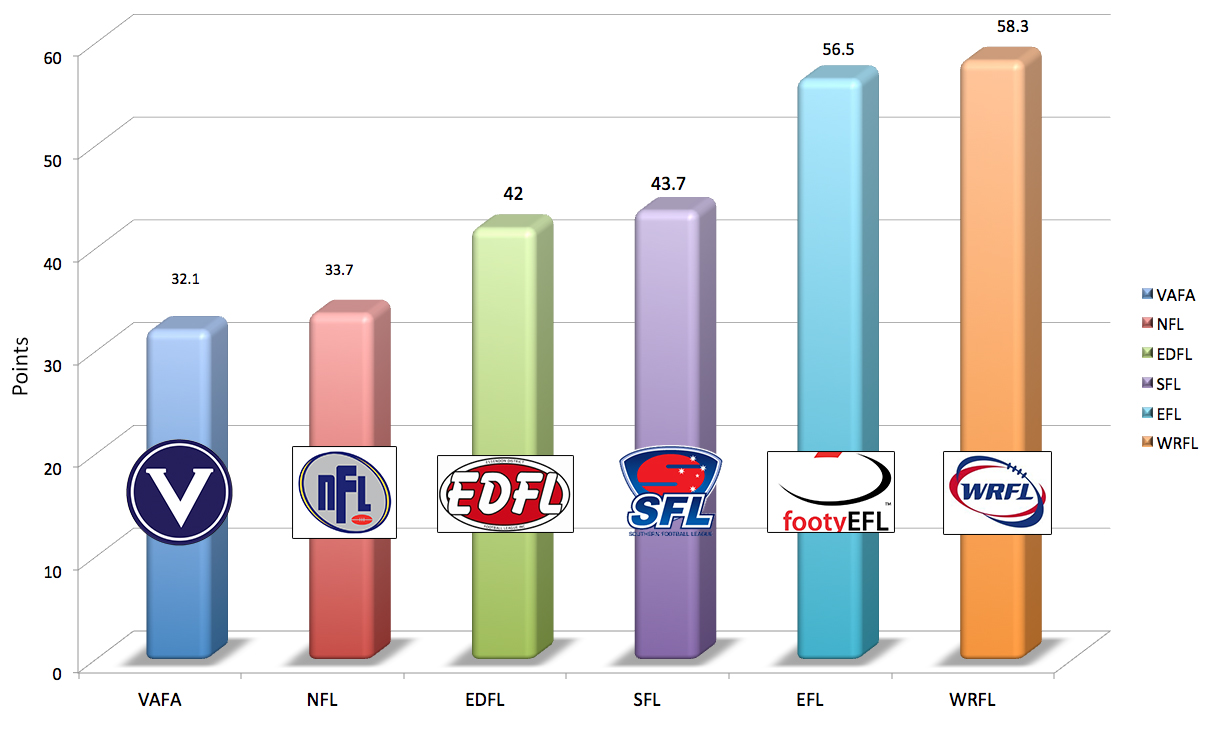 Michael Sholly’s Editorial this week looks at the competitive balance and average winning margins in all sections of the VAFA and compares to the other leagues.
As we look forward to the second half of the year and our team’s position in the battle for finals and relegation, it is worth taking a look our scores and competitive balance for the first nine rounds.
In the VAFA’s Strategic Plan, the aim is to have an Average Winning Margin at less than 50 points where the competitions are graded and less than 60 when it is geographically in our Under 19’s.
In our senior sections, five of the seven sections are under the targeted level. Division 2 is just over at 51.1 with Division 4 at 57.2. The relegation matches in the top six sections ensure all matches remain competitive until the end of the season. This obviously doesn’t occur in Division 4 and a new creative finish to the year may be beneficial to that section. Creative ways need to be considered to ensure the players in the lower clubs in that section remain motivated. One possibility is that after Round 9 the competition could split into two where the top 6 – 8 progress and the bottom 4 are either placed into the Club XVIII or Thirds competitions where a possibility of finals still existed.
Table 1: Shows the Average Winning margins for each senior section in each round to Round 9.

Table 2 (Top picture) Shows the WRFL: Western Region Football League; NFL: Northern Football League; SFL: Southern Football League; EFL: Eastern Football league; EDFL: Essendon & Districts Football League compared to the VAFA.
The second table compares our Premier Section with Division 1 in the other 5 metropolitan competitions. Our Premier Section provides the most competitive matches with an AWM of only 32.1 points. This is an excellent result and with the fight for relegation looking hotter than ever we would envisage that this would be maintained for the reminder of the season.
It is important to track ourselves against our rivals in Melbourne and it is pleasing to see that we are the most competitive. Our senior representative team have proven to be the best and one could translate that we provide the competition with the highest standard and these figures show us to also be the most competitive.
What these statistics prove to me is that the promotion and relegation system, which involves two teams, in our senior sections is the cornerstone that ensures our competitiveness. I will take a look at our junior sections next week; but it is also worth noting that the average winning margin in the AFL this year after 9 rounds was 37 points, so we are ahead there too.
In a poll held at  VAFA.com.au at the start of the week, most respondents assumed that the next closest to the VAFA in terms of winning margin would be the EFL, however it is in fact the NFL that rivals the VAFA for average winning margin in their top section.