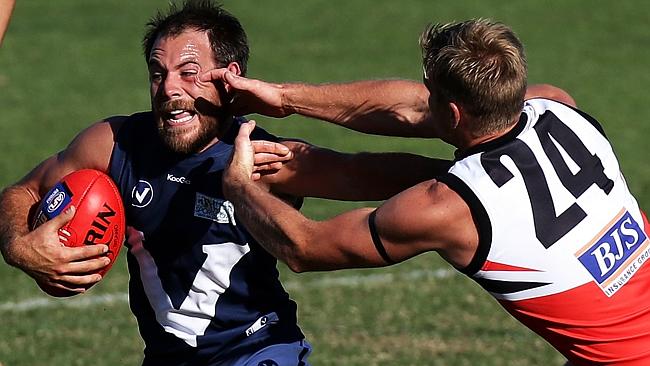 Barring that elusive William Buck Premier flag, there isn’t a whole lot Brendan Iezzi hasn’t achieved in the VAFA. The two-time Woodrow Medallist, four-time competition best & fairest winner and Old Trinity skipper has been the pre-eminent star of our Association for almost a decade and, as such, widespread disappointment followed his season-ending knee injury in Round 8 last year. Scans revealed he tore his ACL, MCL and meniscus, culminating in more than 12 months on the sidelines. Despite the significant layoff, Iezzi finally returned against University Blacks on June 25 and picked up where he’d left off. He played the ensuing 10 matches, polling seven Woodrow votes (two BOGs) and starring with a best-on-ground performance in the T’s semi-final victory over University Blues.

It was a year to forget for Brunswick NOBSPC as they found themselves in constant relegation talks in Division 1 with just six wins for the season. The situation was dire after their 61-point Round 15 loss to St Mary’s Salesian and it would take three consecutive victories to avoid relegation. Well, they did it. Wins against Prahran Assumption and Old Paradians set up a mouth-watering Round 18 clash with the higher-ranked Whitefriars. It was simple; they HAD to win to stay up. Trailing by 16 points at half time, things were looking ominous until Kyle Adams stood up with six majors leading NOBS to the unlikely, come-from-behind, season-saving victory at Whitefriars College.

Sam Cust was a standout for Old Carey this season as he consistently toiled away through the midfield and across half forward, creating little bits of magic as he went. None were more magical, however, than his goal against St Bernard’s in Round 13. Hitting the stoppage at full pace, Cust delivered a serious Goal of the Year contender and sent social media nuts with this piece of wizardry from the boundary.

Winning one premiership is hard enough let alone two on the trot. But Hawthorn Spartans (Club XVIII 1) and Caulfield Grammarians (U19 Section 2) did just that as they went back-to-back in their respective sections. The Spartans proved far too strong for St Francis Xavier when the two sides clashed at Sportscover Arena, keeping their opponents to just four goals and running out 62-point winners. The Fields had it tough after finishing in third spot, but rallied for elimination final victories over St Bedes/Mentone Tigers and Old Melburnians before edging past Parkdale Vultures in the decider.

Peninsula has been one of the unluckiest clubs since entering the VAFA in 1980. Despite eight cracks at a senior flag, they’ve been unable to obtain that elusive premiership. However, 2016 saw them climb to Premier B – their highest-ever section in the VAFA – after playing off in the Premier C grand final against Mazenod. The Pirates finished third heading into finals and demonstrated the depth of talent at their disposal as they as they rolled through both Old Ivanhoe and Caulfield Grammarians en route to their grand final appearance against the Nodders. They’ll now compete at the highest level in their club’s history and attempt to break that September hoodoo in Premier B.

Speaking about depth of talent, St Kevin’s can lay claim to one of the deepest lists in the Association after they took out both the Holmesglen U19 Premier and U19 Premier Reserve flags. Both sides finished on top of the ladder at the conclusion of the season and despite losing the Premier Reserve second semi-final, encountered few issues as they claimed the throne as undisputed U19 champions. Sustained success at the top level comes via depth of one’s list and SKOB have it in spades.

The future at Old Brighton is more than promising with young stars, Alex Mastromanno, Tom Fisher and Harry Hill stamping their authority on Premier B throughout the year. Each played representative football in 2016 but it was Hill who shone brightest as he won the Grill’d Rising Star Award and AFL Vic Country’s Best VAFA Player. Not only was Hill adjudged best young talent in the VAFA, he polled 15 votes and finished runners-up in the GT Moore Medal count by just one vote.

VAFAUA umpire, David Windlow, chalked up his 1000th game earlier this year when he officiated alongside his son, Tom, in Holmesglen U19 Premier. Commencing his career in 1973, Windlow has umpired 23 VAFA/Club XVIII Grand Finals and was appointed as the Clubbies/Thirds umpire’s co-ordinator in 1999.

Injuries and departures absolutely savaged Old Carey’s 2016 season. They had lost their first 11 games of the season and faced the dreaded donut before pulling out one of the most thrilling wins of the year. After giving up 204 points in their Round 6 clash against SKOB, the Panthers travelled to St Kevin’s College and upset the home ground favourites by three points. While the win was unbelievable in itself, there were two particular pieces of play which highlighted the Panthers’ victory: Jeremy’s Cator’s chase down tackle and Cameron Wallace’s cheeky sealer to put the Panthers nine points clear with less than two minutes remaining.

It’s safe to say most would have locked in Old Eltham’s Ben Gill to claim the Division 2 goal kicking award heading into Round 18. Gill had 69 goals for the season and was 10 clear of St John’s Aaron Thornton on 59. Gill went on to bag three against eventual premiers, Preston Bullants, and finished his year with an outstanding 72. However, in the JOC’s Round 18 clash against Richmond Central, Thornton went pure beast mode and bagged a club record and season-high 16 to come from nowhere and finish three goals clear of Gill on 75.