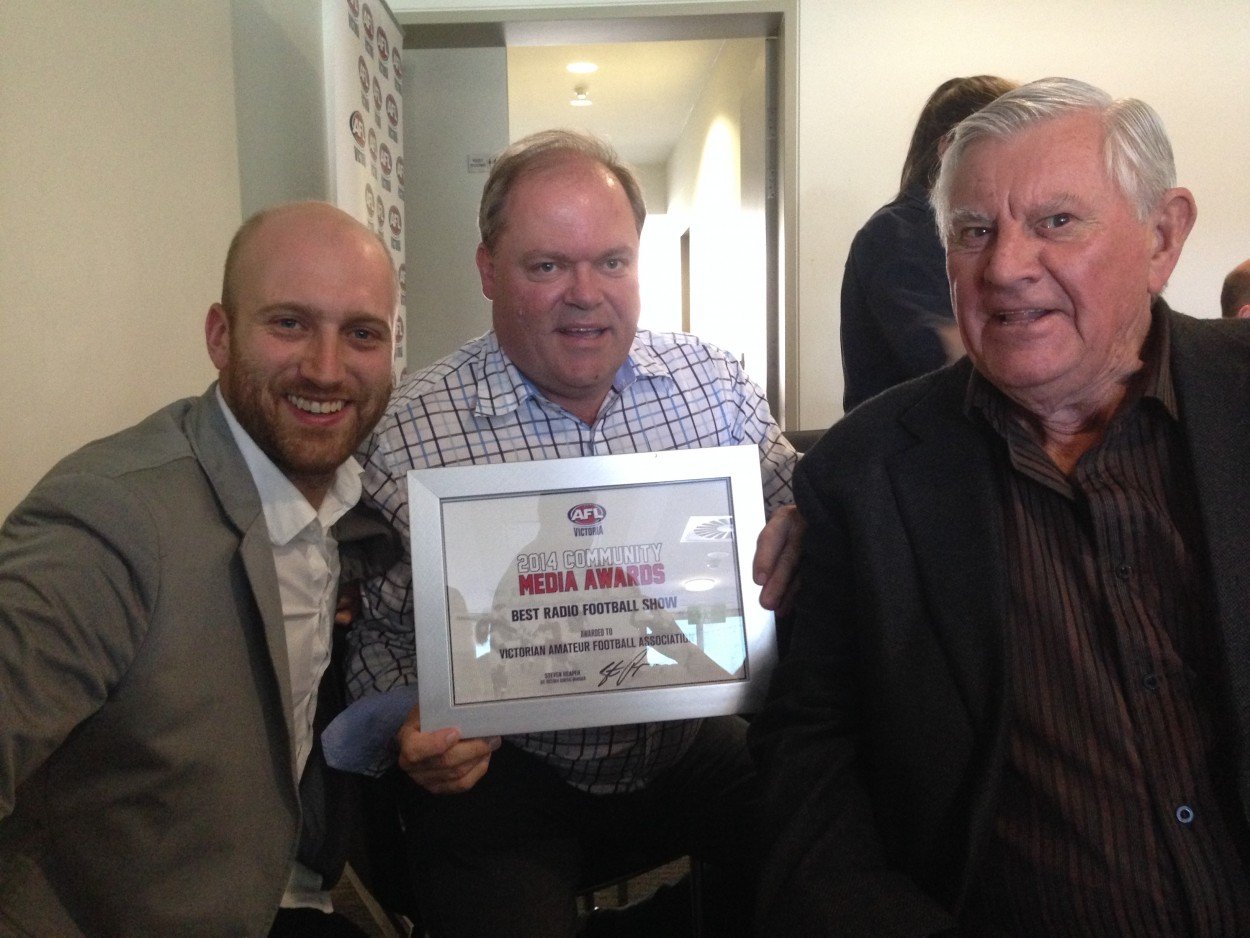 Congratulations to the VAFA Media team and the 96.5 Inner FM contributors who have been honoured by winning the AFL Victoria Community Football Media Award for the Best Radio Show of 2014 at the Awards lunch held at Visy Park on Friday.
The VAFA Football Show has been a Saturday morning staple for VAFA supporters over the past 15 years with Ken Petrucco and guests talking about the week’s action in the VAFA. With the VAFA working more closely with Inner FM in 2014, and with Ken unavailable in the early part of the season some slight changes were made to the format of the show in 2014.
“This year the show was built around a famous name that had played Amateur football in the past and when we looked down the list the names are a veritable who’s who of identities” said Andrew Leonard when accepting the award.
“We had many fantastic guests, from Peter Mitchell (7 News), Ross Stevenson (3AW), Andy Maher (SEN), Mark Robinson (Herald Sun/Fox Footy), the former Premier Ted Baillieu, and Ross Oakley (former AFL CEO) and many more all gave us at least half and hour of their time to talk about everything from their playing days to their professional lives.”
Leonard also thanked the founding father of the show Ken Petrucco and John Kanis who have been the mainstays of the show.
“Long time Inner FM lead broadcaster Michael Crooks suggested about 12 months ago that we should focus on the big names that have spent time in the VAFA talk with these people as a point of difference” said Leonard.
The VAFA beat off entries from the Essendon District Football League, the Southern Football league and the powerful Croc Media’s Sports Day show.
The VAFA were also nominated for Best Use of Online Media (VAFA TV – which the VAFA won in 2013), Best Matchday Radio Coverage (96.5FM – Match of the Day) and Best Online/Print Feature Article (Andrew Leonard – Rambo Calls it a Day), but missed out in these categories.
The AFL Victoria Community Football Media Awards have grown in popularity and since the Metropolitan competitions have been permitted to enter, the VAFA has managed to win an award each year.
“This has been Ken’s show for the past 15 years so I must thank him for allowing me to come in and host the show this year, thank you also to Michael Crooks who filled in as host on occasions this year also to John Kanis who would walk into the studio just as the ‘on air’ lights would flick on each week to talk about what has been happening in the VAFA each week” said Leonard.
“However many hands make like work and thanks must also go to those behind the scenes including Olivia Crowe who put much of the show together each week, and Ken and Anne-Marie who came in on Saturday mornings to put the calls through to all our guests whilst we were on air.”
“Thank you to all of our guests throughout the year, from the coaches, players, presidents and of course the VAFA scribes that gave up a part of their Saturday mornings before heading off to their VAFA game later that day – without you we don’t have a show.”
“Last but not least, the listeners, thank you firstly for listening and telling us you do listen and also for the kind feedback we receive when out at the grounds later that day” said Leonard.
You can listen to a number of the interviews that the show conducted below.
VAFA’s Past Wins
2012 – Best Football Column – Di Langton (Premier B)
2013 – Best Use of Online Media – VAFA TV
2014 – Best Radio Show – VAFA Football Show on 96.5 Inner FM