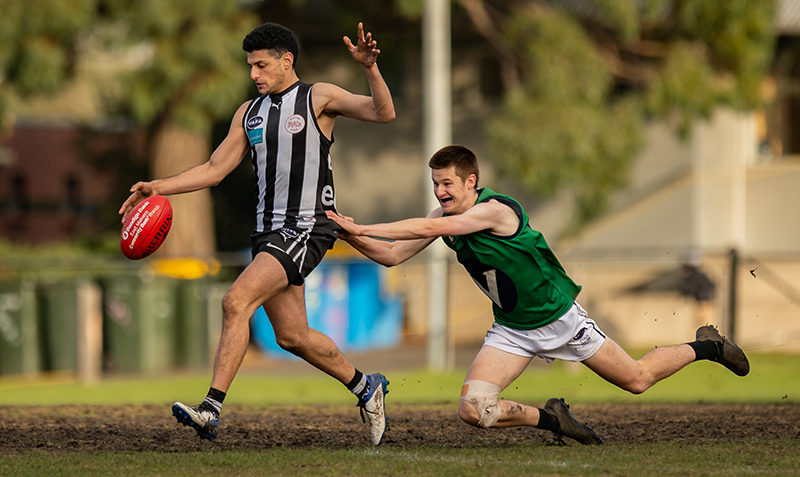 Aquinas were unable to make it a hat-trick of close ones when they fronted up to the ladder leaders Glen Eira on the weekend.

Despite an even opening quarter, the Gryphons flexed their muscles in the second quarter with 7 goals to open up a 41-point lead at the main change. 4 goals to Daniel McDonald and 3 goals to Bryce Judd helped the Gryphons to their 79-point win and gave Johnny Edgar’s side their 10th straight win on the season.

John knows all about the perfect season given he co-coached St Kevin’s when they went undefeated in 2015, so he will be hoping for much of the same when all sides return from the bye round.

Even though they were inaccurate in front of the big sticks, West Brunswick kept Ivanhoe AFC goalless after quarter time in their encounter at Ransford Oval. 2.9.21 to 3.1.19 at half-time in favour of the Magpies extended to 43 points by the final siren with Daniel Foott kicking 3 goals. Daniel Jones kicked 2 of the 3 goals for Ivanhoe with the loss now making the challenge to get to the top 4 even tougher with 6 games remaining.

For Nick Mitchell’s Magpies, it was their 4th straight win, and they’ll be hoping to keep that momentum going when footy returns, given their matches in Rounds 14, 15 and 16 are against their fellow top 4 sides.

VAFA Podcast favourites Old Parade made it 8 wins from 10 starts to extend their gap on 5th-placed Ivanhoe AFC. After jumping the boys from Yarra with 5 goals to 0.2.2 in the first term, the Grammarians were forced to do all the chasing from there on. Michael Scott played a helping hand for Yarra as best he could with 4 goals as they got within 7 points at the final siren.

They’re currently sitting in 8th spot on the table, a game and 21% ahead of Power House in the relegation zone. In the coming rounds they’ll face sides around them with the aim to win enough games to keep them out of the bottom 2 and in Division 2 in 2022.

Manningham Cobras exploded with 10 goals 3 after half time against Bulleen Templestowe to push them up the table from 7th to 6th and an added 10% to their season. Anthony Raso kicked 5 for the Cobras, while previous leading goalkicker Kane Maghamez found 4 of his own. On the flipside, Adam Lauria kicked 3 goals for the Ants. They’ll face Parade when they return from the bye and will fancy themselves a chance to get their first win of the season when they face Power House in Round 14 at Ross Gregory Oval.

After dropping the opening game of the season to Glen Eira, MHSOB have gone about their business methodically and in style. With just 3 scores below 100 for the season, they are the number 1 ranked side with points scored after 10 games (123.2 points per game). Even though they didn’t have it all their own way against Power House on the weekend, a 15-point 3QT lead blew out to a final margin of 71 points with 9.3.57 to 0.1.1 in the final term. Ashun Wijayakumar slotted another 5 majors to put him back on top of the goalkicking tally with 40 for the season, Kane Smith also helped himself to 5 goals.

For Power House Stubbs, Hill and Nannery kicked 2 apiece but in the end ran out of steam against a side hellbent of going deep into September.

In the final month of the season, MHSOB will be having a mini final series of their very own before the finals officially kick off when they face off against the other 3 sides in the top 4.