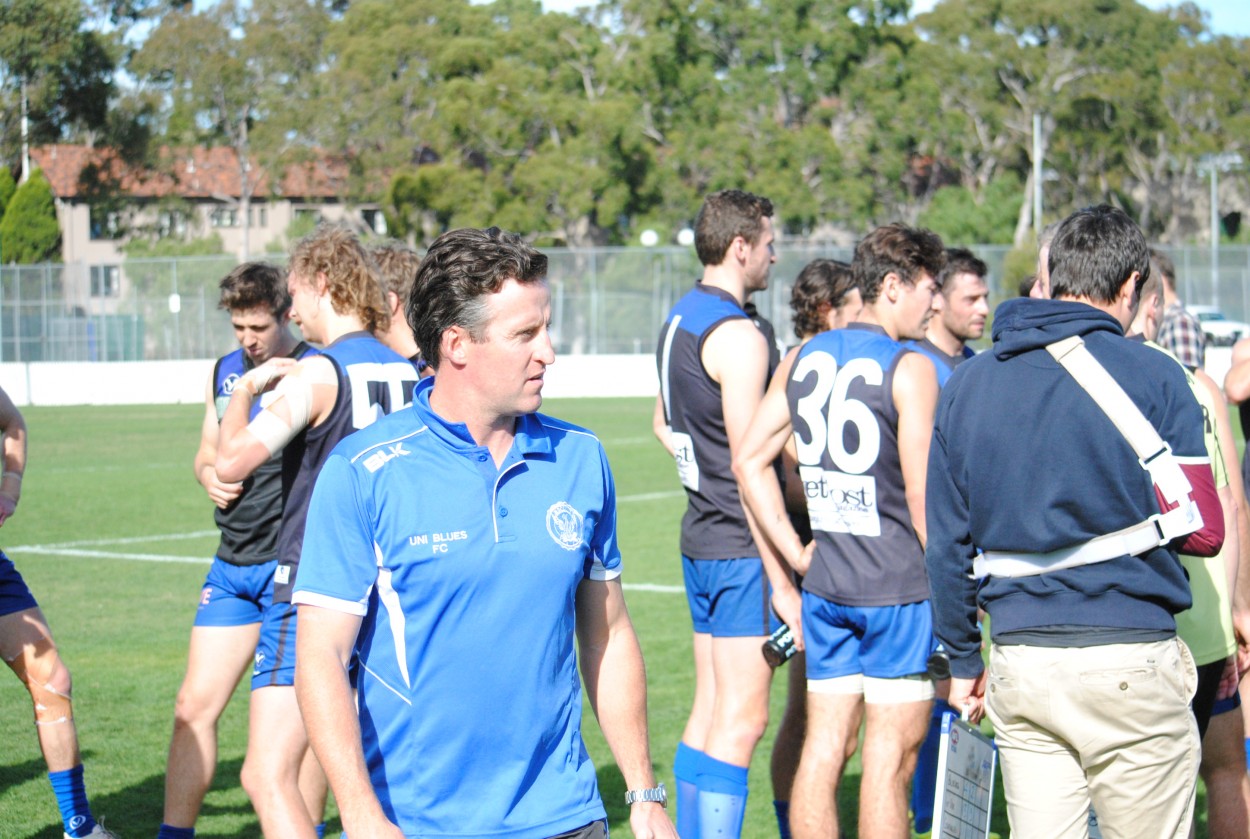 What the clubs said Rd 2

Here is what the clubs said after the weekends games

After a confidence boosting first up win against the reigning premiers, University Blacks, the Cards had another test on a perfect day at the almighty K2 against an always fast and skilful De La Salle.

The Cardinals jumped out of the blocks well in the first quarter putting some early pressure on the scoreboard with the margin quickly extending to 18-points. It was very fast paced end to end footy which saw two very similar game styles going head to head. De La managed to hit back strongly with the Cards leading by just 8 points at quarter time. Margitich was very busy early while Perry was proving to be an absolute handful up forward gliding onto his left boot on a couple of occasions. (Read More)

University Blues website after their 62-point win over Beaumaris

Beaumaris has a good record at the Uni against both Varsity sides, and the Blues were outclassed by them both home and away in their only season in the same division in 2013. However, that was a very different Blues outfit from the 2015 version and with 2 more debutants this week (Quinn and Kitchen), both sides got down to business.

St Bernards website after their 67-point win over Old Xaverians

After St Bernards narrow loss to Trinity in round one and Xavs solid win over Collegians the round two clash between the traditional rivals was considered an even money bet by most pundits.

On a perfect deck at Toorak Park the game opened at a furious pace with both sides looking to take the early initiative. Debutant Adam Campbell made an immediate impact with some strong marking that produced two early goals while at the opposite end Xavs skipper Mark ‘Chopper’ Handley pushed up high before snapping Xavs second major to keep his side within 12 points at the first break. (Read More)

Facing a bit of a danger game against impressive first Round winners Hampton Rovers the Senior side was keen to put the disappointment of the previous week behind them. A pretty confident first half saw us in front by 30 points at the main interval. But then for some inexplicable reason we went to sleep in the championship quarter to find ourselves a small margin down at the orange break. (Read More)

This week we travelled to Gary Smorgon Oval at Albert Park to take on Ajax looking for a win to make up for the disappointing result against Caulfield last week. With a few changes to the team we were expecting to be more dominant in the forward line where we fell short the previous week. Although still a predominantly young team our average age was lifted somewhat (a fair bit actually) with the return of the old warhorse Paul Sullivan and Guy Crilley, a last minute stand in for Mick Meyer who was not quite ready to step up into the senior team after injury. (Read More)

Oakleigh AFC website after their 1-point loss to Therry Penola

Round two of the VAFA Premier C season saw Oakleigh travel across town to John Pascoe Fawkner Reserve for a triple header against Therry Penola, a club the Krushers had not crossed paths with a quite some time. After last week’s outing against Old Camberwell and the fact Therry had a bit of a shocker against Old Haileybury, the Oaks were probably a bit confident of a good result. However, the hosts were out to make amends for the previous week’s performance and had the Oaks rattled with a couple of quick goals before Oakleigh had even had time to scratch themselves. (Read More)

Prahran Assumption website after their 12-point loss to Kew AFC

The Kew Football Club handed Prahran Assumption its second consecutive loss to start the 2015 season with a 12 point victory on Saturday afternoon. In a heated contest Prahran could not contain the run and carry of Kew, surrendering late to fall short 15.17.107 to 14.11.95. The vocal crowd on hand at Victoria Park in Kew rode every bump and tackle as they were witness to an enthralling battle between the two sides. (Read More)

That old adage that discipline wins games rung true in the Seniors game with the snakes all over Parade for all but 15 minutes. We had more scoring shots and won 3 of 4 quarters but a team-wide brain fade in the 2nd quarter saw Parade put on 11 goals to 2, at least 6 coming directly from free kicks gifting them a 43 point lead at the half. (Read More)

Powerhouse website after their 35-point win over La Trobe

The Seniors entered this match with a ‘win at all cost’ attitude, Coach Voyage had been stressing all week the importance of this fixture! The match was very tight in the first half, Ben Circosta was providing great run, unfortunately his brother Steve was injured and left the ground early, adding to this Andrew Kuhanez had to come off also. At half time it was 5 goals apiece and the match was in the balance.

In the 3rd Quarter the PHAFC stepped up and ran riot, a 6 goal to 1 goal term really set it up for the House, both Collett brothers hit the scoreboard well and ended up with 3 goals each, Burnside was rucking everything and Baker was cleaning up all across the ground. Rhys Gregory and Irishman Aidan Reynolds were fantastic across half back with their rebound and run. (Read More)