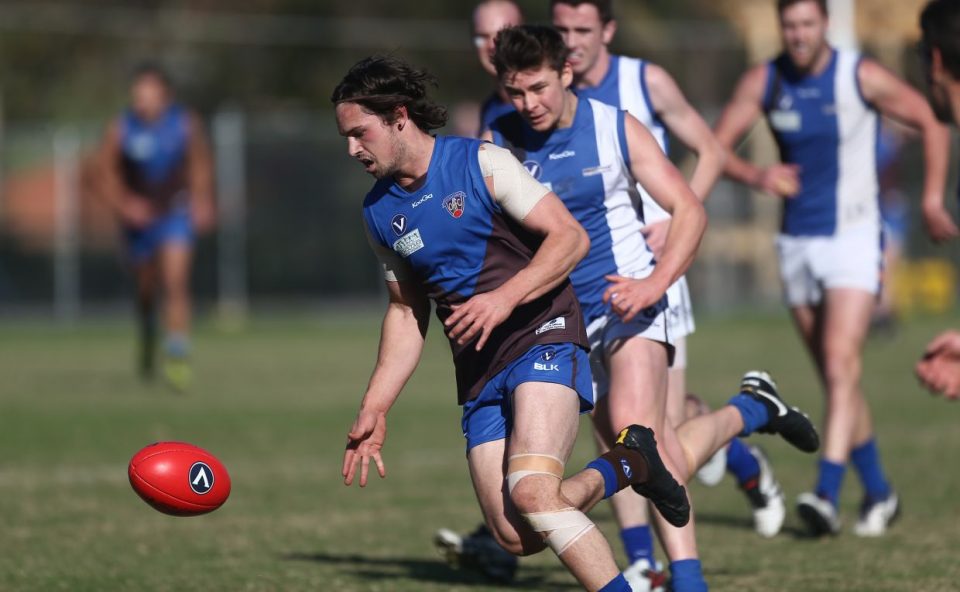 When the wind is the real winner in Premier C

The gusty autumn wind was the winner last Saturday, causing teams all sorts of havoc in Premier C. Six of the 10 teams kicked more behinds than goals, in fact, across all games last Saturday, there was a total of 129 behinds. Mazenod remain on top of the ladder, but were not gifted the four points last week. Williamstown CYMS enjoyed a comfortable victory against Marcellin who will find it difficult to play finals from their position. Caulfield hold onto third spot after their courageous win against Kew. Peninsula continue to score big as they chase top spot. Old Ivanhoe’s inaccurate kicking in front of goal restricted what could have been a huge deficit for Old Camberwell.

After a low scoring affair in the first term, Old Camberwell found their groove in the second quarter and had it not been for inaccurate kicking in front of goal, could have had a strong lead at half time over Old Ivanhoe Grammarians. The Wellers dominated the second quarter with ten scoring shots to Old Ivanhoe’s five and regained a seven point lead at half time. Sam Geilings began to have an impact stopping the constant Wellers attack, clunking 15 marks for the day. Again, Old Ivanhoe did the work in the ‘premiership quarter’, led by Adrian Del Monte who kicked four in the term. The last quarter was an even dual with both teams missing shots for goal as the final margin stood at 37 points. James Allen was best on again for the Wellers.

Ladder leaders Mazenod, fought hard for victory over cellar dwellers Ormond. Despite holding onto the lead all day, Mazenod only had 1 more scoring shot but prevailed by 16 points. Ben Phibbs continues his great form this season managing two majors for Ormond. But it was Mazenod’s third term, when the kept Ormond goalless and had 10 scoring shots themselves that inspired their victory. Luke Duthie bagged three in his first game for the season whilst veteran, Simon Keleher continues to bring his country toughness to every contest.

Williamstown registered their biggest win for the season doubling Marcellin’s scoring shots, kicking 19 goals and 17 behinds. Samuel Callard played his best game for the season whilst the Read, Puhar and Parkinson trio combined for 11 goals. In fact, the trio have combined for nearly 30 goals this season and are causing headaches for opposition. Nicholas Crosbie played well all day for Marcellin and Andrew Kay kicked three to bring his season tally to 10. 2015’s ‘team of the year’ wingman Ash Viney finds himself in the best again for Marcellin, hitting some hot form. Any doubt regarding Williamstown’s scoring capabilities with key forward Ebinger missing due to VFL commitments have been diminished as they average the third highest score this season.

Kew’s last quarter comeback fell just short as they went down to Caulfield Grammarians who now sit third on the ladder, behind Peninsula who carry a hefty percentage. Declan Reilly was superb, kicking five goals in a best on ground performance bringing his seasons tally to 13. This weeks Rising Star, Liam Kinsella continued his red hot form, kicking three goals combining with Andrew Brazzale as a dangerous duo. Kew’s 2015 B&F winner, Jack Delbridge continues to do what he does best, shrugging tackles and feeding the Kew forwards. Caulfield’s dominant third term proved to be too much thanks to an impressive Dominic O’Keefe. Caulfield finished the game eight points clear and play fifth spot Williamstown this weekend.

Peninsula have the highest scoring average in Premier C, as they continue to play an attacking brand of football and are reaping the rewards for their risk. Young gun James Fletcher oozed class through the midfield combining well with the senior Pirate recruits. Jeremy Gleeson was instrumental in his first game for the Pirates returning from VFL commitments to play a major role in the Pirates win. Trevor Bromley and Aaron Cloke did all they could for the Krushers and were Oakleigh’s only two goal scorers on the day kicking 4 and 3 respectively, bringing their combined season tally to 30.The Pirates never looked challenged, running away 47 points clear.