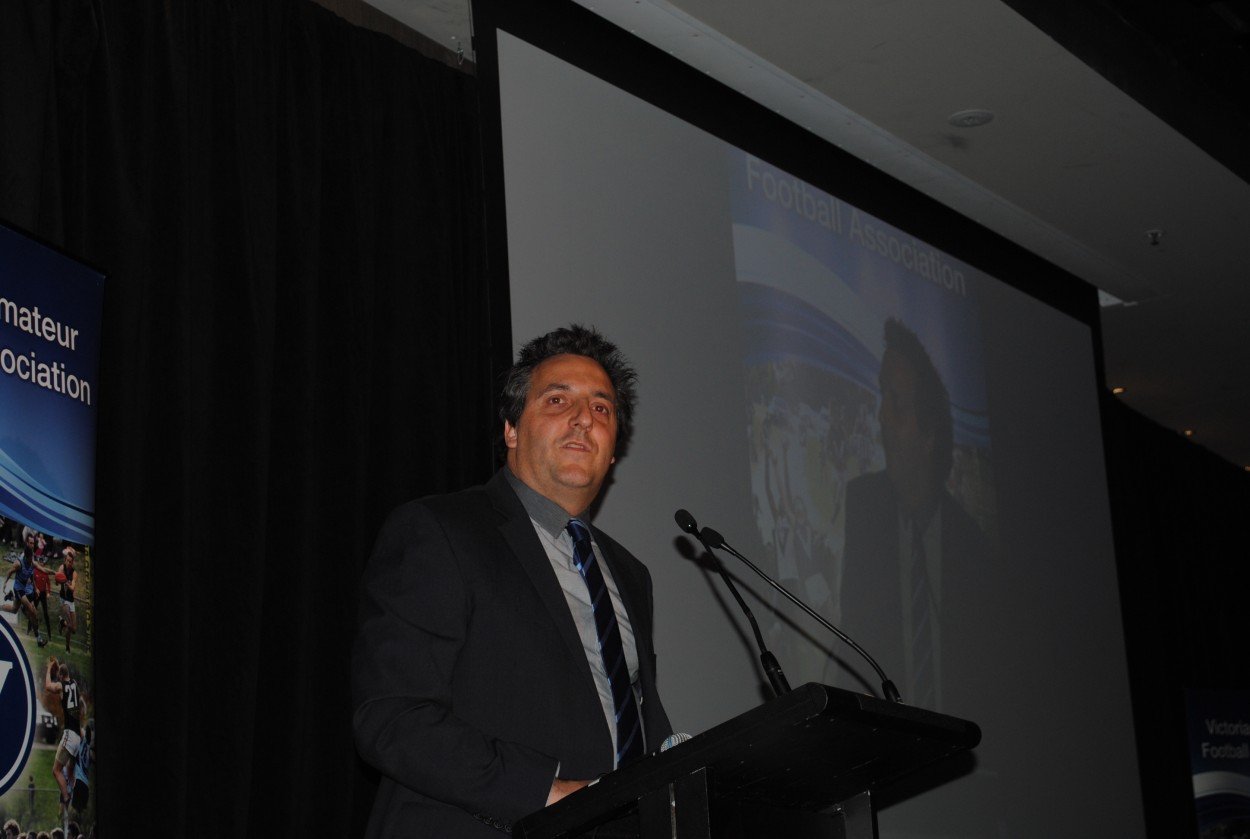 Where to for Australian Rules Footy?

What is the future of Australian Rules football in a society that is less inclined than previously to participate in team sport, despite this trend, the VAFA and team sport are an integral park part of what makes our society great. VAFA President, Michael Hazell addressed this question in his welcome speech to a packed MCC Members Dining Room at the VAFA Sportscover 2015 Season Launch.

Welcome to the 2015 VAFA season, the Season Launch is a great night on the VAFA calendar, so it is wonderful to once again see a packed house supporting the night.

What started as ten clubs in 1892, is now over 70 clubs across the north, east, south and west of Melbourne.

I wonder what they did for a season launch back in 1892?

A look back over the history books showed that picnics and dancing were of the more favoured ways of celebrating an occasion in the 1890s. Can you just imagine us all setting up our picnic baskets and then breaking into a dance?

I probably can imagine it given that a further read of the history books also indicated that some of these picnics lasted for an entire week !

I am sure plenty will be said about this occasion by others in our VAFA community over the next month, so I won’t speak too much about this tonight.

Other than to say that of course, sadly, many of our VAFA players were affected by World War 1. As difficult as that is to imagine, our VAFA players back at your clubs heading off to war, this is what happened between 1914 and 1918.  The VAFA in fact was forced to disband the competition from 1916 to 1919 due to the war.

As I said though, I am not here to tonight to talk about WW1.

However, the WW1 is a very apt lead in to what I want to talk to you all about briefly tonight.

I want to talk to you about some recent changes in the psyche of Australians when it comes to sport – and how that change in psyche might create a real opportunity for Australian Rules football at community level.

As you might imagine, given the circumstances of life behind the trenches at war and the lack of entertainment –  it was sport, and in particular Australian Rules Football and cricket, that was a means of maintaining morale during the War. Since sport was such an integral element of Australian culture, playing sport was a way of asserting identity on the war-front.

For this and many reasons, team sport has always held a certain stature in Australia through the 19th century – both at elite and community level.

Team sport is how we have defined ourselves as a nation, and below that at community level, how we have come together to socialise and connect.

To start to answer this, I wonder if you have all noticed the shift in the culture of sport that has occurred since the turn of the century only 15 years ago.

The cultural shift I am talking about is the change in sport and fitness habits in Australia since the turn of the century.

Sport has become, for many people, a very individual thing.  Preferences have changed. Team sport, is becoming much less relevant.

What is my evidence for this?

Collating various research, the suggestion is that since the year 2000, running has grown 70%, cycling has grown 45%, walking has increased 44%, and general individual fitness activities such as going to the exercising on ones own, going to the gym, personal training, aerobics, etc has grown 110%

Team sports haven’t grown in popularity – at best staying the same – and for many sports, dropping in popularity.

The only exception to this shift towards individual sports seems to be outdoor soccer.  It has managed to beat the trend and have significant percentage increases in participation rates since the turn of the century.

Further evidencing this growth in non-team (individual) physical activities is the fact that fitness centres have increased in numbers by 24% in the past ten years, and their income has grown 131%.

And this change is not just affecting those who are over 30. It is effecting everyone. Even those young boys and girls who are enjoying playing team sports are watching their parents or friends spend significant amounts of time in non-team (individual) physical activities.

So why has there been this shift?

Let me give you a few reasons put out by the researchers:

This is all an interesting shift, and it keeps the researchers in business – but does it really matter?

Playing devil’s advocate, you could argue that people trying to get healthier and fitter is a good thing. Why should it matter that team sport drops away?  People doing more individual sport would invariably lead to good outcomes such as lower obesity, better mental health, and happier and fulfilling lives.

But let’s say it does matter.  And let’s say that understanding this research and understanding the shift that has occurred might give us some assistance with decision making in relation to Australian Rules football for the next 5 to 15 years – especially at community level.

There is a real positive out of all this research. Large amounts of people seem to be turning to sport to get fit. It is just that it happens to be in the main, individual sports.  So there is an opportunity here for Australian Rules Football.

So how could we practically take advantage of the opportunity – if we wanted to do that?

It is a very difficult question to answer without saying “let’s turn Australian Rules Football at senior community level on a weekend into something akin to 20/20 cricket”.

This is not what I am suggesting is the answer. Far from it.

The challenge is to come up with ways which do not play around with the fundamentals of what we love about Australian Rules football.

Let me try and give a few examples:

In relation to the games themselves, what could we do to reduce “committed inflexible” time?

Could we reduce half time to five to seven minutes and have automatic swapping over at quarter and three quarter time (allowing say one minute for a drink), and we bite the bullet and reduce quarters to 17 minutes plus time on. By having only one a minute break at quarter and three quarter time, I bet you won’t notice the shorter quarters. In fact, the game will probably feel longer.  And rotations mean people now get more rest during a game.  Based on my calculations, that reduces the amount of actual game time from start to finish from something around 150 minutes to something around 95 minutes.

In relation to training:

Of course not everyone would be able to turn up.  But maybe no less or more excuses than for a normal Tuesday night.

It might work. If it doesn’t work now, it will probably work in the future as work flexibility increases even more. Why can’t your club be a first mover?

I am sure we could all think of many more suggestions to reduce committed inflexible time which doesn’t result in a loss of the fundamental things we really like about our game.

I should put a rider on all this. None of the suggestions I have mentioned above are being discussed at the VAFA.

All I have done tonight is provide some food for thought for everyone here and shake the tree a little bit to see what might drop out. One of the things I have really loved about being VAFA President is challenging the usual thinking in relation to things and putting that thinking out to all you people and hearing the feedback.

As a footnote, it is worth noting though that the VAFA in 2015 is giving clubs a reasonable break as a trial.  There is a break from 27 June to 18 July across all our grades.  Hopefully this means that players and volunteers approach their season knowing that if they want to take a decent break, they can.  And if they want to go overseas with their mates, they can choose this time to do it.

Let’s see how it goes.

In closing, I hope your year is a successful one.

Thank you for listening and giving me your time. Enjoy your evening.

Let us know what you think of any of these ideas below in the comments.