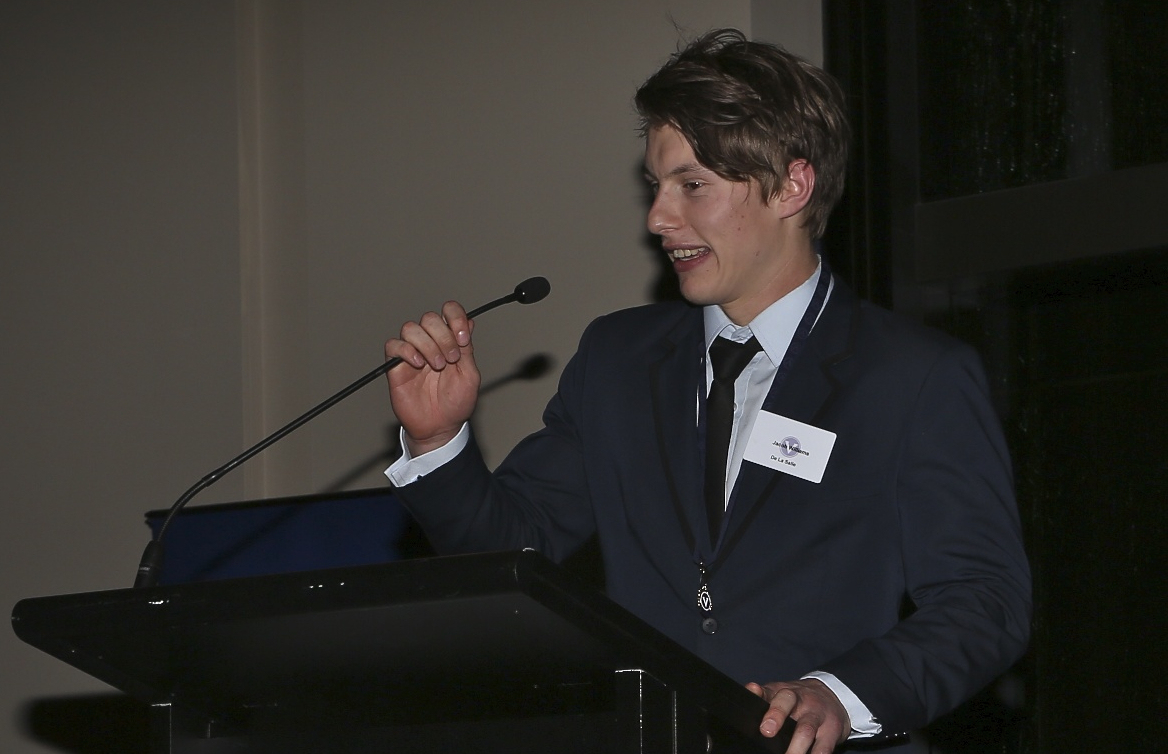 De La Salle’s Jacob Williams 19, last night won the Woodrow Medal in a very exciting count held at Crown’s River Room. Williams polled 22 votes across the season to finish 2 votes ahead of Nick Jamieson of Old Scotch. In joint third place was pre-count favourite Ross Young (University Blues) and Tom Dean (Beaumaris) on 18 votes.
These four players were all a chance to win the Woodrow going into Round 18 however Dean only managed one vote whilst Young failed to poll in Blues’ draw with St Bernards. Jamieson polled three votes for Old Scotch to momentarily take the lead from Williams before the final votes of the night were read out with J Williams claiming three votes against Old Carey to win the medal.
The Premier B (Brendan Iezzi) and Premier C (Jarrod Carlson and Tim Bourbon) medallists were also presented with their medals on the night with Carlson speaking on behalf of the group in glowing terms of just how enjoyable it is to play in the VAFA.
The Division 1 Pepper Medallist Leigh Flether along with Division 2 winners James Amos, Division 3 winner Dimitri Dimakopoulos and Division4 winner David Tremewen were all presented with their medals with Fletcher speaking on behalf of the group.
The Unders medallists were also presented with their best and fairest medals. The U19 Premier C.R Newbury Medal Brett Denton (St Bedes/Mentone Tigers), the G.W. McTaggert Medal U19 Section 2 Sam Hibbins of Collegians, the I.A. Brown Medal for U19 Section 3 Moustafa Hammoud Northern Blues, the H. Harisiou Medal (U19 North) – Kyle Buchanan (St Mary’s Salesian) & Maxwell Kirwan (Old Ivanhoe), the U19 South Medal – Adam Hardeman (Beaumaris) and the U18 Medal – Joel Dale (Kew) were all presented. Hammoud responded on behalf of the under age medallists and thanked the VAFA and on a personal note his team.
Chris Mangoni (St Bedes/Mentone Tigers) was presented with the Rising Star Award and Brendan Goss was presented with the Premier Section Leading Goalkicker Award. Both were quizzed by MC Nick Butler on their respective side’s chances of winning the Premier Grand Final on Saturday.
Last night’s event was also broadcast on 96.5 Inner FM with Michael Crooks, Ken Petrucco and John Kanis interviewing all the leading contenders in the room as the count progressed through the night.
A full list of the vote count is published below.