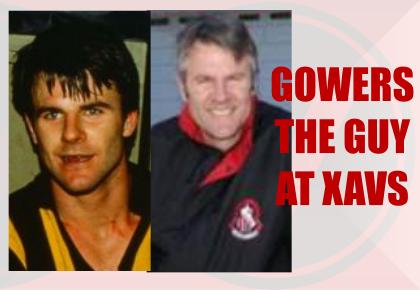 With dual premiership coach Simon Lethlean putting away the whistle, Old Xaverians has again looked within its own ranks to find its new coach.
It didn’t need to look too far to find their man and has appointed Andy Gowers as its new senior coach.
Andy book-ended his career with premierships at Old Xavs in the U19s in 1987 and seniors in 2000. In between, Gowers played 89 games at Hawthorn (1991 premiership) and 51 games at Brisbane (Bears and Lions).
Old Xaverians President Simon Hunt said that “Andy’s playing credentials and experience speak for themselves. He has been coached by some of the great modern day coaches including Alan Jeans and Leigh Matthews and his family has a long standing involvement with the club, with his father Trevor captaining the club from 1969-73.”
“I will continue the coaching approach of this great club based on work ethic and discipline in all areas. I am delighted to be given the opportunity to do so,” said the new coach.
Captain of the Big V in 2000, Gowers has been an assistant coach at Xavs for the past three seasons.