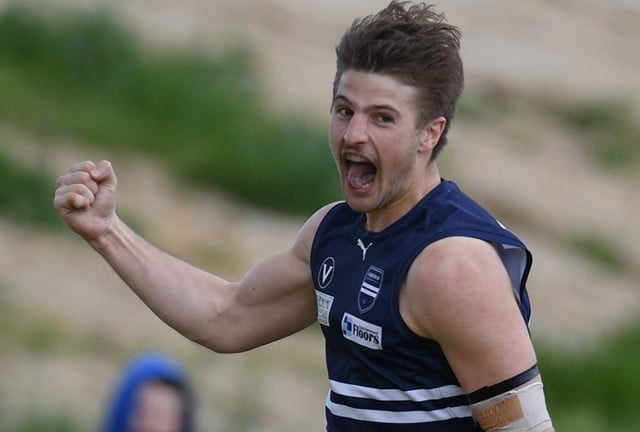 Old Xaverians moved into second spot on the William Buck Premier ladder after they defeated Old Brighton by 41 points in a bruising affair at Brighton Beach Oval. After holding the Tonners to just two goals with the breeze in the opening term, Xavs controlled the game for most of the day thereafter with 15 goals to seven, including six in a dominant final term. Will Hams starred across half back and seemingly had the ball on a string for Xavs, while Xavier Richards (4), Ryan Schoenmakers (3) and Michael Batten (3) did the damage in front of goal. Callan Wellings was outstanding on debut for the Tonners, as was Joel Crocker. The Tonners were hampered by a hamstring injury to star forward Jack Watts in the third term.

Six goals to one in the final term helped St Kevin’s OB retain top spot on the ladder as they defeated St Bernard’s by 33 points at TH King. SKOB led by just three points at three quarter time but finished with a flurry on the back of a BOG performance from Josh Wallis and three goals from Phil Edgar. Daniel Hanna returned to the Snow Dogs’ back 50 with a standout game, while Ben Overman continued his hot form and kicked two goals. SKOB stands alone at the top with just the one loss for the season.

Caulfield Grammarians made it four straight wins on the weekend, running over Old Scotch to the tune of 73 points at Glenhuntly Oval. 10 goals to one in the opening half set up the win for the Fields and their third score of 100 in four games, with Brett Eddy taking control up forward and kicking a game-high four. Dane Crognale delivered his strongest performance for the winners, while Tom Ansell and Andrew Jelbart put in another stellar performance for Scotch.

University Blues returned to form in emphatic fashion as they defeated Old Trinity by 63 points at the Uni Oval. Coming off a loss to Scotch, the Blues had their strongest start for the year with 12 goals in the opening half. Kieran Harper and Alex Fasolo proved a handful for T’s defenders with four goals each, while Meyrick Buchanan finished with two and was named best afield. Christos Manoussakis found plenty of it for the second week in a row for the T’s as they continue their search for their first win.

Old Melburnians snapped a two-game losing streak with a 19-point victory over Collegians at Harry Trott. In a low-scoring affair (46-65), OM’s applied scoreboard pressure early with three unanswered goals and maintained their lead throughout the day. Sam Dunell (4) and Jackson Paine (3) were impressive up forward for OM’s and Nick De Steiger was at his dominant best in the ruck. Tom Sheridan returned for the Lions and found plenty of the ball alongside Viv Michie.