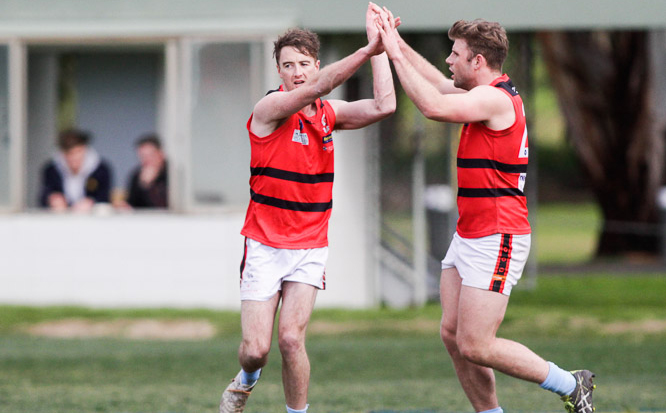 While Fitzroy toppled Beaumaris in Premier B, Oakleigh upset Mazenod in Premier C and favourites fell in most other sections of the VAFA, Round 16 of William Buck Premier was arguably the most scripted week we’ve seen in 2016. Each team expected to salute actually tasted success.

While no outcome would surprise given the tight-knit nature of the season, each team superior on the ladder were victorious but the result still left the door ajar and interest engaged for both finals and relegation.

De La Salle kept the thought of finals afloat as they snapped a five-game losing streak with a 69-point victory against St Kevin’s. All the heavy artillery fired for De La as Jake Williams, Hugh Nicholson, Tom Humphrey, Xavier Murphy and Matt Fieldsend imparted themselves on the contest. After 14 games in the reserves, Callum Dooley made his second appearance in the seniors and proved the match-winner with six majors. After six weeks of disappointment – featuring a fall from first to fifth – De La returned to the form we know they can produce and gave themselves a chance at finals with games against Old Melburnians and Old Carey in the next two weeks. Trailing the Blacks by one game and 17.36% means they’ll need to win both and win them convincingly though. While finals were out of the question prior to the game, the loss was St Kevin’s biggest for the season and against a team at the bottom end of the form guide. They’re still two games clear of relegation but will be keen to redeem themselves with a strong showing against the T’s.

Despite a four-goal second term and drawing level at half time, Collegians were unable to kick a major in any other quarter and went down to University Blacks by 24 points at Harry Trott Oval. It was all Blacks in the first term as Tyrone Bean nailed two of his side’s four goals. Trailing by 27, the Lions tied things up via four unanswered goals to Will Johnson (two), Dom Russo and Tom Penberthy, but were unable to sustain the intensity in the second half as Adam Pitt, Brent Sheahan and Hugh Curnow starred and helped the Blacks to the final three goals of the match. Bede Mahon was well-held for the first time this season but, as with any good finals-bound team, others stood tall with Sheahan, Curnow and Tyson Kruse winning plenty of the ball. For how good the Lions are defensively (64PA), the lack going the other way (58PF) and will want to find alternative avenues to goal as they continue to try and stay in William Buck Premier.

A 28th-minute Dan Batarilo goal in the fourth term gave University Blues a six-point victory against Old Melburnians and helped them retain the number one ranking. Trailing by 18 points at the last break, OMs kicked the first three goals of the fourth before Batarilo embodied his inner Tony Modra and kicked the match-winner while facing the opposition’s goals. The Blues should be proud of their ability to stave off a talented OMs unit given they were missing Jeremy Mugavin (illness), Pete Summers (illness), Tom Silvestro, Dale Hinkley and Jeremy Taylor. The loss means the end of the OMs finals run as they fall two and a half games outside the four. It’s been an impressive year for OMs and they have now built a platform which will see them compete in William Buck Premier for years to come.

It was consecutive win number seven for the in-form Old Xaverians as they defeated Old Carey by 69 points at Carey Sports Complex. Once again the goals were shared as Tom Anderson, Robert Ralph and Tyson Thomas registered three each. Xavs are an attacking juggernaut at present, with a percentage of 145.77 more than 15% above its nearest rival. While form is not an issue, the biggest challenge for Xavs over the next fortnight will be knocking off either Uni Blues or Old Trinity and booking a double chance. So much rides on the Panthers’ next two weeks as they face Collegians and De La; two sides battling at either end of the ladder. One win could throw everything in the air.

The T’s refuse to give up their double chance as they cruised to a 57-point victory against St Bernard’s at Daley Oval. Importantly, Seb Nicolosi returned to the line-up and bagged four goals alongside two from Brendan Iezzi, Ed Weatherson and Jack Osborn. While Jack Hunt is the renowned barometer for the green and gold, a lot could be said about Andrew Kyriacopoulos after he starred in the same fashion he commenced the year. Of his five best-on-ground performances this season, Kyriacopoulos has recorded four of them in T’s wins; an obvious sign of his ability to have a real impact on the team’s success. After the two sides played off in an epic William Buck Grand Final last year, the T’s and Snow Dogs haven’t shared the same contests in 2016 as the T’s claimed victory by 32 and 57 points, respectively. The Snow Dogs are far from resigned to Premier B in 2017 with a lot yet to unfold this season but we hope the next close clash is just around the corner.